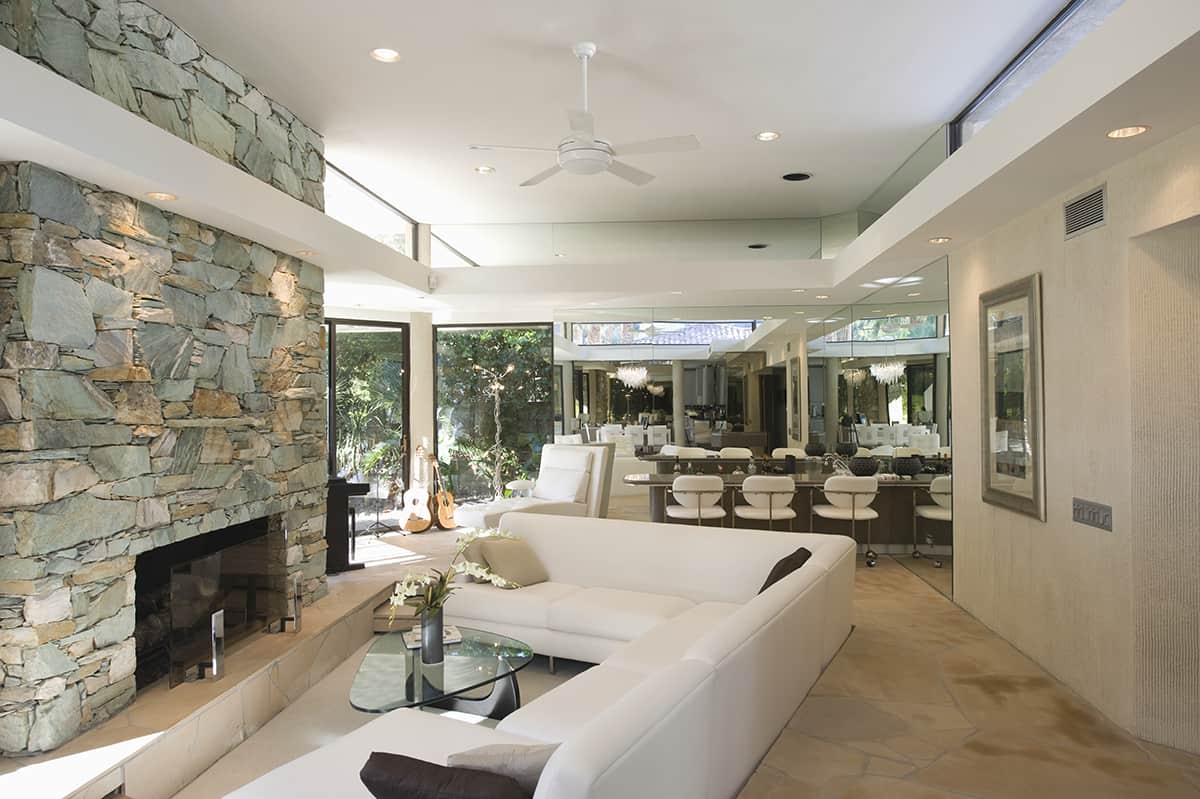 Here we look at ceiling fan colors and when you may want them to fade into the background or make a feature of them.

Should Ceiling Fans Blend into the Ceiling?

The simple answer to this is, only if you want them to. 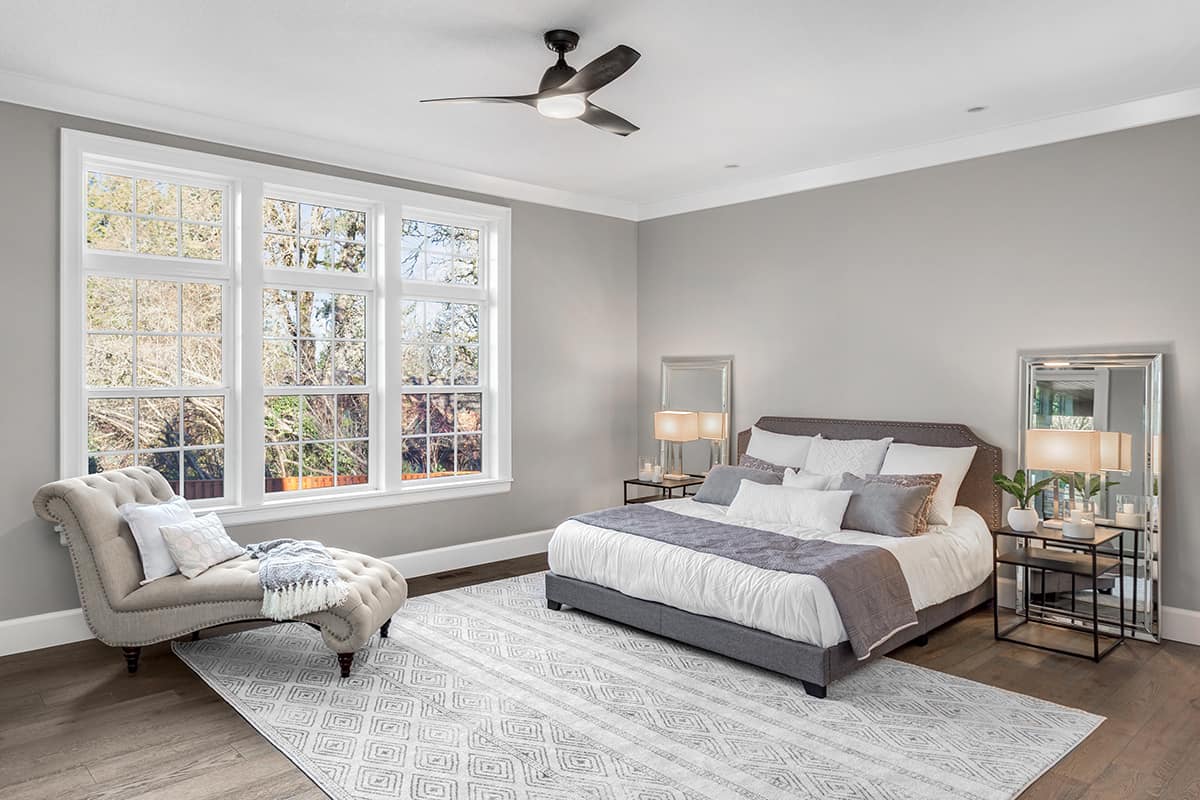 In most homes, ceilings are white, so if you want your ceiling fan to blend in, then choose a white fan and then forget it is even there.

Some people simply don’t like the aesthetic of ceiling fans and think they should be a functional item rather than a decorative one. If this is your standpoint, you should choose a ceiling fan in the same color as your ceiling to allow it to fade into the background.

By choosing a fan in the same color as the ceiling, the fan won’t attract attention, and given that it will be fitted close to the ceiling, most people won’t ever notice that it exists.

If you have a dark ceiling, then the same premise applies; choose a dark-colored fan in the closest color match you can find. For wood-paneled ceiling options, choose a ceiling fan with wooden paddles to help it camouflage into the background.

If you need a ceiling fan in your room to help with heating or cooling, then you may feel it is better to make a feature of it rather than try to hide it in plain sight. Though many old-style ceiling fans were not particularly attractive, there are actually now a wide range of ceiling fans available that have been designed to look modern and stylish for the contemporary homeowner.

If you want to make a feature out of your ceiling fan, then choose a design that appeals to you in a color that will contrast the ceiling color, but complement your overall decor.

If your interior decor is gray and blue, for example, with a white ceiling, then choose a gray fan because this will coordinate with your color scheme while also standing out against the white ceiling. 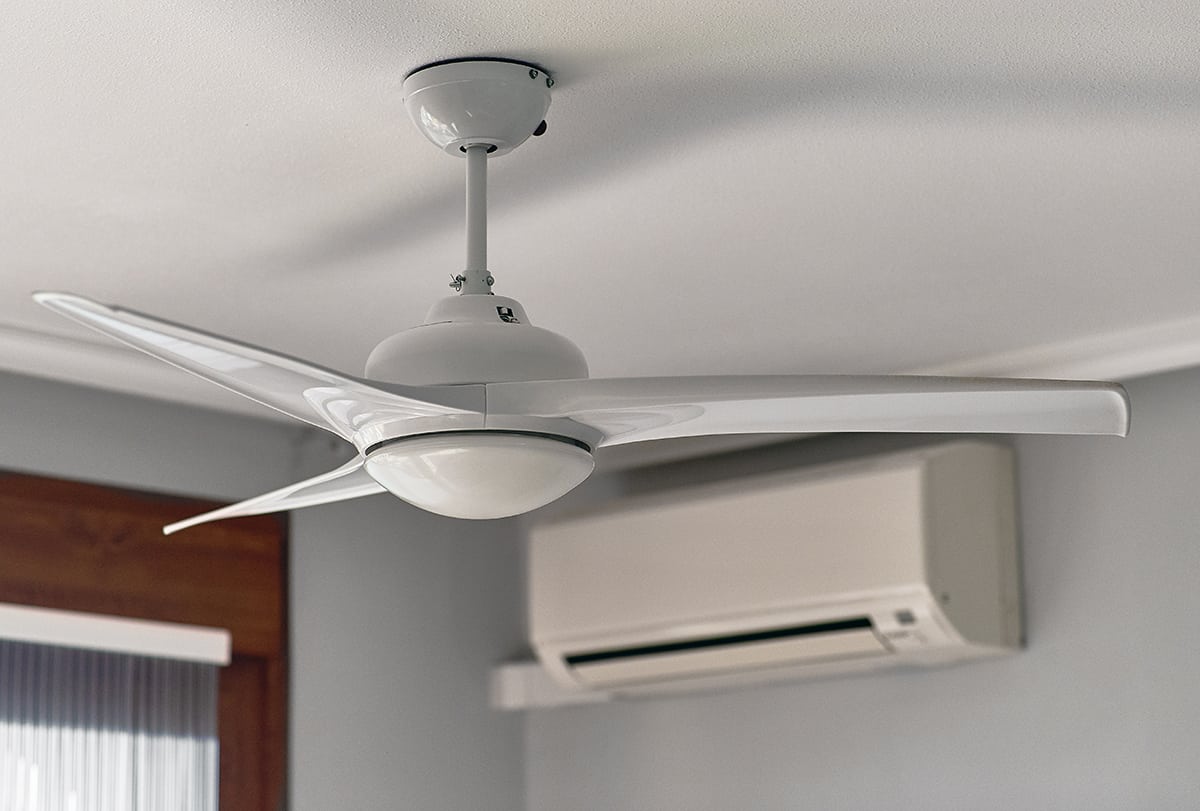 The majority of ceiling fans are white. This is the traditional color of ceiling fans, and most people think of it as being old-fashioned. While many ceiling fans that are white do have a dated look, if you want a modern ceiling fan in white, you should be able to find one easily.

Many minimalist style white ceiling fans exist, which have more angular paddles to give a contemporary look, and light shades that have an industrial look. White ceiling fans do tend to be among the most cost-effective to buy, so if you’re hunting for a ceiling fan on a budget, then this is the color to go for. 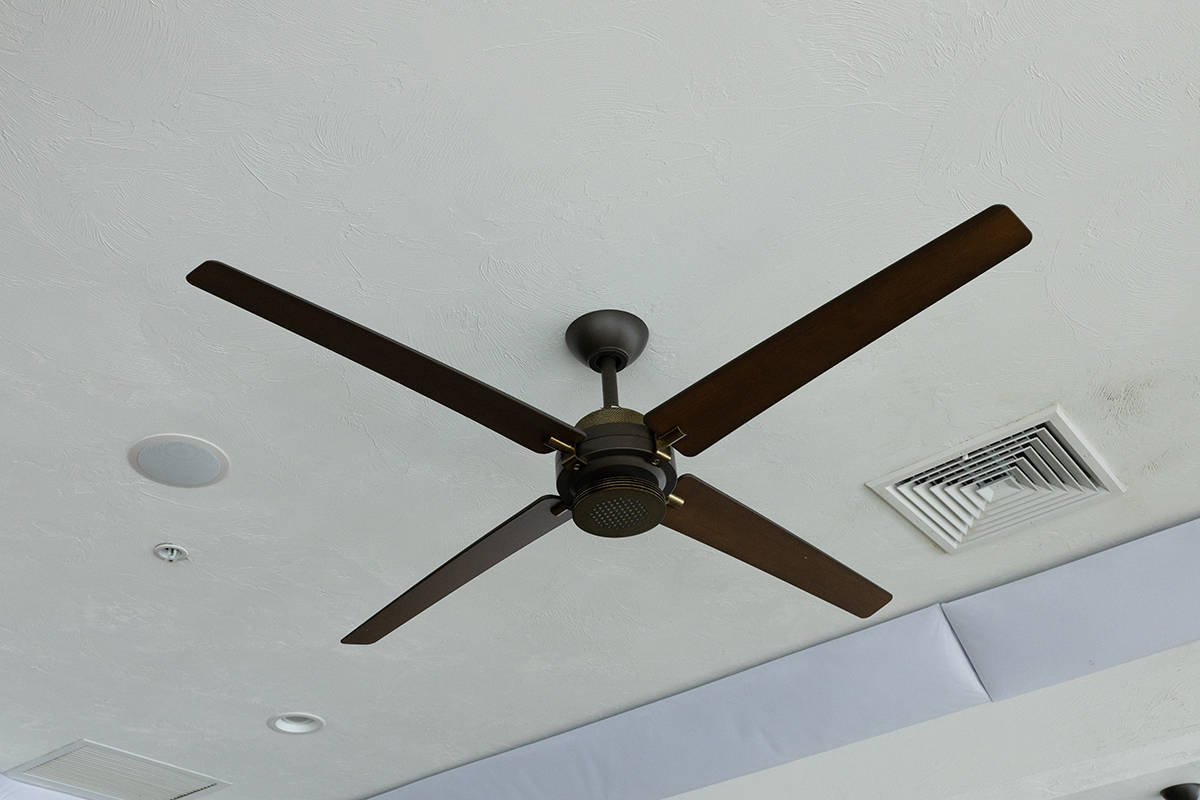 Black ceiling fans are also a popular choice due to the fact that they are a neutral color which will work with a lot of different interior color schemes. If you have black furniture or black accents in a room, then a black ceiling fan can help to tie all those items together and create a cohesive feel. 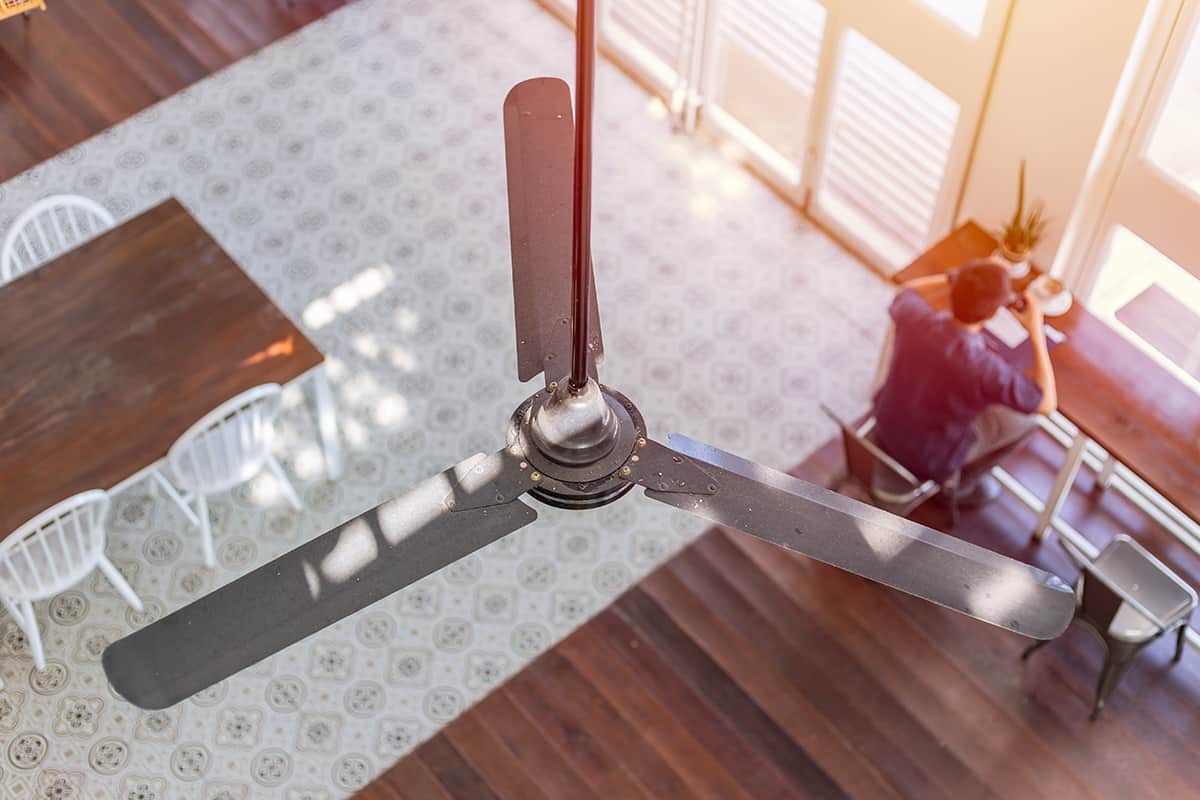 If you have a white ceiling and you want a type of ceiling fan that will stand out without making too much of a bold statement, then gray is a good option. As a neutral color, gray will contrast white in a more subtle way compared to black.

There is a range of gray shades you could choose from, such as pale gray for a casual and airy feel or medium to dark gray for a more dramatic effect. Gray ceiling fans are a good choice for an industrial-style interior decor, whether they are painted gray or have a gray metal finish. 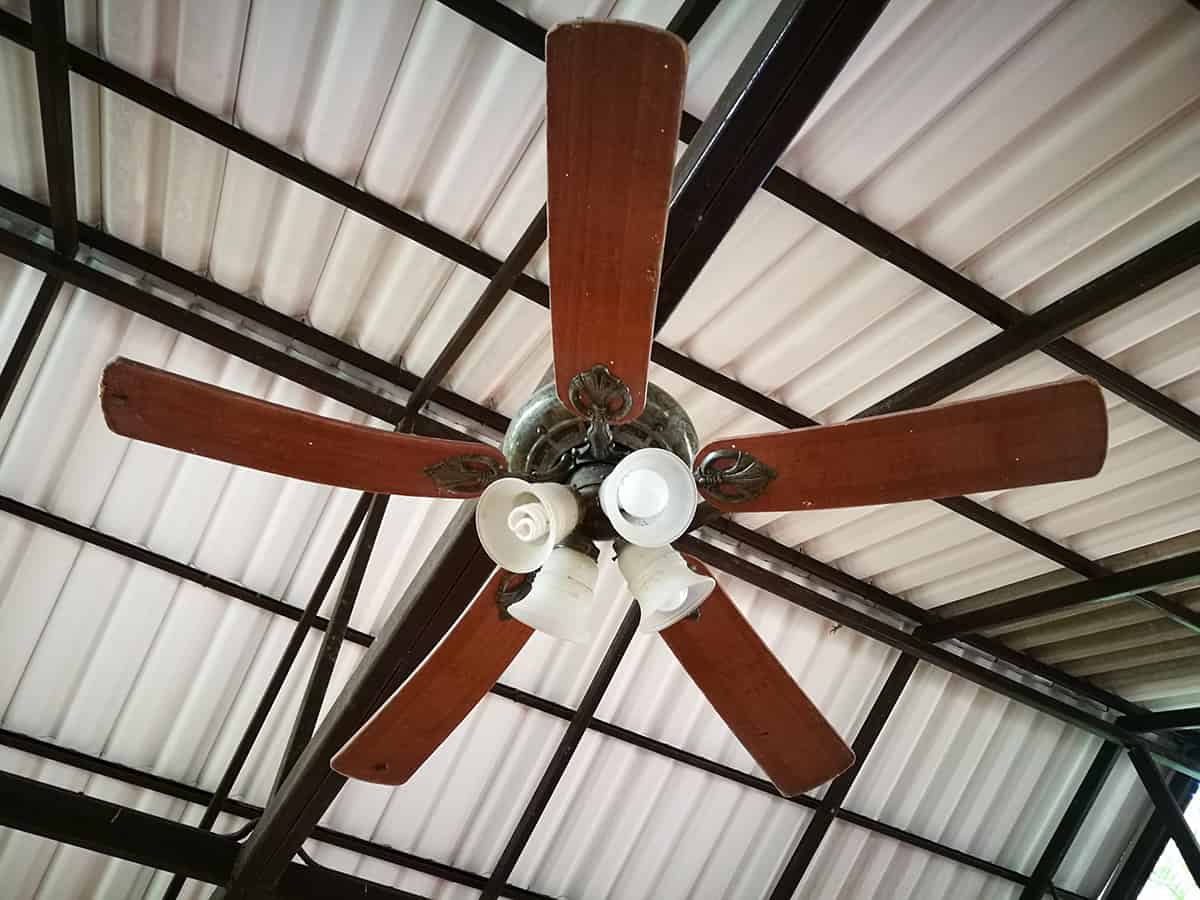 Red is a less common color for ceiling fans, but it can be a great choice if you want to achieve a retro vibe in a kitchen or dining room. Glossy red ceiling fans will stand out against neutral ceilings and add a splash of personality to a space. Coordinate your red ceiling fan with other red accessories to define the room’s color scheme. 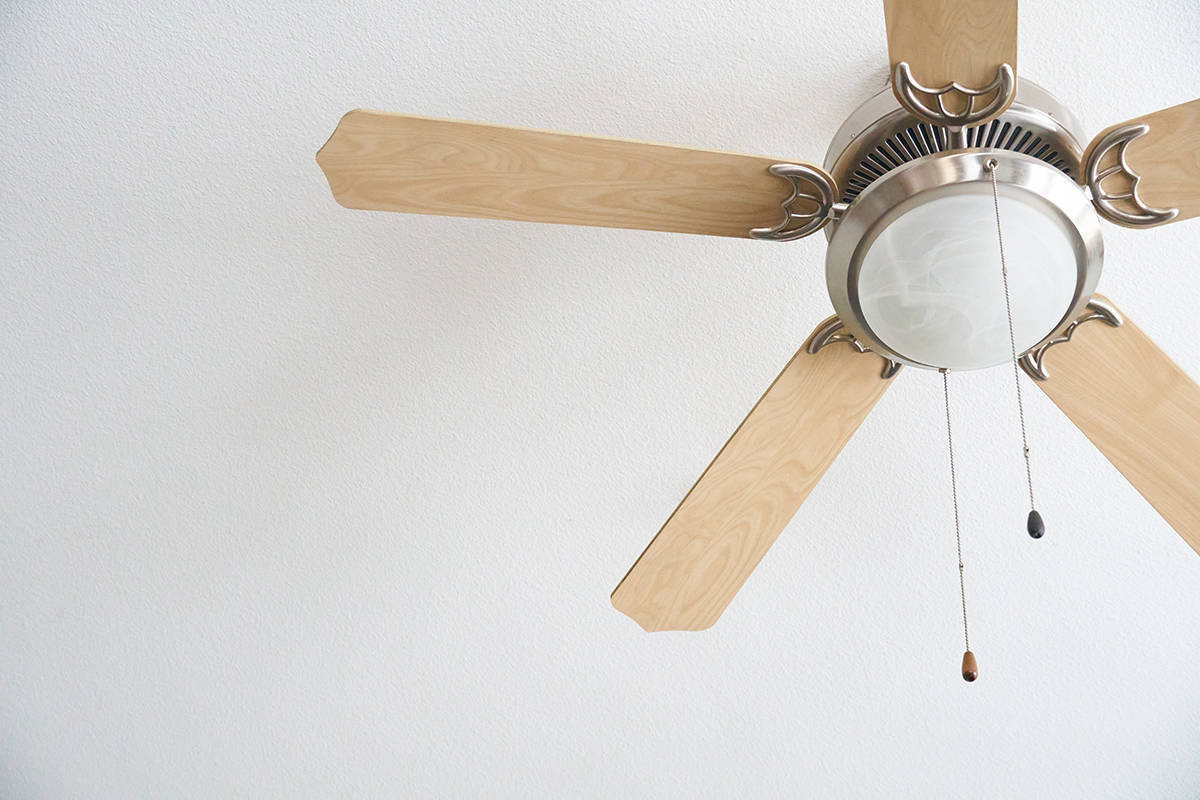 If you have a brown or beige color scheme in a room, then choose a beige ceiling fan to ensure a feeling of cohesion and also to prevent the ceiling fan from standing out. 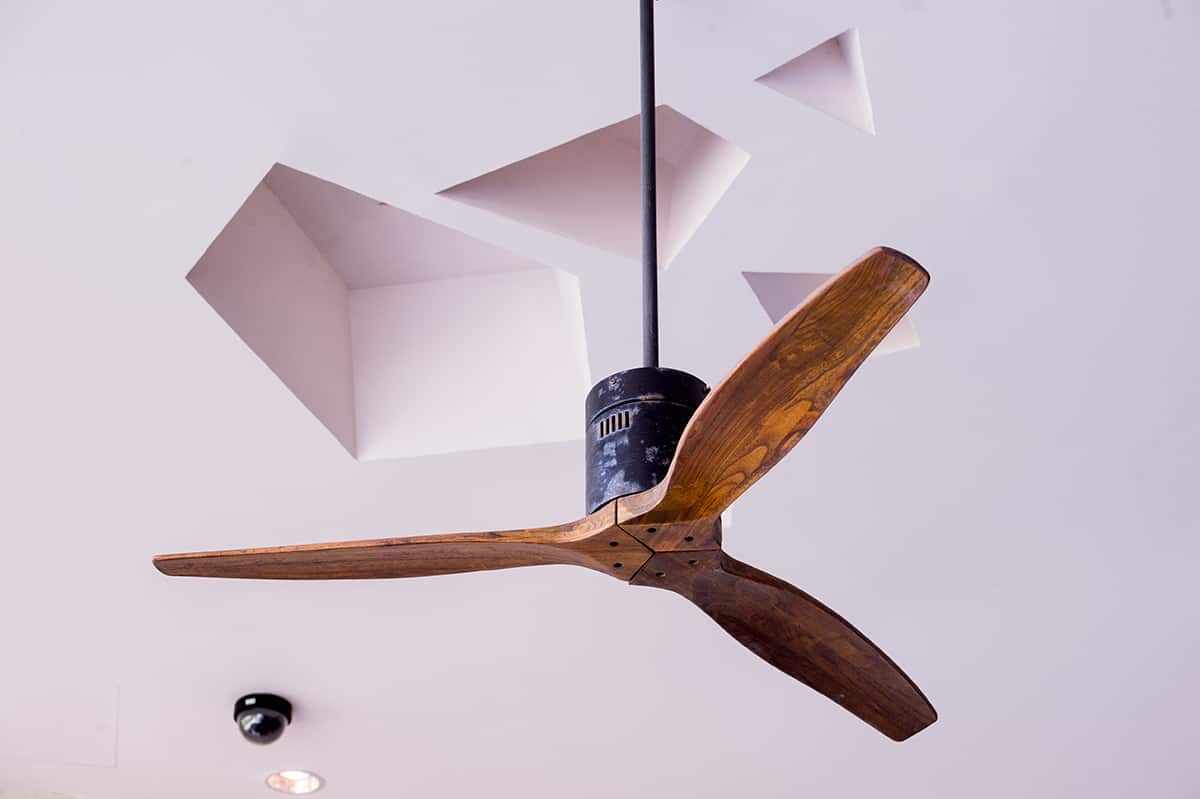