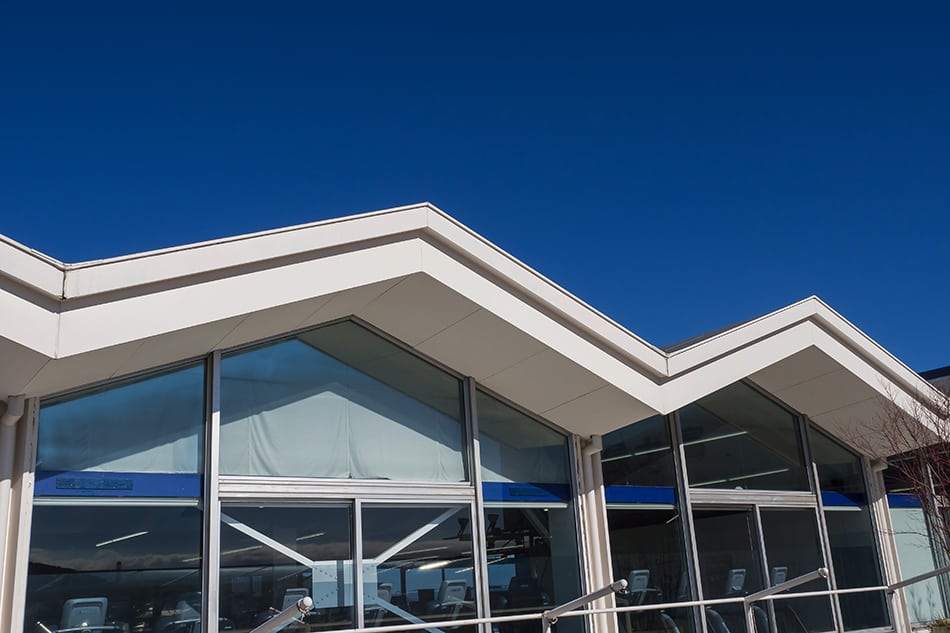 As saving energy and natural light become increasingly important for households, it is no wonder sawtooth roofs have re-emerged recently. Thanks to these roofs’ sustainable design and their vernacular style, they are seen across industrial buildings, residential properties, and commercial buildings.

Sawtooth roofs have a distinct exterior with many advantages. They help bring daylight into the interiors, thus saving energy. In the past, these roof designs were only seen in factories. However, they are now gaining popularity in modern home design.

If you are interested in building a sawtooth roof for your home or outbuilding, we have all the important details about its advantages, drawbacks, how to construct this type of roof as well as some of the finest examples of roof design from around the world.

What is the Sawtooth Roof?

Just as the name implies, sawtooth roofs consist of a series of ridges with dual pitches on each side. These roofs have multiple parallel roofs that look just like a saw’s teeth, with one slope being steeper than the other one. The steeper surfaces of these roofs tend to feature windows for maximum natural light.

Sawtooth roofs are commonly seen in large industrial buildings like factories and some even resemble a series of skillion roofs.

The main reason behind constructing these roofs is to increase the amount of natural light entering the room while minimizing glare and preventing excess heat. As the world migrated toward energy-saving construction materials, sawtooth roofs began gaining popularity.

This roofing style continues to go through improvements and innovations to make it adapt to offices and homes. In fact, you’re likely to see high-tech radiation barriers incorporated into sawtooth roofs in order to improve their cooling efficiency. 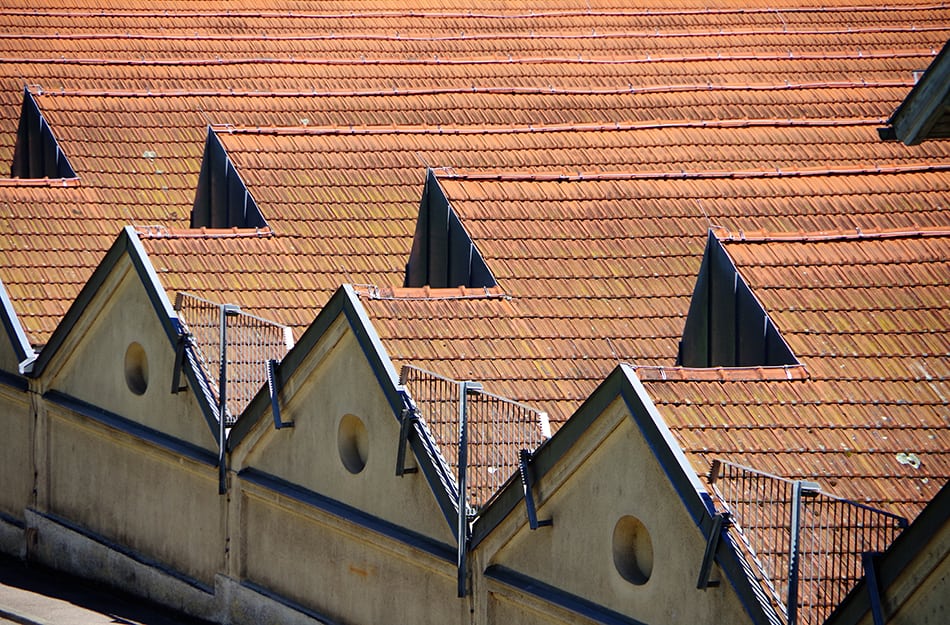 The British architect and engineer William Fairbairn is often credited with the original sawtooth roof design in 1827. But it wasn’t until the 20th century that sawtooth roofs gained popularity as they were mainly adapted for power-weaving purposes.

These roofs were welcomed for factories during the industrial revolution as they helped bring natural lighting into the manufacturing process. Since the prevalent use of artificial lighting, however, sawtooth roofs gradually lost their appeal.

The design of these roofs re-emerged in the late 20th century when commercial buildings emphasized the use of natural light for environmental efficiency. This is when these roofs became desirable again.

Sawtooth roofs look best when built in a series of three. Although they once only appeared in mills and factories, due to their eco-friendly benefits they became a popular choice for residential homes.

Now that you have a better idea of sawtooth roofs’ origin and what they look like, let’s delve into their main advantages and disadvantages.

Sawtooth roofs always feature glass panels that provide maximum natural light to enter the interior. These glazed panels also block the harmful UV rays of the sun, which is why these roofs were so suited for factories.

This type of roof has high ceilings that add extra space to the building. This is one of the biggest advantages of sawtooth roofs as large buildings require a lot of space.

If built properly, a sawtooth roof helps you save money on your heating and cooling as it keeps your home warm in winter and cooler in summer.

By opting for sawtooth roofs, you can easily install solar panels and benefit from their energy-saving properties. Sawtooth roofs are an environmentally friendly solution that can save homeowners money on electricity costs.

With their edgy and unique appeal, these roofs are ideal for contemporary, open-plan homes.

Due to their complex design that consists of more materials, sawtooth roofs cost more than other types of roofs to build. In addition to more materials, you will also need to hire an architect to plan such a roof design for you, which will add to the costs.

Not suitable for heavy rain or snowfall areas

Since sawtooth roofs feature lots of valleys, slopes, and windows, they are more likely to leak after heavy rain or snowfall. You should, therefore, only consider this type of roof if you live in a relatively dry region.

These types of roofs are prone to rusting because of the trapped water. Although most consist of metal sheets, it is the actual design of the roof that makes it susceptible to leaks. As a result, expect to replace or repair the roofing materials more often. To overcome this problem, consider using high-quality roofing materials that can withstand adverse weather.

How to Build a Sawtooth Roof

Sawtooth roofs are typically made from high-strength wood, metal and concrete materials. When constructing this type of roof, you must take into account the symmetry and uniformity of these roofs.

The beams, for example, are longer than any other conventional roof. The roof’s dead load is also bigger than the live weight. Therefore, you must pay particular attention to the structural reinforcement of these roofs during construction.

Most builders use steel reinforcement for additional support. They usually add a series of metal trusses for extra support at the hinged parts of the roof.

The building process of this type of roof involves a series of valleys and ridges. The materials are typically metal or slate as durable and hard-wearing options instead of asphalt shingles, which can jeopardize the building’s structural integrity.

The creation of each roof section happens in parts, with each section requiring proper inclining of about 15 degrees. The transparent sections, on the other hand, require 60 degree inclination.

The other important consideration is the gutters of sawtooth roofs. When choosing gutters, make sure they are strong enough to hold a large volume of water during heavy rainfall. If you want to install box gutters, they will require routine maintenance to prevent sagging and leaking. The drains of box gutters are susceptible to accumulating dirt and leaves, which cause blockage within the gutters.

Another consideration with sawtooth roofs is the amount of space you require underneath them. Sloped roofs and skylights may work but only if your interior space is an open concept. Just imagine the view through the glass!

Lastly, how much snow your sawtooth roof is likely to accumulate should be your main concern as this can lead to possible leaks or mold growth around the windows. One solution is to pitch the roof toward the window as well as use heating coils at the roof’s lower point.

They may even increase maintenance costs. Slate shingles, on the other hand, will cost more but are much more durable and long-wearing. You may even consider metal shingles due to their ability to withstand extreme temperatures. All in all, the final cost of building a sawtooth roof depends on whether you hire builders for this job as well as the type of materials you use.

How Long Do Sawtooth Roofs Last?

The lifespan of sawtooth roofs largely depends on the materials used. You can prolong the life of your roof by using high-quality and durable materials, such as slate or fiber cement. These roofing materials can last up to 75 years, depending on the climate and construction quality.

Sawtooth roofs look beautiful with their glass panels that block the UV rays and invite natural light into the large spaces. These roofs were particularly beneficial in factories, but it wasn’t long until homeowners started realizing their energy-saving benefits.

As you already saw in our 4 examples, sawtooth roofs are mainly formed by sloping roofs and vertical glass windows, with each window displaying one tooth of the saw. The use of these roofs helps distribute light evenly while protecting from direct sun penetration thanks to their overhang.

If you have decided to build this type of roof for your home, you should consider the position of the windows in order to ensure your space gets the most amount of natural light.

For example, if your sawtooth roof is facing west, you will get direct sun exposure as well as glare and heat problems. This can be avoided by locating your sawtooth roof windows on the south side of your home. Also, consider installing double or triple-glazed windows so as to avoid heat gain in summer and heat loss in winter. 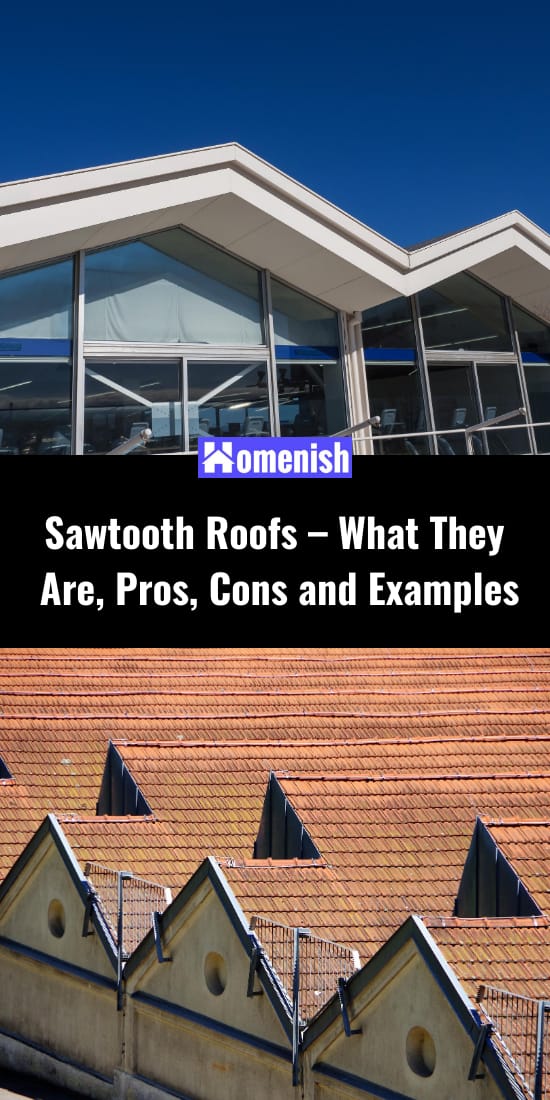