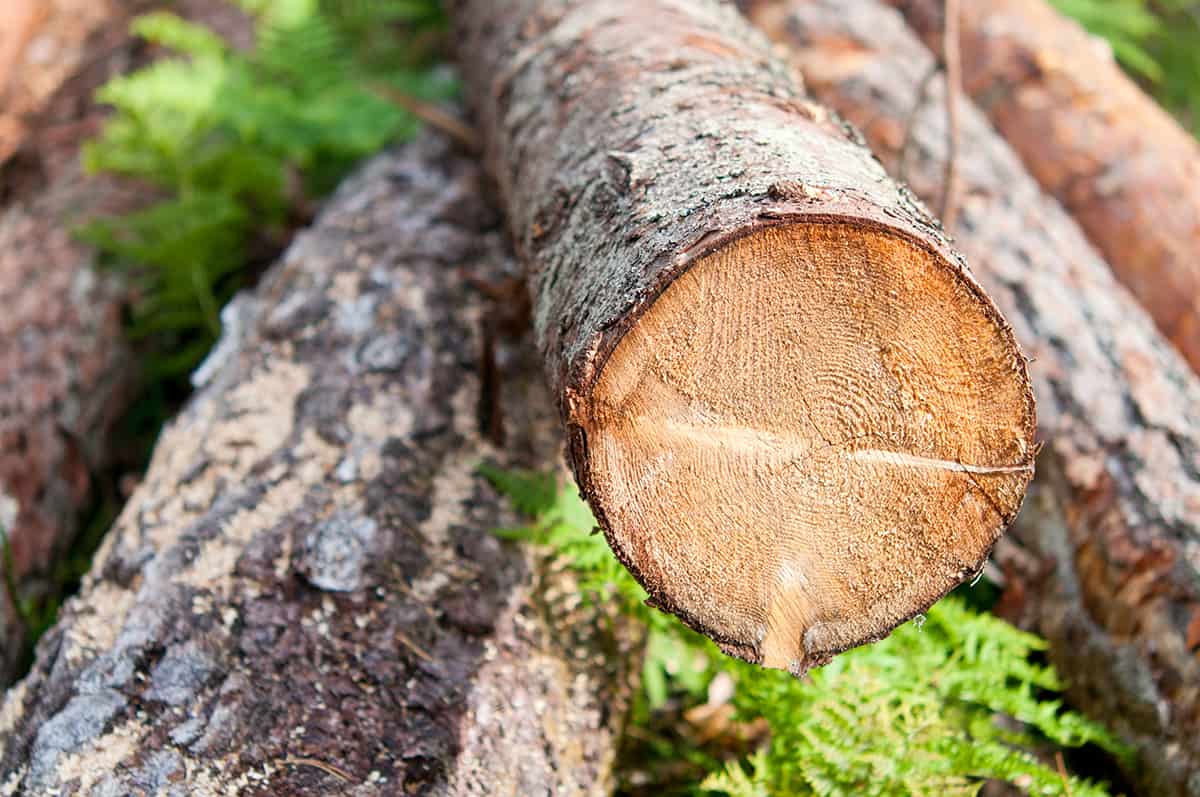 Fir trees are typically medium to large species, belonging to the genus ‘Abies,’ which translates from Latin to ‘to rise,’ indicating the majestic growth pattern of these trees. Fir trees have many uses, among which is the wood produced by their trunks.

Benefits and Uses of Fir Wood

Firwood typically has a pale creamy color which is ideal for staining or painting. If you want to keep it natural, fir wood develops to a light brown or reddish-brown color as it ages.

Firwood is not dense, which makes it easy to cut and easy to work with. However, this quality can mean that it lacks strength and is, therefore, best suited to indoor joinery work as opposed to construction.

True fir wood is not very durable, and hence it is not a very popular material for construction and is more commonly used for plywood and pulpwood. However, false fir wood, notably the wood produced from the Douglas fir tree, is very durable despite being lightweight, making it an ideal choice of timber for construction, flooring, carpentry, and many other uses.

Fir Trees and their Wood 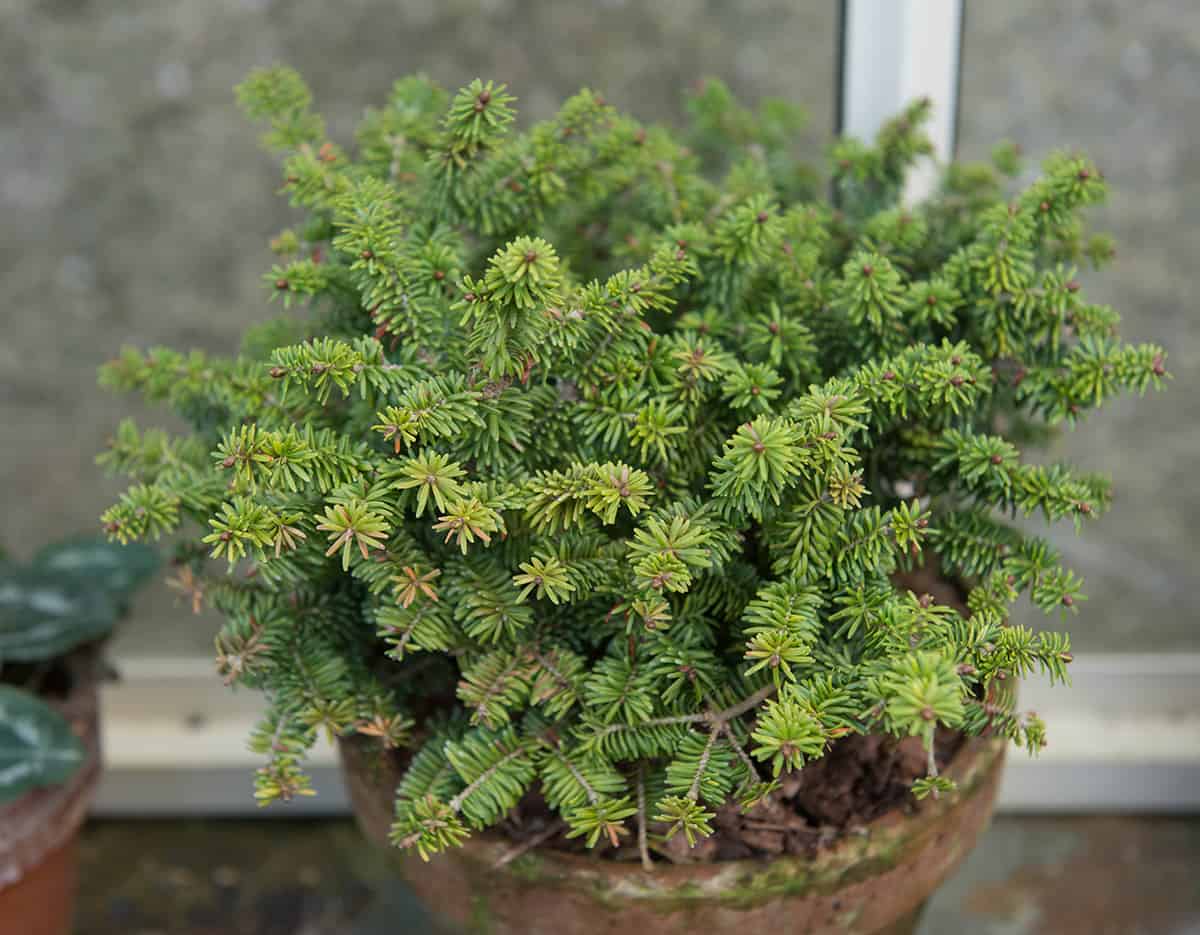 This tree is native to the northeastern United States and central and eastern Canada. It is small to medium in size, reaching eventual heights of between 40 and 60 feet. This tree is most commonly known for its use as a Christmas tree, which is the main reason it is cultivated.

Balsam fir trees have a rich and warming fragrance, and they are also able to retain their needles for a considerable amount of time after they have been cut down. Both of these qualities make them an excellent variety of Christmas tree.

The foliage on these trees takes the form of flat needles, which are dark green. Wood produced by the Balsam fir can be cream or brown in color, with a deeper shade achieved as the wood ages. The grain of the wood is impressively straight with a medium coarse texture.

Since this wood is not particularly durable or resistant to moisture and decay, it is not widely used as an outdoor construction material. It also needs to be stained or painted to be made attractive, so it is also not popularly used in furniture making. These qualities, or lack thereof, mean that Balsam fir wood is predominantly used for indoor lumber or pulpwood. 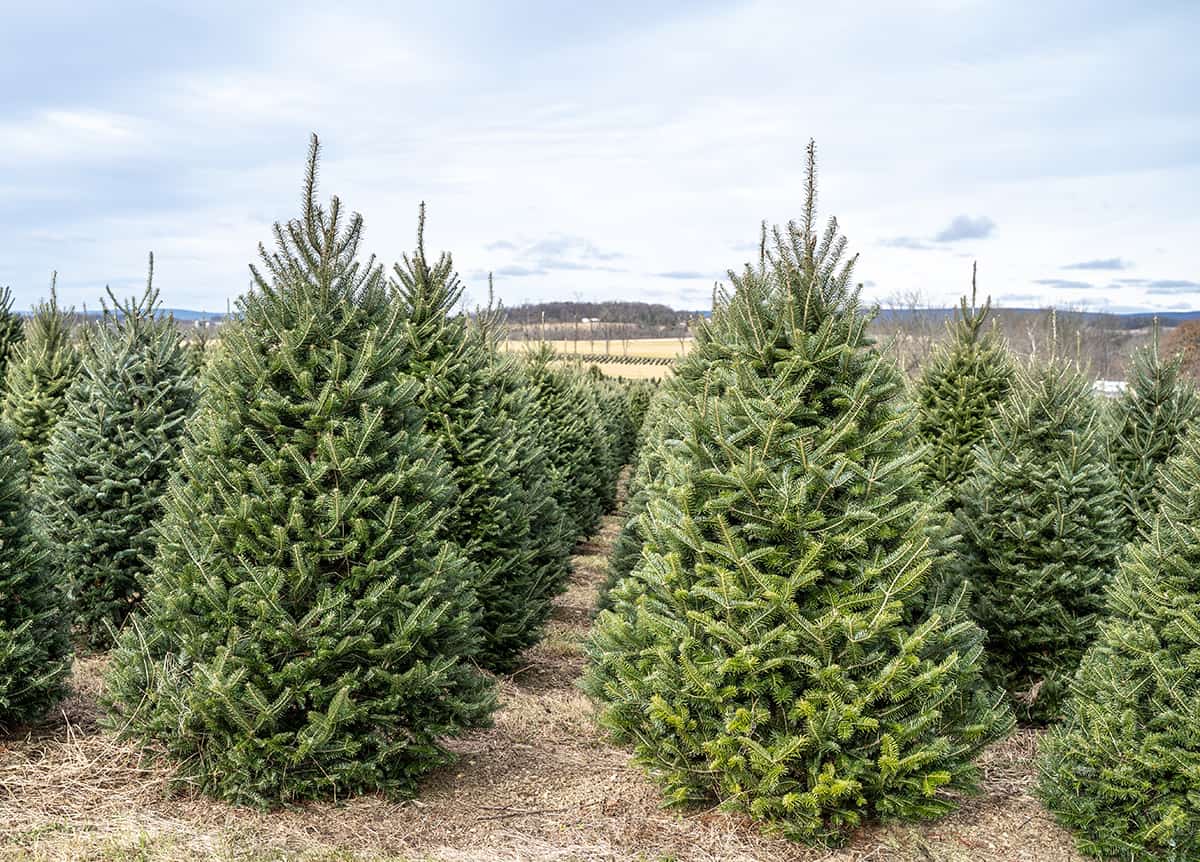 The Fraser fir is a close relative of the Balsam fir and, as such, retains many of the same qualities. It is native to the southeastern United States, most notably the Appalachian Mountains. The Fraser fir is small to medium in size, reaching a mature height of between 30 and 50 feet. The foliage of the tree is needle-like, flat, and flexible.

Like the Balsam tree, the Fraser tree is a softwood that is not very durable and offers very little resistance against moisture and decay. As such, it is not known for its use as timber and instead is favored for use as Christmas trees. The Fraser fir tree has famously been chosen by the White House as their Christmas tree for many years. 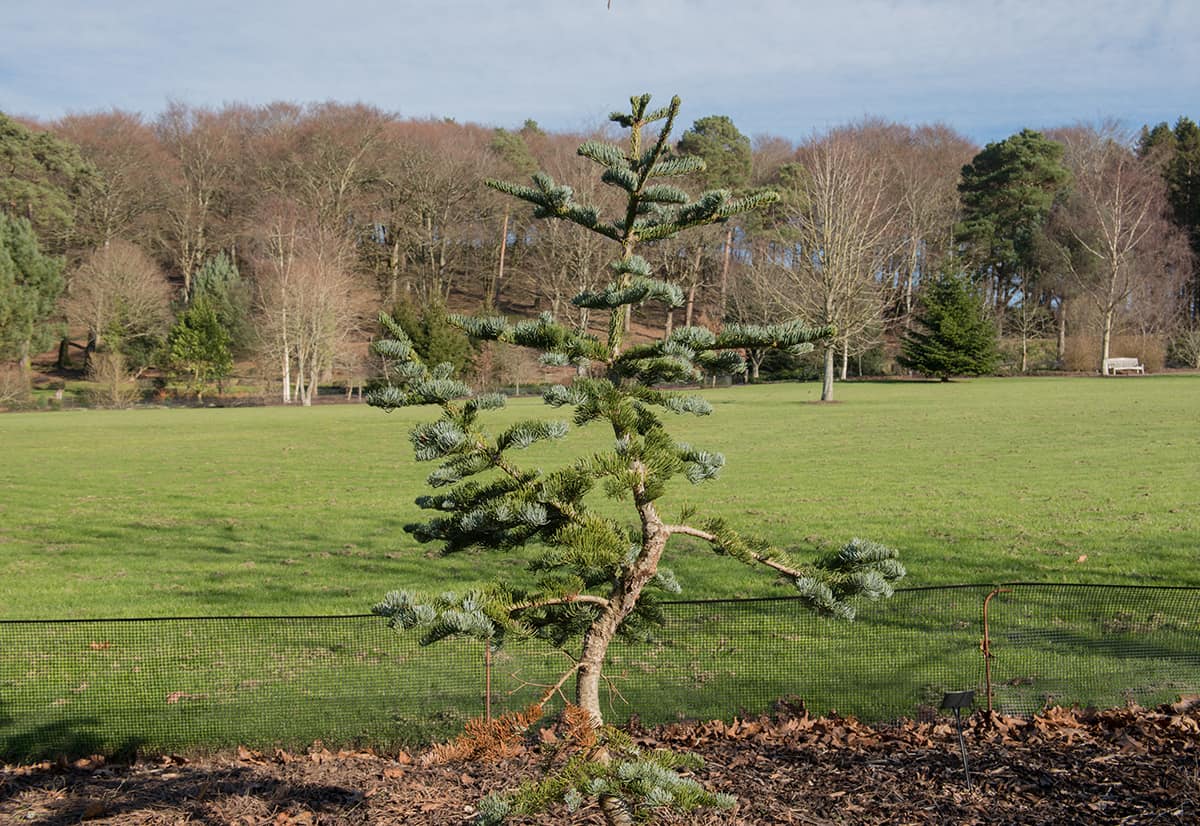 This evergreen fir tree is grown natively in the mountain regions of Oregan of California. It is a large tree, reaching heights of between 100 and 150 feet. The tree is named after its bark, which is gray when young, but as the tree matures, the bark develops to a deep red-orange color.

The wood of this tree is pale in color, and it lacks durability. It has a coarse texture and a straight grain. It is predominantly used for interior joinery and in construction. 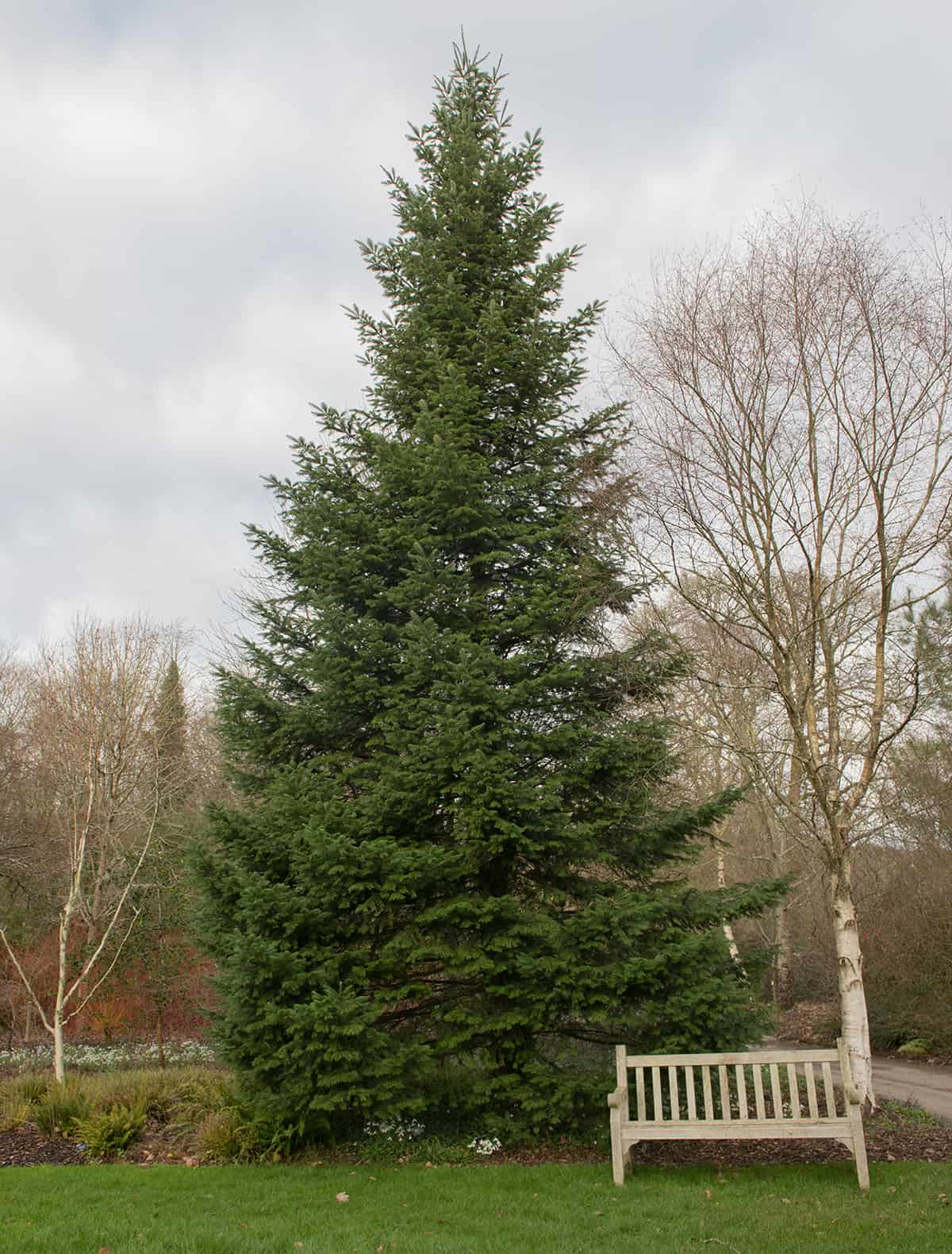 This is a large coniferous evergreen tree that reaches heights of between 100 and 120 feet when mature. It grows natively in the Pacific Northwest of North America, with shiny dark green needles that are flat and flexible.

The cones of this tree are notable because they stand erect and are quite sizable. When the cones rupture, they release winged seeds, which can be developed into new Grand fir trees. The wood that comes from the trunk of these trees has a creamy color that darkens to a reddish-brown as it ages.

It is a softwood with a straight grain and medium to coarse texture. It is easy to work with, but its lack of durability and resistance to decay means it isn’t widely used as lumber unless it has been pressure treated. It is more commonly used as pulpwood and plywood. 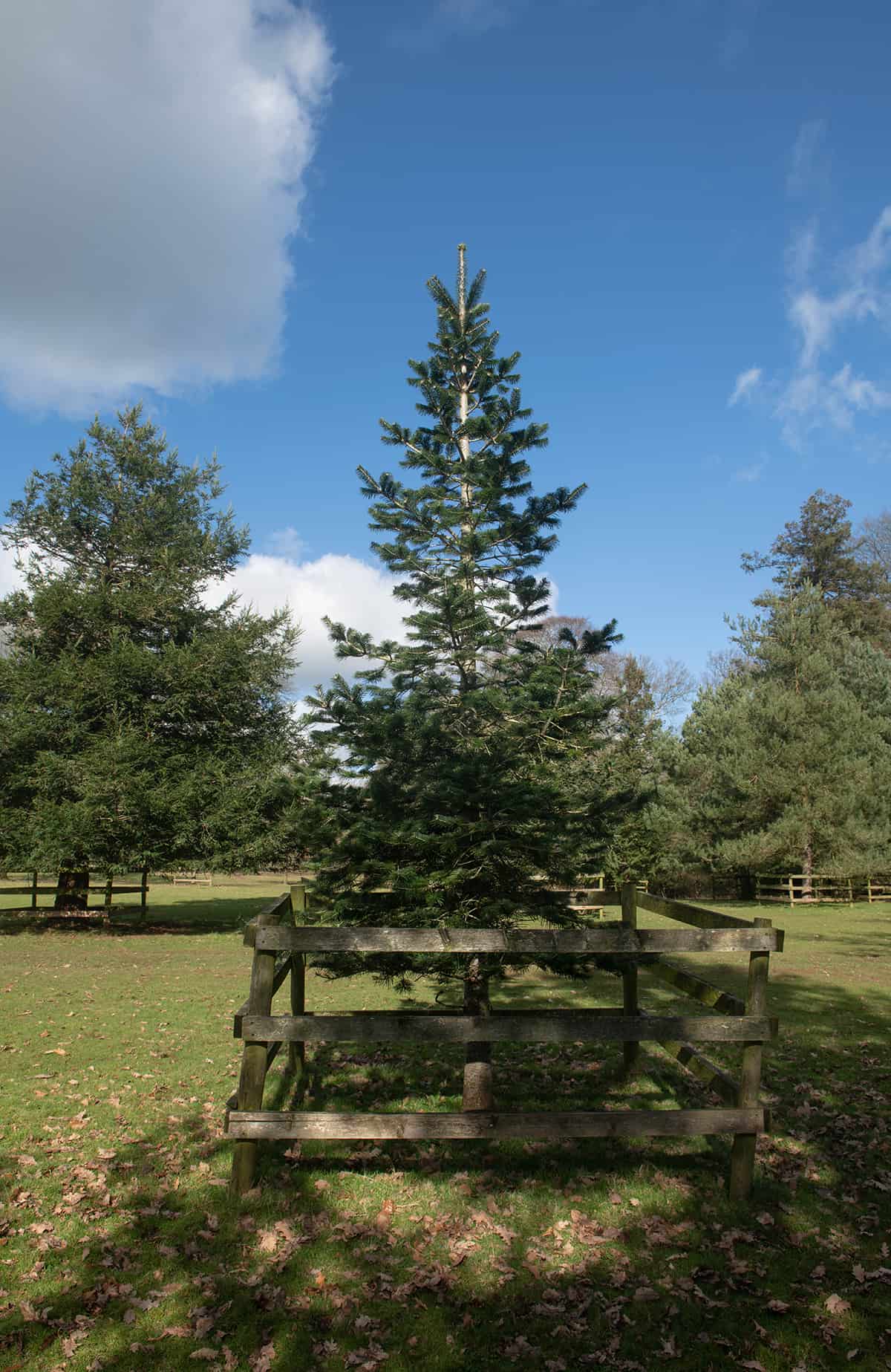 As the name of this tree suggests, it is native to the Western Himalayas. It is a large coniferous evergreen that reaches heights of between 100 and 200 feet when mature. The foliage of the tree is needle-like and flat, with a glossy green surface and a white and green underside. The cones of the tree have a broad cylindrical shape and are a pretty shade of purple when young.

Himalayan fir wood has a similar quality to both Fraser fir and Balsam fir. It is neither very strong nor durable, and it has a light creamy color. Though this type of wood is rarely exported from its native growing region, it is an important wood in the local area. It is predominantly used locally for interior construction, such as framing and hardwood flooring. 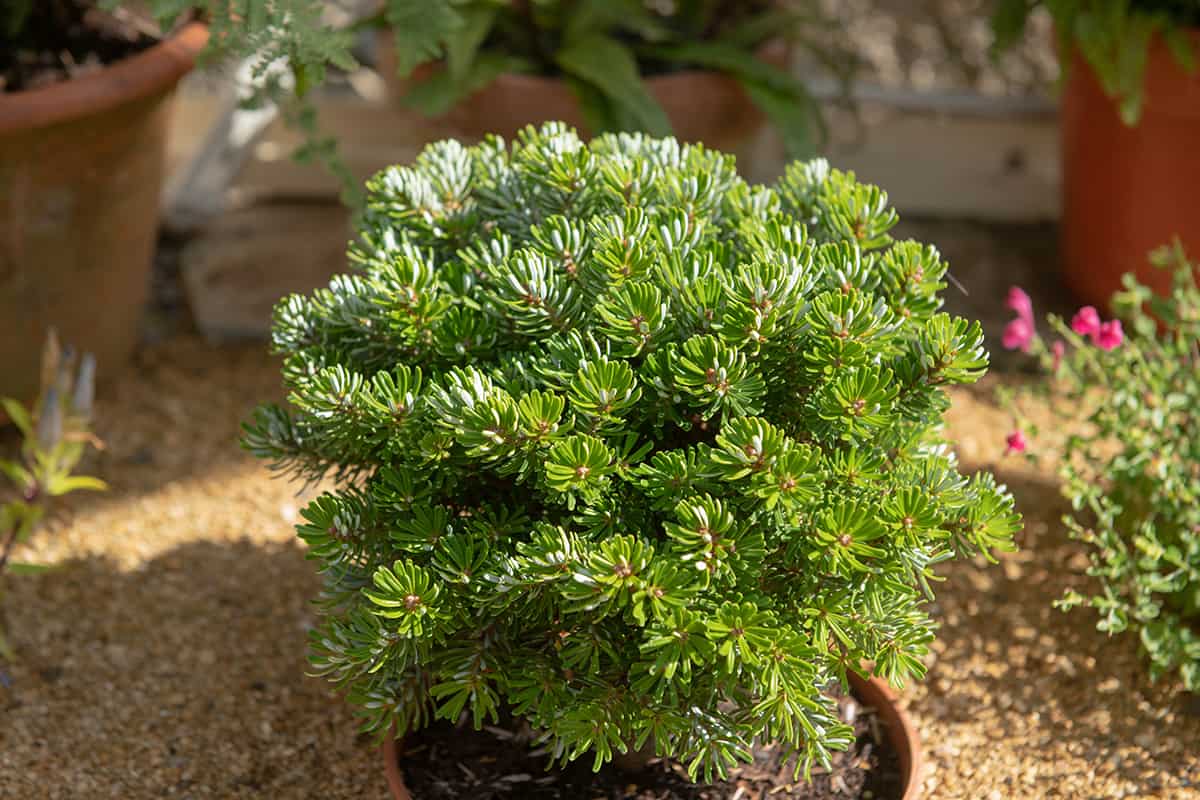 The Korean fir tree is native to South Korea. It is medium in size, growing to ultimate heights of between 40 and 80 feet. This evergreen tree has needle-like leaves that are dark green and glossy and bark which is dark brown and smooth with blisters. The cones of this tree are perhaps the most visually interesting thing about it.

They appear at first in a shocking blue-purple color before maturing to a dark brown shade. The Korean fir tree is not cultivated for its wood since it is weak and therefore not well suited to construction. It makes a nice ornamental specimen and works well for use as a screen from wind or to create shade in a garden. 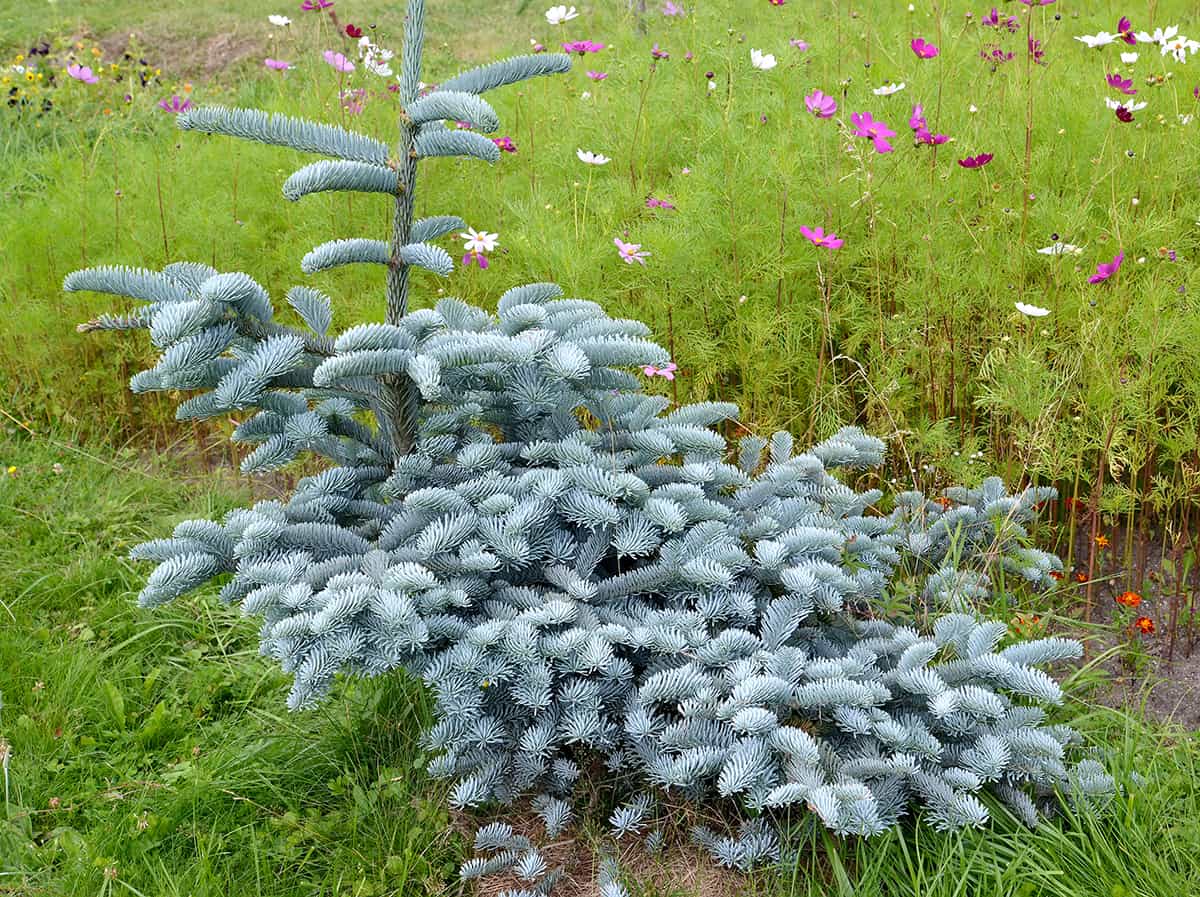 This evergreen tree is native to the Pacific Northwest of the US, where it reaches heights of between 100 and 200 feet. The foliage of this tree is needle-like and green, arranged in spirals like most fir trees.

The Noble fir tree does not produce outstanding wood. Instead, it lacks durability and is not resistant to pests or moisture. It is predominantly utilized for pulpwood and plywood and is also used in construction as raw lumber. The wood from this tree is a creamy shade, which darkens to a more red tone as it ages. 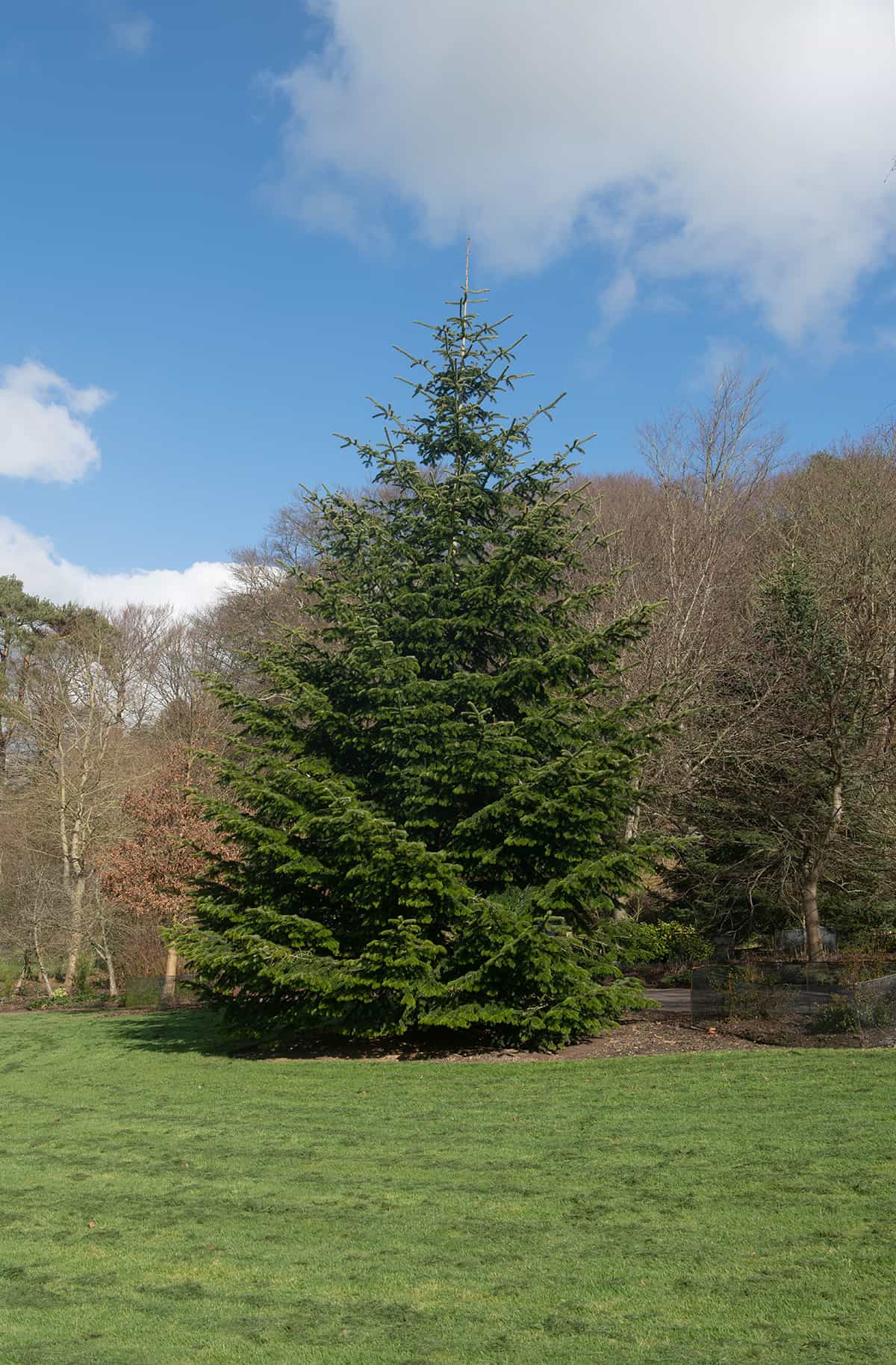 Nordmann fir trees are native to Eastern Asia and Western Europe. They are medium to large in size, reaching heights of between 50 and 150 feet. The foliage on the Nordmann fir is needle-like and flat, with a glossy green surface and a blue-green underside.

Nordmann fir is utilized locally as a construction lumber, but it is not exported for this purpose since it lacks durability and other desirable qualities for wood. Instead, the Nordmann fir is predominantly cultivated on Christmas tree farms for its festive decorative uses. 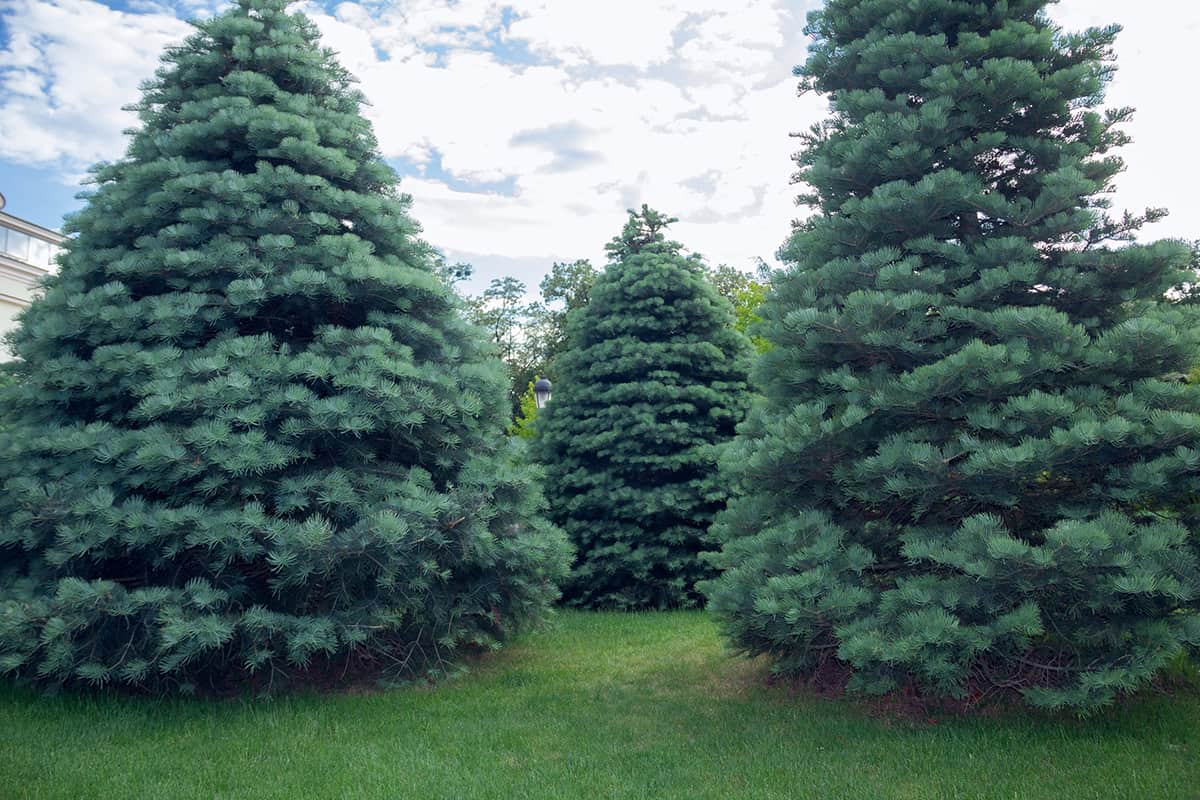 This evergreen tree is native to central and southern Europe. It typically grows to heights of between 100 and 150 feet. When young, the tree has a pyramid shape, but the crown flattens out as it matures. The Silver fir is aptly named for its bark which is silver-gray in color.

The foliage of the tree is dark green and glossy, and it produces interesting cones, which can be blue, red, or green. The wood of this tree is more durable than most other types of fir tree, and it also has a pale color with an even texture; as a result, it is commonly used in construction or as plywood. It has long fibers, which make it ideal for use in producing paper. 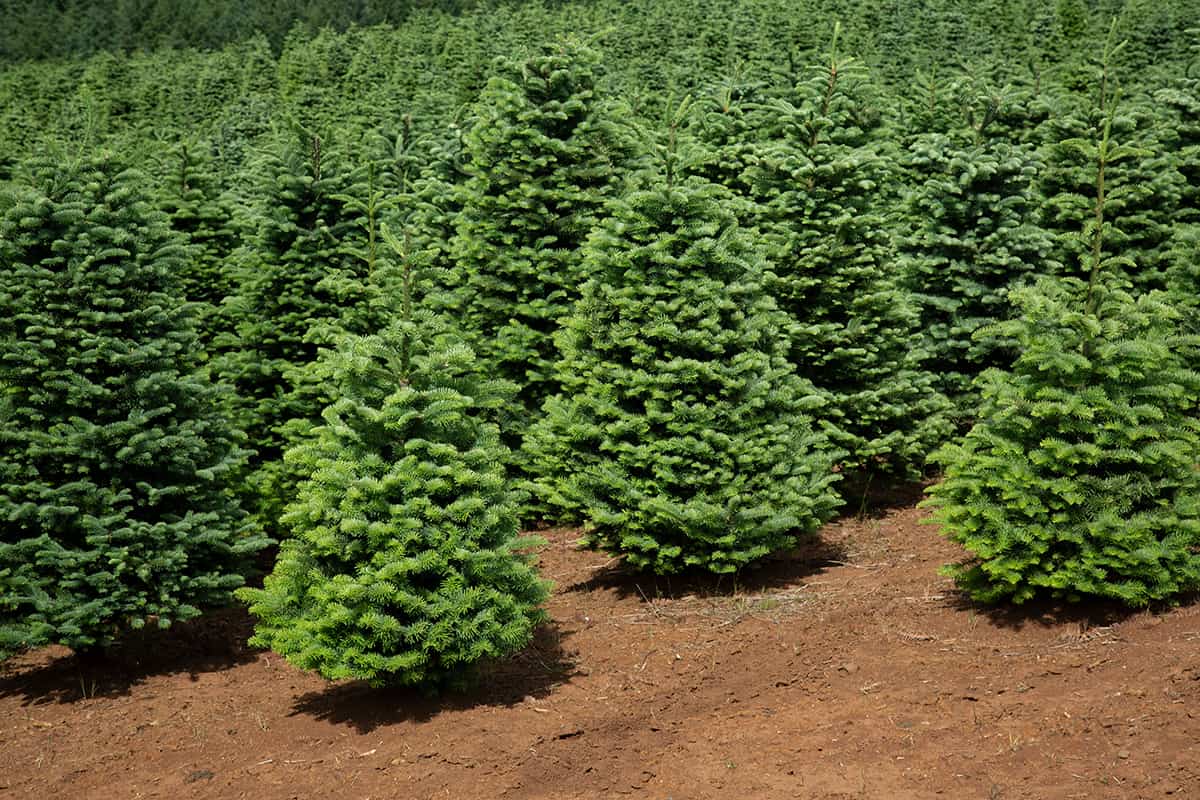 The Douglas fir is not a true fir tree, and its genus name of ‘Pseudotsuga’ actually translates to ‘false Hemlock.’ It is native to western North America and can reach phenomenal heights of over 300 feet. Despite being a softwood, the timber produced by this tree is one of the most commercially important timbers in the world.

The Douglas fir produces more timber each year than any other type of tree in North America. It is valued for its strength and durability, as well as its natural resistance to decay and its pale cream color that deepens to a light red-brown as it ages.

Douglas fir timber is used for many applications, including construction, framing, flooring, and ship-building. The tree has also been popularly used as a Christmas tree.