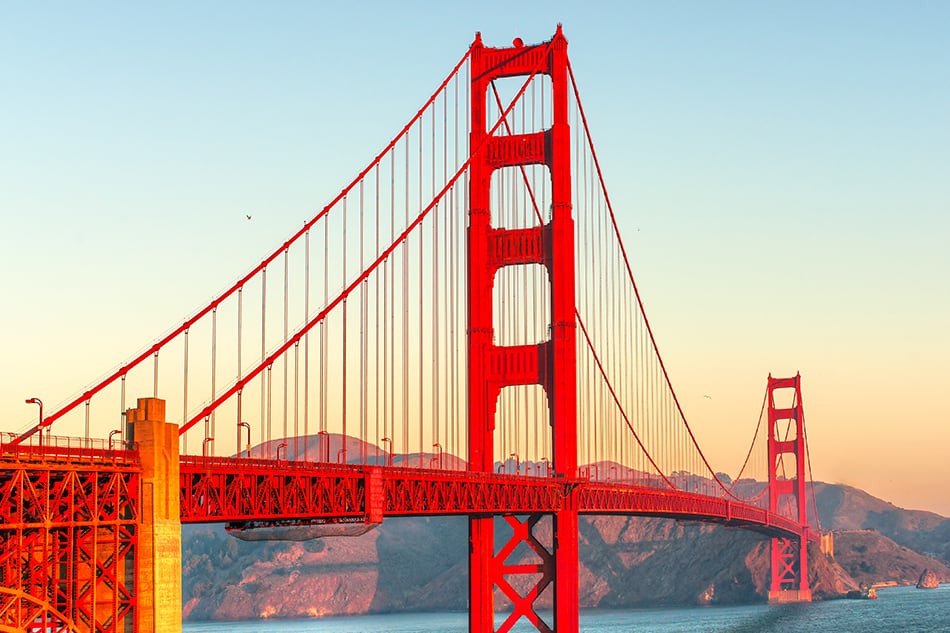 Bridges are sturdy connecting structures that are built over obstacles to provide passage for humans, animals, and all kinds of vehicles. They are typically built over rivers, lakes, or gorges.

Bridges are most often seen running across roads, pipelines, railways, canals, etc. Several kinds of bridges exist, and they serve different purposes. Some bridges may also be built to serve specific purposes. The most interesting factor to consider when looking at the different bridges is their components. There are many types of bridges with different styles and designs but they are all composed of some major bridge parts.

In this article, we’ll explore different types of bridges – how they are constructed and the pros/cons of each.

How Do Bridges Work?

Another component of a bridge is the bearing. This component usually offers a resting surface in-between the deck of the bridge and its pier. The bearing also serves the significant function of allowing controlled movements on the bridge and, in the process, significantly reducing the stress that comes from the weight on the bridge. The bearing also carries the load from the deck and distributes it so uniformly on the substructure.

A bridge must be resistant to movement to provide a stable surface for all kinds of load. This means one needs top of the line engineering to figure out the perfect balance needed to keep a bridge stable 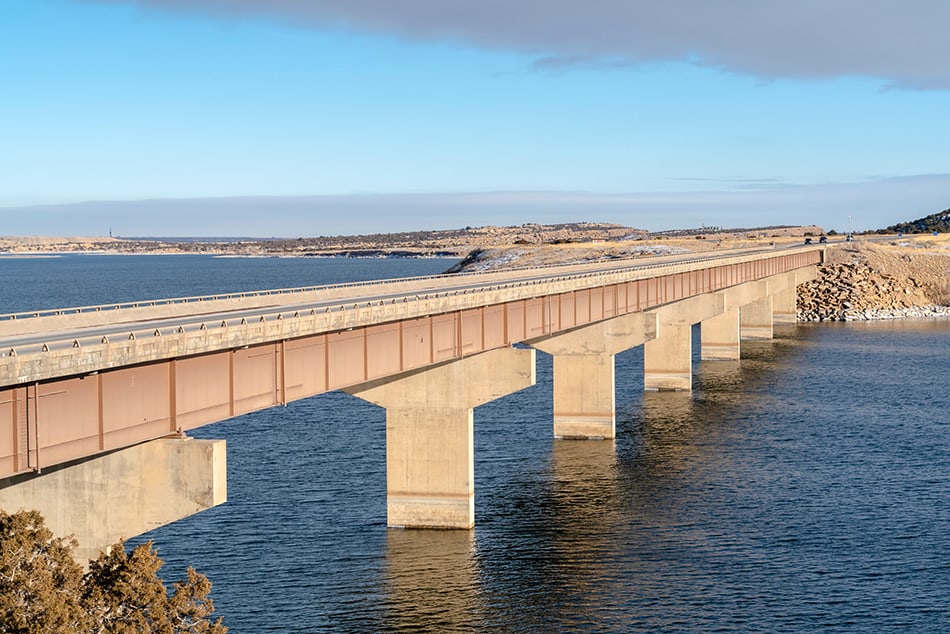 This type of bridge is considered one of the most basic. It is the bridge that you picture when someone mentions a bridge. The beam bridge consists of some vertical piers and horizontal beams. This kind of bridge is usually spanned with either two or even more spans that are also held firmly by abutment or piers at every end. Beam bridges are usually constructed using steel, wood, or RCC. Beam bridges also have a span of about 80 meters.

The strength and weight of a beam bridge are determined by its height, length, and width. However, the strength of the beam bridge is most accurately determined by the space between its piers. Consequently, beam bridges are not suitable to be used as very long bridges unless you plan to connect many of these bridges.

The span of a beam bridge relies on the weight of the beam and the fabric’s strength. As the material of the bridge gets thicker, its capacity to bear heavy loads will be boosted, thereby also increasing the bridge’s lifespan. On the other hand, a sturdy beam may start to sag after a while.

Beam bridges have a top edge that is stronger because loads are usually applied in the underside of the beam that is stretched and always under tension. Beam bridges are also sometimes called stringer bridges or girders bridges

A beam bridge has advantages such as:

This type of bridge also has disadvantages such as: 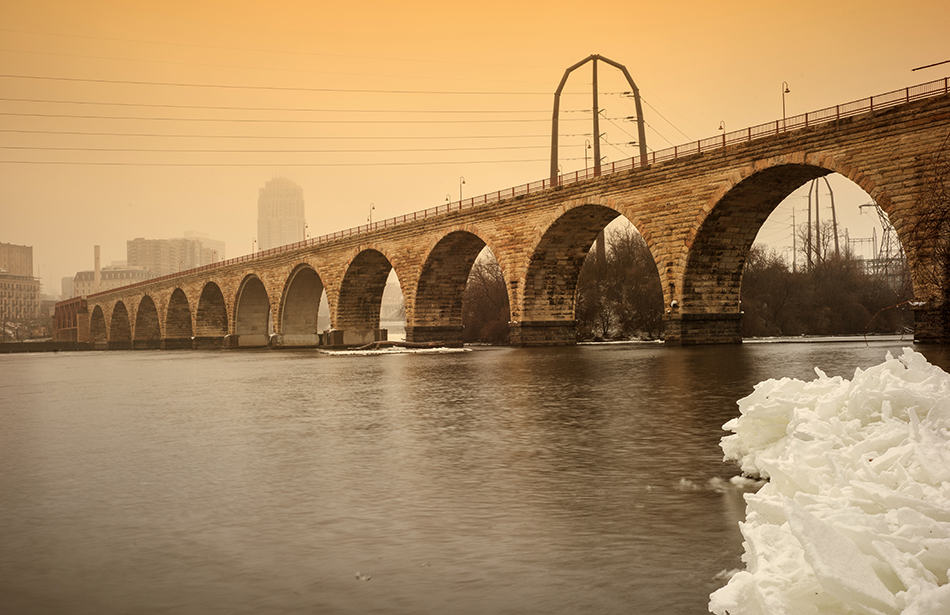 This type of bridge is one of the trendiest ones since it was widely used by the ancient Romans. Arch bridges are usually made of stones, concrete, or even steel. Just like the name implies, these bridges are usually shaped like an arch. This kind of bridge is a curved bridge in which the loads on the curves are not applied directly to the downside of the bridge; instead, loads are usually borne across the arch’s curve. The supports on this bridge are called abutments. The abutments usually bear loads of the whole bridge, and they are in charge of keeping the arch strongly in its preferred position.

Fixed arch bridges could be made unstable by fluctuations in temperature. The arch design could be altered a little by adding hinges at the bases and also at the span’s center. This aids the arch to last longer.

The number of the arch or curves in the bridge is determined by the stress and the loads that the bridge is supposed to support. The arch bridge has a span length that usually runs up to 250 meters, and the deck of the bridges usually rests on the structure of the arch.

The arch bridge has a couple of advantages such as:

This type of bridge also has its disadvantages, and they include: 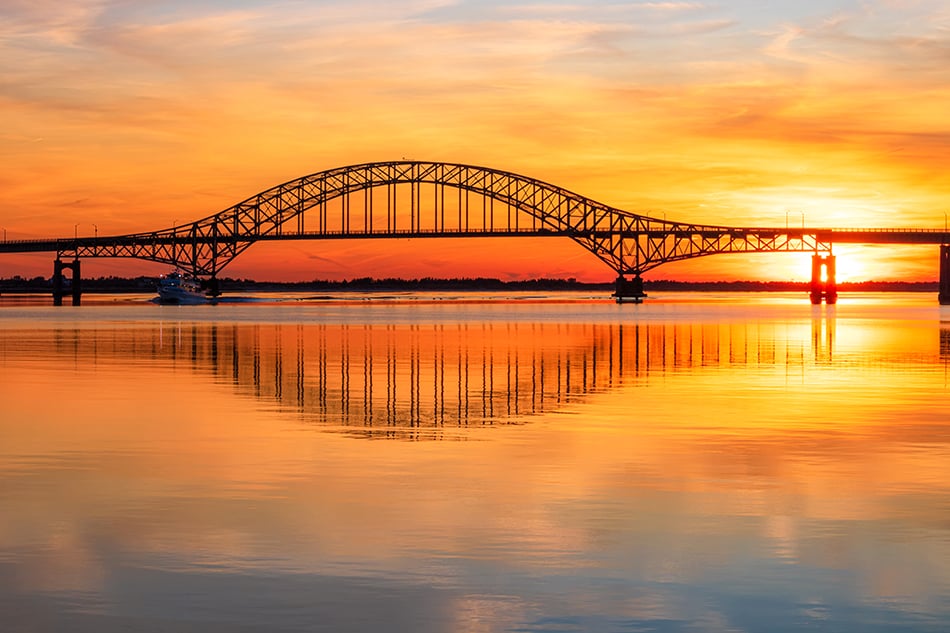 A Tied-arch bridge is also sometimes called a bowstring girder bridge or a bowstring-arch. It typically possesses an arch rib on every side of the deck; it also has a beam on every arch that serves as a support for the deck. There are erect ties joined to the arches that lend support to the deck from the top. This kind of bridge is somewhere in the middle of a suspension bridge and an arch bridge because they share properties with these two kinds of bridges. On the one hand, they are similar to arch bridges.  Any force applied to the deck is relayed by the upright ties on the deck as tension to the curved top chord. These upright ties attempt to flatten the arch and transfer the load into the abutments.

A bottom chord ties together the tips of the arch in this type of bridge. This bottom chord lets bridge builders build ones with foundations that are not so strong since the force on the abutments would be little. A good example of this type of bridge is a bowstring that absorbs pressure by keeping both sides of the bows in contact, and then it will eventually flatten out by itself. 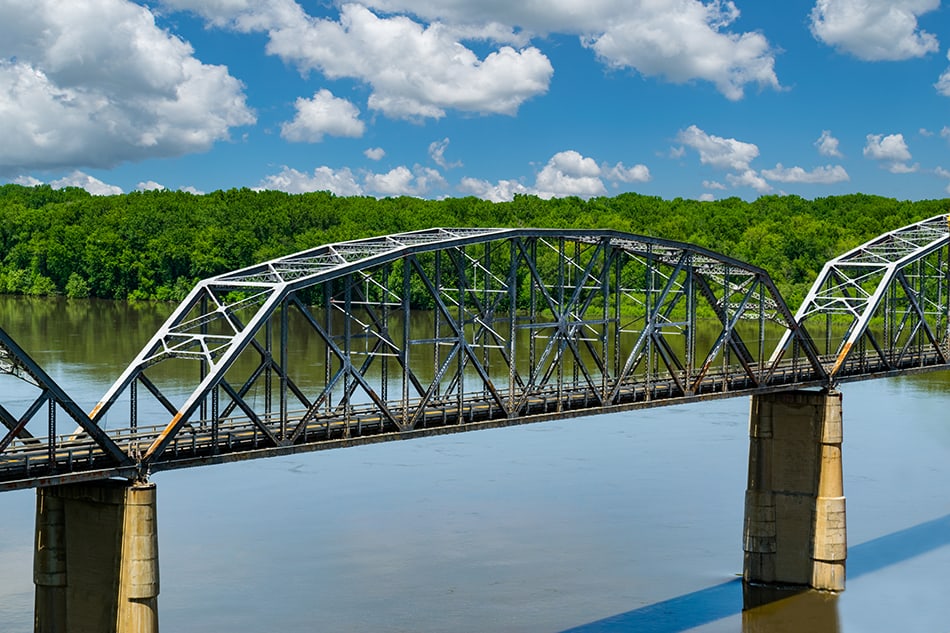 This is a type of bridge that is built with the use of trusses. A truss is a framework of interconnected elements that form a triangle. In this type of bridge, the span length runs between 50 meters to 110 meters.

Truss bridges have very rigid trusses; they also so light in weight yet can support very heavy loads. These trusses usually perform the work of transferring the loads from one point to a wide area. The bridge weighs a lot lighter when compared to other types of bridges.

The principle behind a truss bridge is the fact that triangles cannot be distorted by stress. Therefore, these bridges can be quite long, yet the trusses do a great job of bearing loads all over the bridge.

This is one of the best types of bridges since it provides the best strength for its weight. This simply means that it can hold the most weight per weight of its construction materials. Even though truss bridges been there for very many years, it is still regarded as the strongest bridge. This is because the design itself looks very simple, yet it is very capable of load-bearing. This is because it consists of triangle structures. There are often vibrations on this kind of bridge caused by traffic or even weather conditions. However, the loads on the bridge are always spread right across the bridge in triangular sections. As this load is spread across the bridge, it increases its stability.

The truss bridge possesses several advantages, and they include:

Truss bridges also have a couple of disadvantages, and they include: 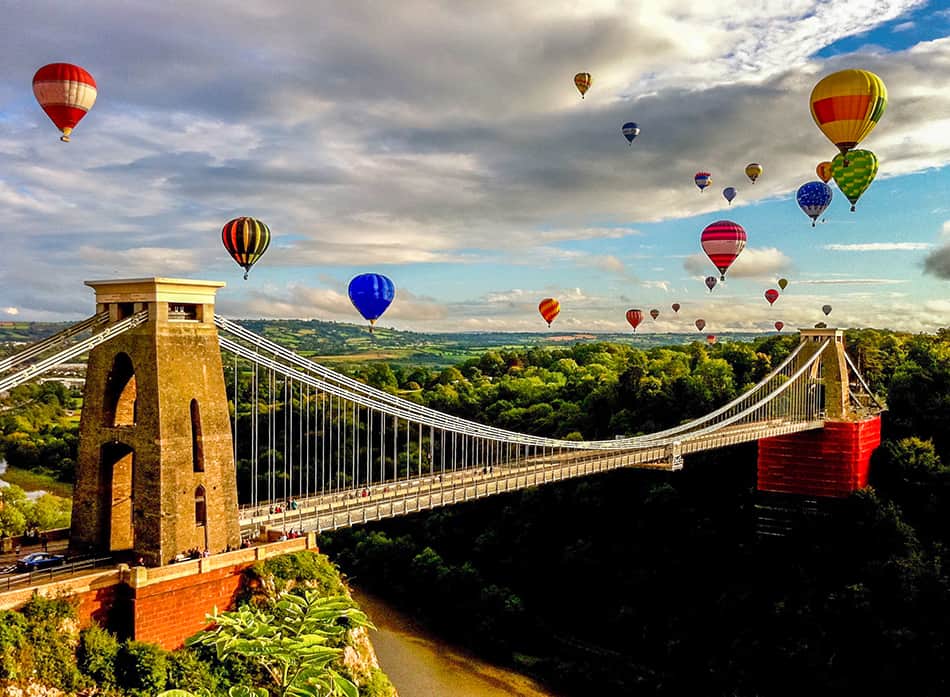 They are built by hanging up the deck slab with suspension cables. The deck of suspension bridges is usually hanged using cables of steel that are normally linked to 2 towers, and then they are held by anchors on the two ends of the bridges. Moreover, the deck slabs have a truss just under the deck, and they help to secure the deck in an appropriate position to lessen the propensity of the deck swaying.

When weight is placed on the suspension bridge, the roadway slabs compress, and the weight travels up to the cables, chains, or ropes to be able to transfer to towers. These towers then disperse the compression straight to the earth through the anchors.

The anchors are also supported by the cables that travel parallel to the bridge. These bridge anchorages are usually concrete blocks that are massive and do a good job of dispersing the forces of tension directly to the earth. These anchorages are strong rocks or concrete blocks that are massive. The bridge is grounded in them. The forces of tension are passed first to these anchorages and finally to the earth. The suspension bridges have a span length that runs between 150 meters to 2000 meters. One of the most famous suspension bridges in the USA you can see via photos are the Golden Gate Bridge in San Francisco, California.

The suspension bridges have a couple of advantages such as:

The disadvantages of the suspension bridges are: 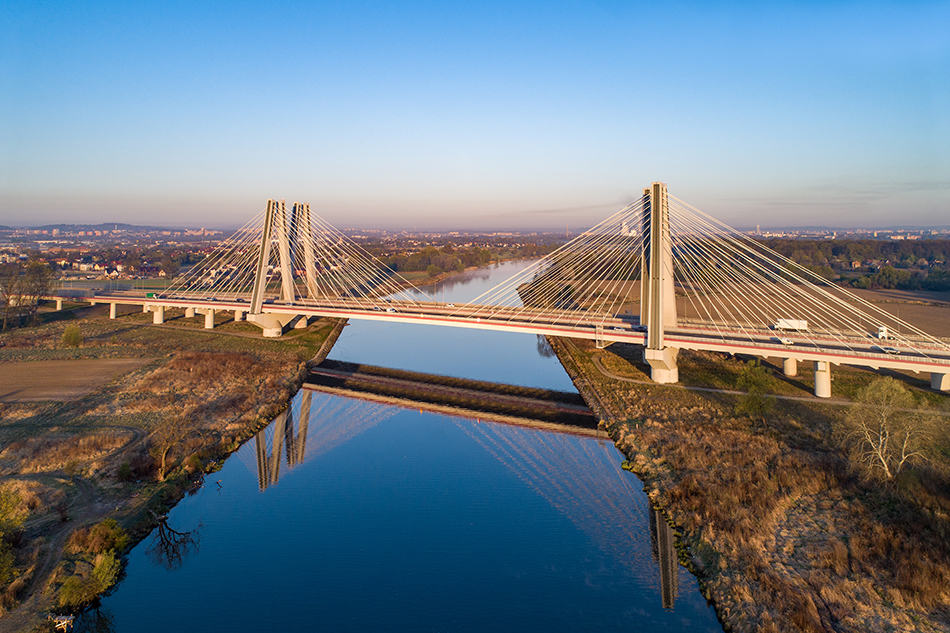 This kind of bridge is modern and very similar to suspension bridges. In this bridge, the cables are usually directly connected to the tower rather than make use of suspended cables. The tension force that acts on the cables is constant.  The cables here are also stretched since they are fixed on the deck. Cable-stayed bridges do not possess any anchorages that put up with the compression, and it only just a single tower to bear the compression.

This kind of bridge has a span length of only 500 meters to 1000 meters. The cables of the cable-stayed bridges are usually connected directly to the deck at very different radial points.

The advantages of the cable-stayed bridges include:

The cable stewed bridges also have some disadvantages such as: 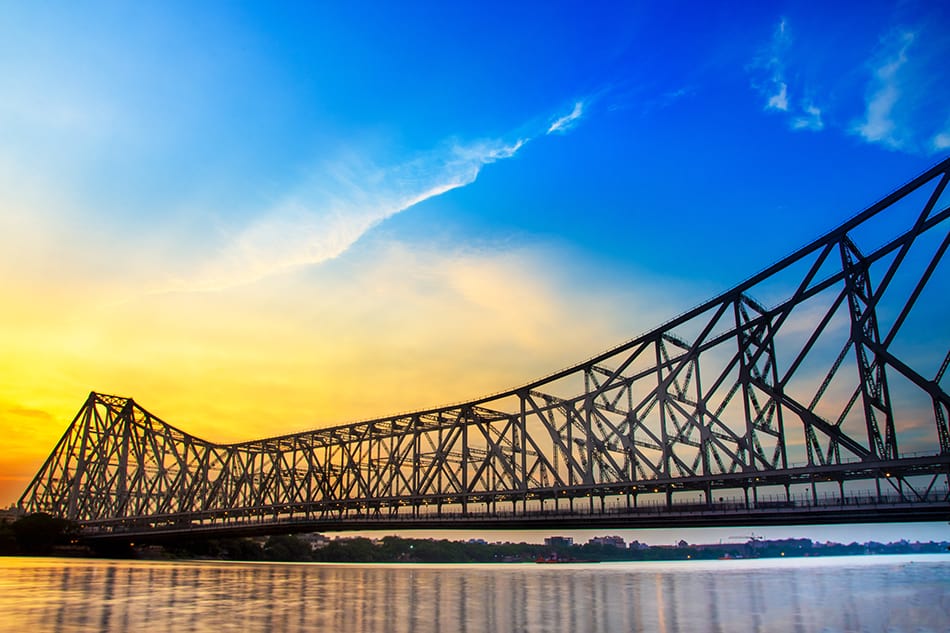 Cantilever bridges get their name from cantilevers, which are a long beam that has only been fixed at one end and the second end is free. This type of bridge is usually built with three spans with two outer spans connected at the shore. This type of bridge runs a length of between 150 meters to 500 meters.

When force is applied to this kind of bridge, the supports at the top are subjected to a pulling force (tensional force), and the bottom is subjected to compression, which is the pushing force. This balances the bridge, and provided the force on the bridge is balanced, it can stand in a stable position.

Pros of a Cantilever Bridge

The advantages of having the cantilever bridge are:

Cons of a Cantilever Bridge

The disadvantages of the cantilever bridge are: