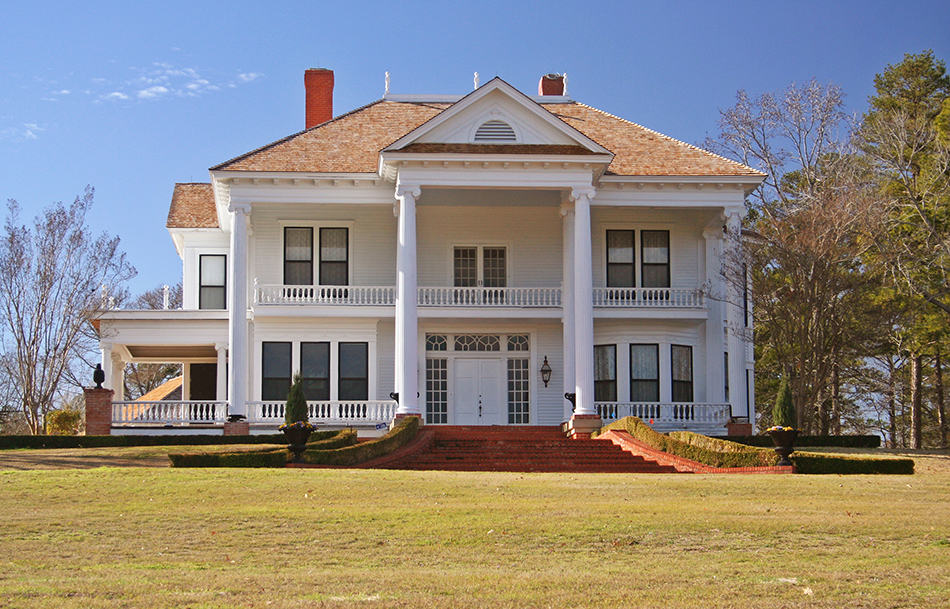 When one hears the word “Antebellum”, a vision of grand, stately mansions that often served as plantation homes for the Southerners comes to mind.

These homes are much like the manor house in Gone with the Wind, featuring opulent columns and covered verandas. While there are many different Antebellum architecture styles, the term generally covers a vast variety of Southern houses built before the American Civil War. It is precisely this historical significance that makes the Antebellum such an interesting architectural style.

In this article, we’ll explore the fascinating history of Antebellum-style houses, their main characteristics, along with some famous examples and types you should know about.

What is Antebellum Architecture? 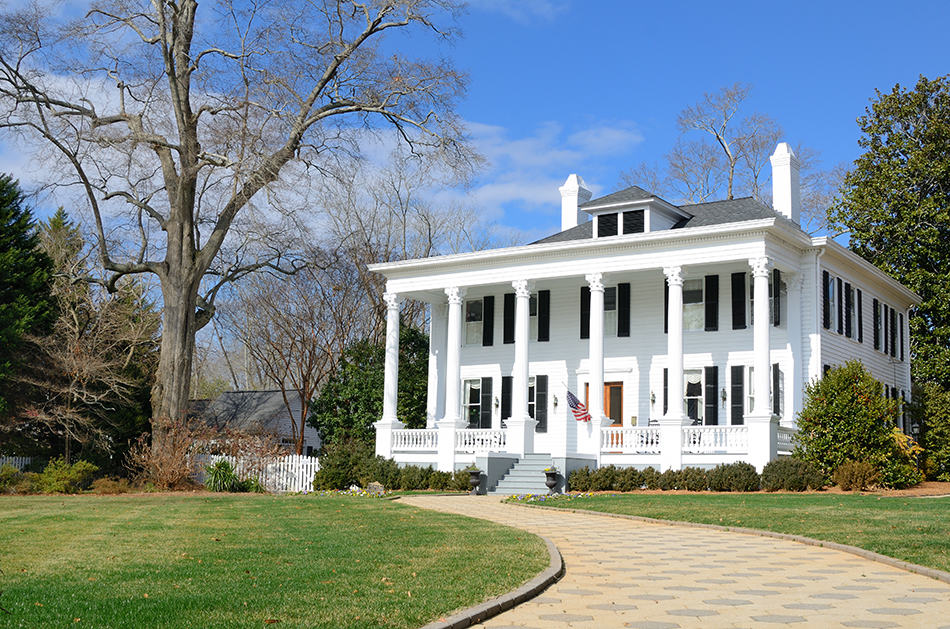 Antebellum is a term used to define the style of stately residences mainly found in the Southern US. Built in the 19th century, these controversial grand homes were intricately designed with their deep roots in slavery. The word Antebellum comes from Latin and translates into before the war, which in this case references the American Civil War between the South and the North from 1861 to 1865.

It is important to note that Antebellum isn’t a particular architectural style. Rather, it is a reference to a period in American history that triggered high emotions.

In the 1820s, the Greek Revival style gained much popularity in the US and Europe. This style became the rage after Mediterranean countries discovered ancient Greek buildings that revealed the classical forms of architecture introduced by the Romans and the Greeks. As a result, both the Southern and Northern US adopted this architectural style and built plantation mansions based on the Greek Revival architecture. It soon became the symbol of national pride in both Europe and the US.

It is easy to assume these Southern residences were merely built for the self-indulgence of slave masters. However, in reality, they were often built for the purpose of wealthy men gifting them to their brides on their wedding day. But most people can’t overlook the dark history behind these homes since the plantations stood for brutal oppression and development of slavery in the US.

Since most Antebellum homes resemble Greek Revival and a few other styles (we’ll go into further details in the next section), they feature grand, boxy symmetrical architecture with central entrances in the front and back of the property. All such homes have Greek-type columns or pillars with vast verandas or balconies.

Other architectural details of Antebellum homes include hipped or gabled roofs, evenly-spaced windows, elaborate balconies, and covered front porches with a central entryway opening to a stately staircase and often a cupola. The balconies of these residences run along the outer edge of the house.

The deep overhangs of the roof shield the interior of the house from direct sunlight of the south. There are numerous windows on all sides of the house to keep it cool. The sheltered outdoor areas like the porch and verandas provide lots of shady spaces for family gatherings, and the porches often featured multiple wall partitions to use the space for different purposes.

The other features of Antebellum homes were mostly for decorative purposes. Columns are designed to draw attention whilst creating the impression of opulence. The interiors of these mansions were just as magnificent as the exteriors. The extravagant features include open stairways, huge foyers, grand ballrooms, and intricately designed plaster work along the ceilings.

The Antebellum architecture draws its inspiration from a variety of Southern home traditions. These homes often exhibit characteristics from the Greek Revival as well as French Colonial and others, which we will go into more detail about here.

The key features of all the styles we’re about to describe characterize the Antebellum architecture. All the homes are grand in scale, with symmetrical facades featuring large, evenly-spaced windows and columns. The triangular pediments at the front and back shelter the house from direct sunlight. The roof is always gabled or hipped with a spacious central cupola that offers a view of the plantation grounds. Here are all the architectural styles closely linked to the Antebellum:

Although this style has evolved over the last few centuries, the modern-day’s French Colonial homes have retained many of their traditional features. They were once small and symmetrical structures, but over time, the number of rooms increased in an open-plan layout, which was not separated by a foyer.

Some of the must-have French Colonial characteristics include square, wooden facades with a central front door and two windows. These homes often boast a large, wrap-around porch as their key element.

You will see many French Colonial style homes in New Orleans and Louisiana but not that many in other parts of the Southern states. These homes have the added benefit of cross-ventilation systems that allow cool air to circulate throughout the rooms of the house – a much-needed benefit in the hot Southern regions!

The Gothic Revival boasted picturesque architecture that was a popular movement found throughout the US. These homes were built in the first half of the 19th century. To continue the wave of the prominence of Antebellum architecture, people took the style further to Europe by embracing Gothic Revival. In the US, this style can be seen on adorning buildings that feature simple ornamentation and symmetrical shape design.

But perhaps the most commonly identifiable characteristics of Gothic Revival architecture are the pointed arches used for doors and windows. Steeply pitched roofs with front-facing gables were the other characteristic details of these homes.

Does the term Federal remind you of the Federal government of the US? That’s exactly what this architectural style means. It connotes an era in US history when the Federal governance system was developed. The architecture of this era refers to the buildings constructed during the construction boom.

Many European-style architectures were incorporated into Federal, and the homes were heavily influenced by ancient Greek and Roman structures. After the American Independence, Federal homes won special recognition and were the architectural symbols of America’s hard-fought independence.

A Federal style home typically consisted of a simple rectangular or square box with two or three stories and two bedrooms. Some Federal homes were built for larger families and featured projected wings and wrap-around balconies.

In some, you can even find geometrical, elliptical, fan-shaped, or circular motifs as the main decorative design of these homes. But Federal-style architecture didn’t just become popular for residential homes; they were also adopted for office buildings and government residences.

In the US, this style reached its peak from 1825 to 1860 during the early Civil War. Greek Revival became the first recognized national style of US architecture as it gained popularity from the East Coast to the West Coast and beyond.

Houses in the Greek Revival style were typically painted in white to resemble stucco and stately mansions. With bold details in simple moldings, gables, heavy cornices, and pediments, it is hard not to fall in love with this style of home. The gable-fronted facade is, in fact, one of the most enduring legacies of this style in the US. 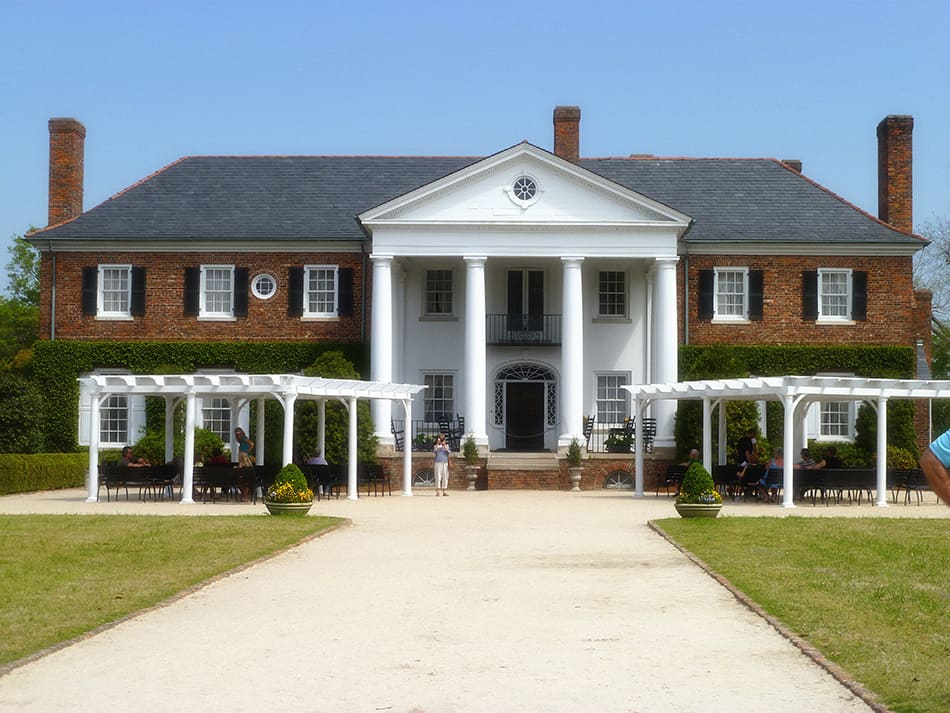 Boone Hall is a plantation near Charleston in South Carolina. It was established in the 1600s before the American Revolution.

The Boone family were the original settlers of the Southern colony, with their residence representing the typical Antebellum architecture. Today, the plantation is a tourist attraction that references the enslavement during the Civil War. 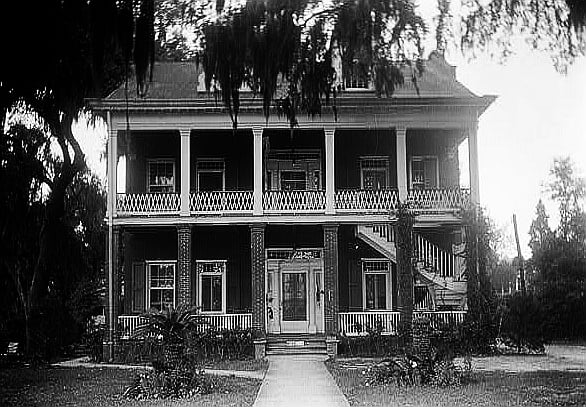 The Tullis Toledano manor was built in 1856 by a cotton merchant Christoval S. Toledano. Located in Biloxi, Mississippi, this mansion is a classic example of Greek Revival architecture, with huge brick columns and vast verandas on each floor. 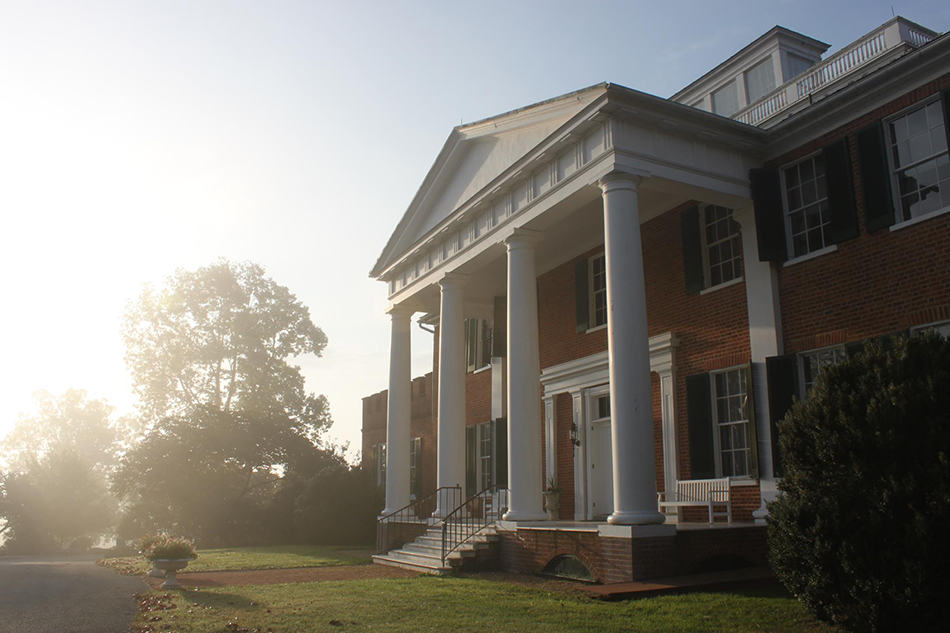 Credit to Own work

Located in Boyce, Virginia, the Long Branch Estate was originally built on 1000 acres of land by Robert C. Burwell in 1811. It is currently 400 acres of house and farm, which is 30 minutes drive from Washington, D.C.

Although some time has passed since the original Antebellum architecture was introduced in the deep south of the US, it is still possible to adapt the style to new homes. A central porch supported by pillars, large windows, and a carved balustrade are the main features of a modern version of an Antebellum home.

You can even limit embellishments by choosing square columns over ornate ones. If you are inspired by these luxurious residences but don’t want to go all out on the elaborate architectural styles, simply add a few of the main characteristics we’ve described above to your modern home for an elegant touch.