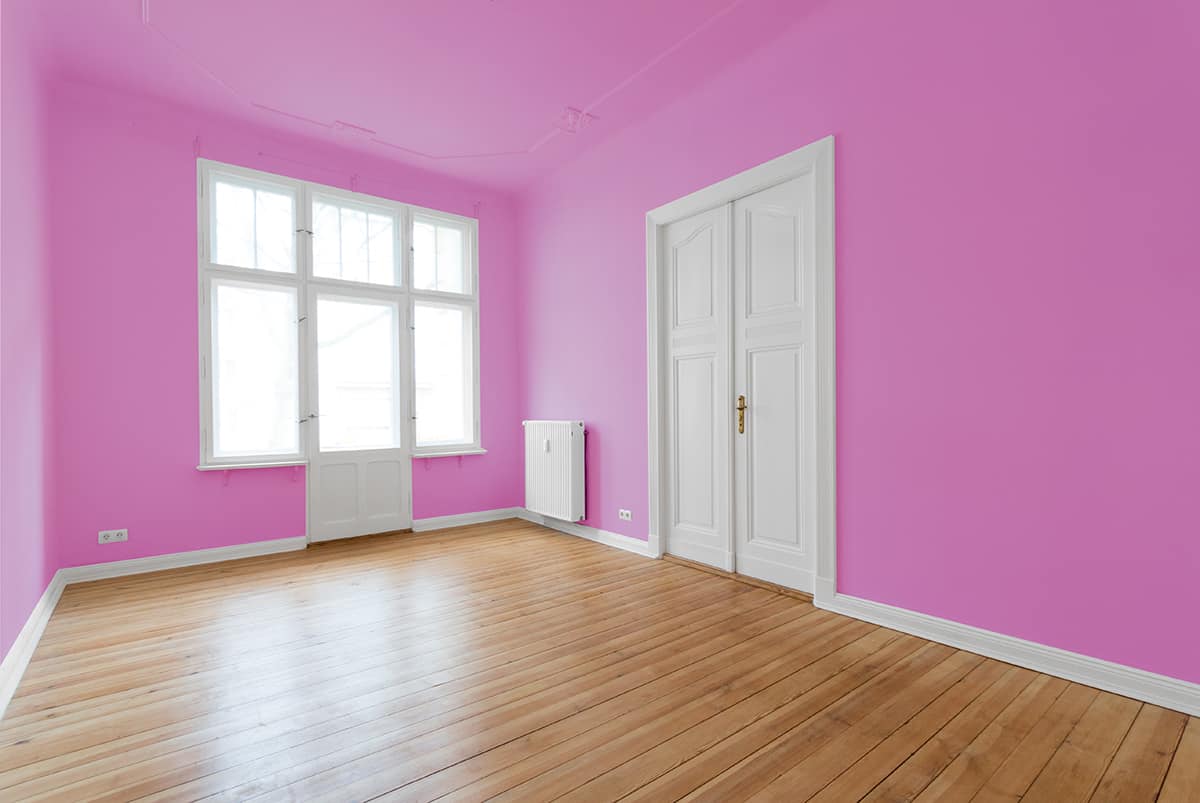 What is the Color Orchid?

Orchid has been known as a color since the early 1900s, as a reference to the bright shade of pink-purple that orchid flowers often come in. Orchid is a bold and bright color that can demand attention, but it actually isn’t heavily saturated, so it doesn’t come across as overpowering or intense. Instead, it has a more lighthearted, almost flirtatious appeal.

Orchid is a shade of violet, which has pink and gray undertones, though it is classified as a purple color since this is what it most closely relates to. Orchid is an alluring color, and in nature, it is actually designed as a means of attraction. The chemical in orchids that results in the purple petals is called anthocyanins, and the point of this is to attract pollinators such as bees and butterflies, who will transfer pollen between plants to ensure fertilization.

There are several other shades of orchid in the color world, such as wild orchid, which is a medium shade of sweet pink, and dark orchid, which is a darker and slightly more intense version of orchid. Orchid received special recognition as a color in 2014 when Pantone recognized Radiant Orchid as the color of the year.

What Does Orchid Color Mean? 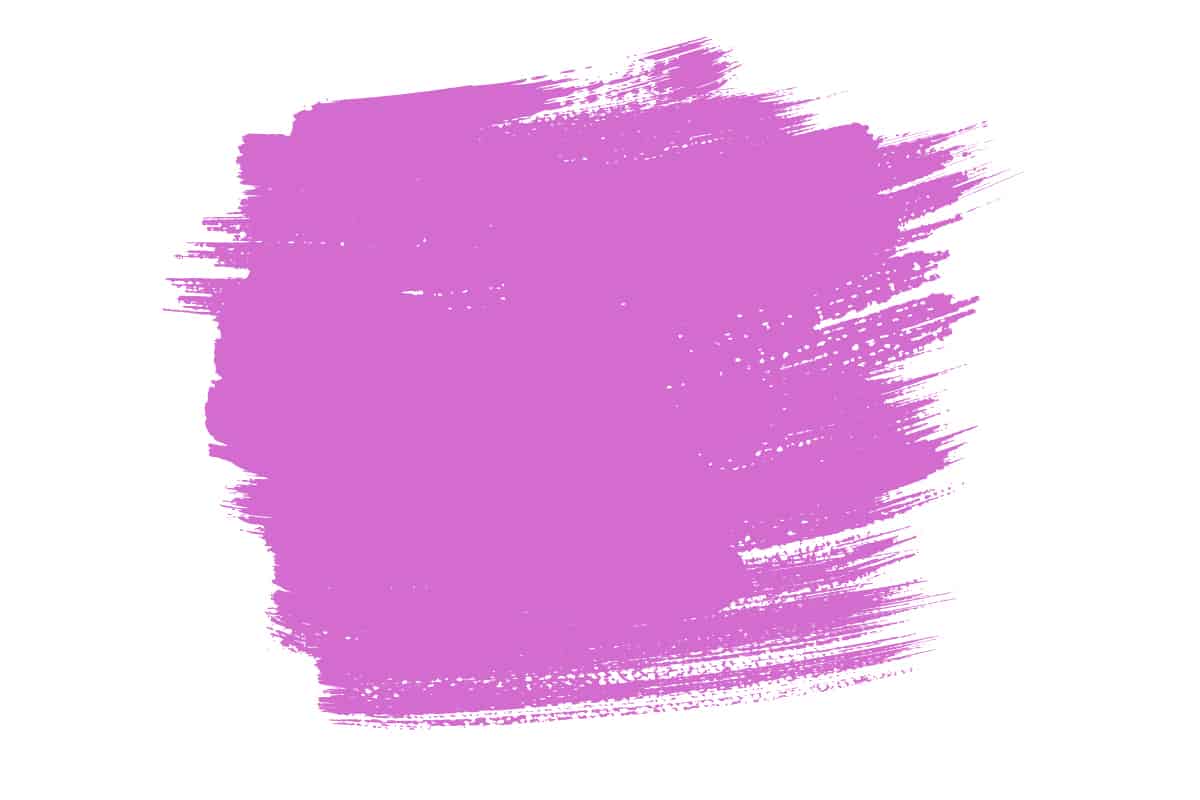 Orchid is a shade of purple with a generous splash of pink. Purple is synonymous with royalty and wealth, while pink is more playful and feminine.

When you combine both of these colors, the resulting shade will offer numerous meanings, including grace, elegance, romance, admiration, and respect. In terms of the orchid flower, gifting a purple orchid bouquet to a friend or family member is seen as a sign that you admire them.

In interior design, this color can translate in a number of ways depending on the colors you use alongside it and the way the space is styled. In a kitchen with white walls, you could paint the kitchen cabinets in orchid for an uplifting and slightly quirky look. In a bedroom that is predominantly olive green, a few orchid scatter cushions on the bed would add a contrast and make for a playful feel. 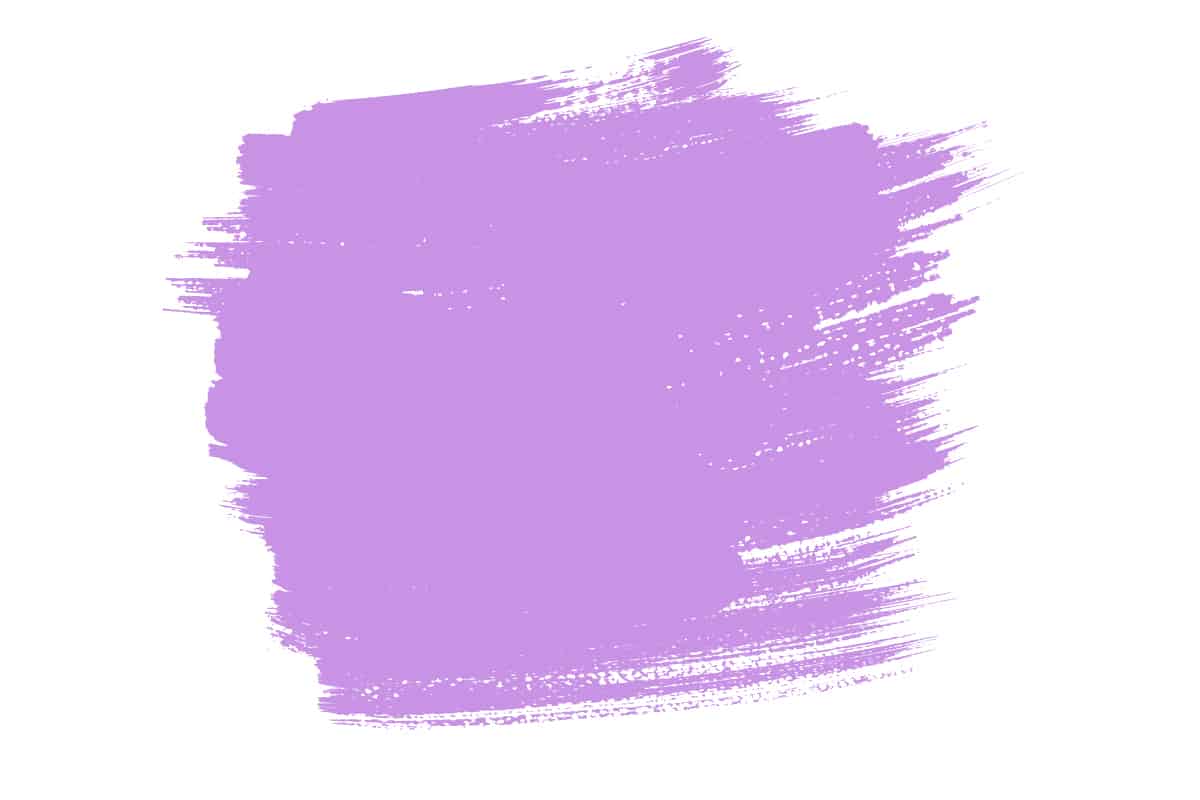 Violet and orchid are close to each other on the color wheel, and so are similar shades; however, violet is more saturated, which gives it a bolder and stronger look compared with orchid.

Violet also has a greater blue presence, and so it leans toward a truer shade of purple, as opposed to orchid, which has more red tones, which results in a look that is pinker. 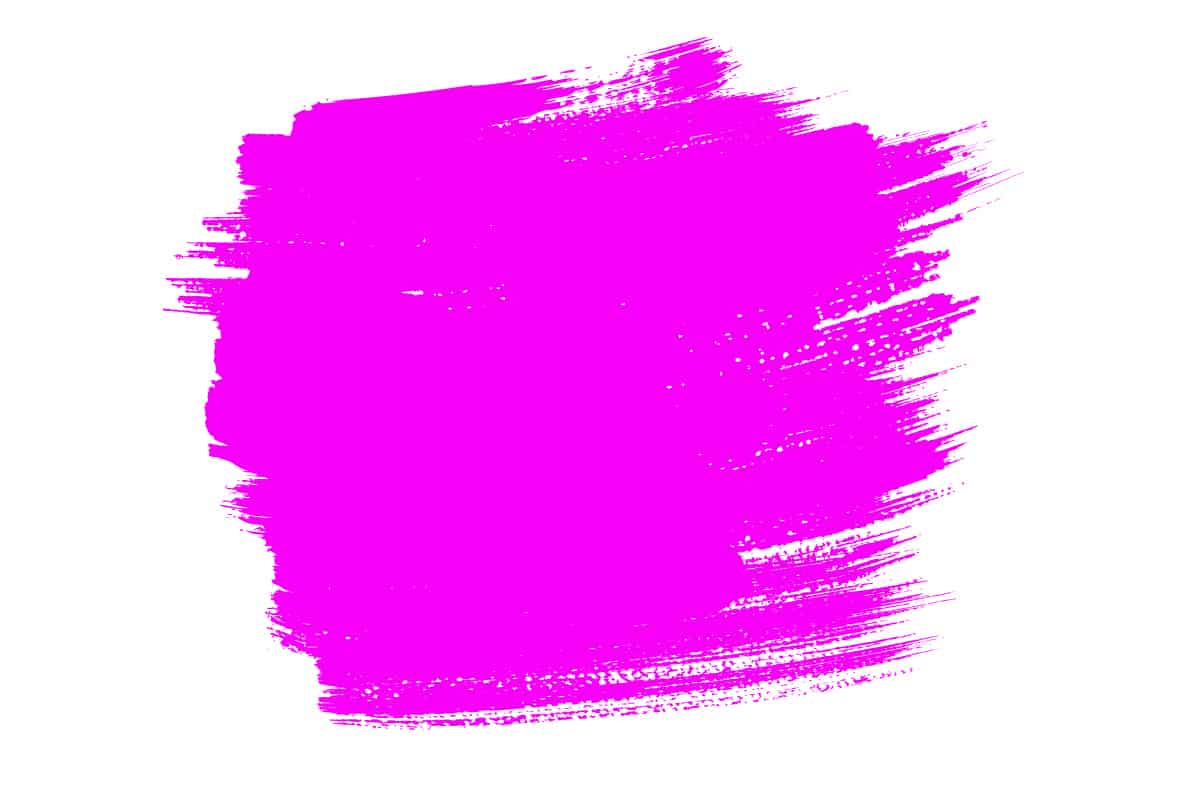 This is another color that is named after the flower of the same shade. Fuchsia may be the closest shade to orchid in terms of similarity, as both of them hover between pink and purple on the color wheel. Like orchids, fuchsia has more red in it than blue, which results in a color that is pink-purple.

However, if forced, fuchsia would be classified under pink colors, while orchid would be classed as a purple shade. Both of these shades work really well as accent colors in interior design since they offer a bold and bright splash of color that stands out and makes a statement against pale or neutral shades.

How to Use Orchid Color in Home Decor 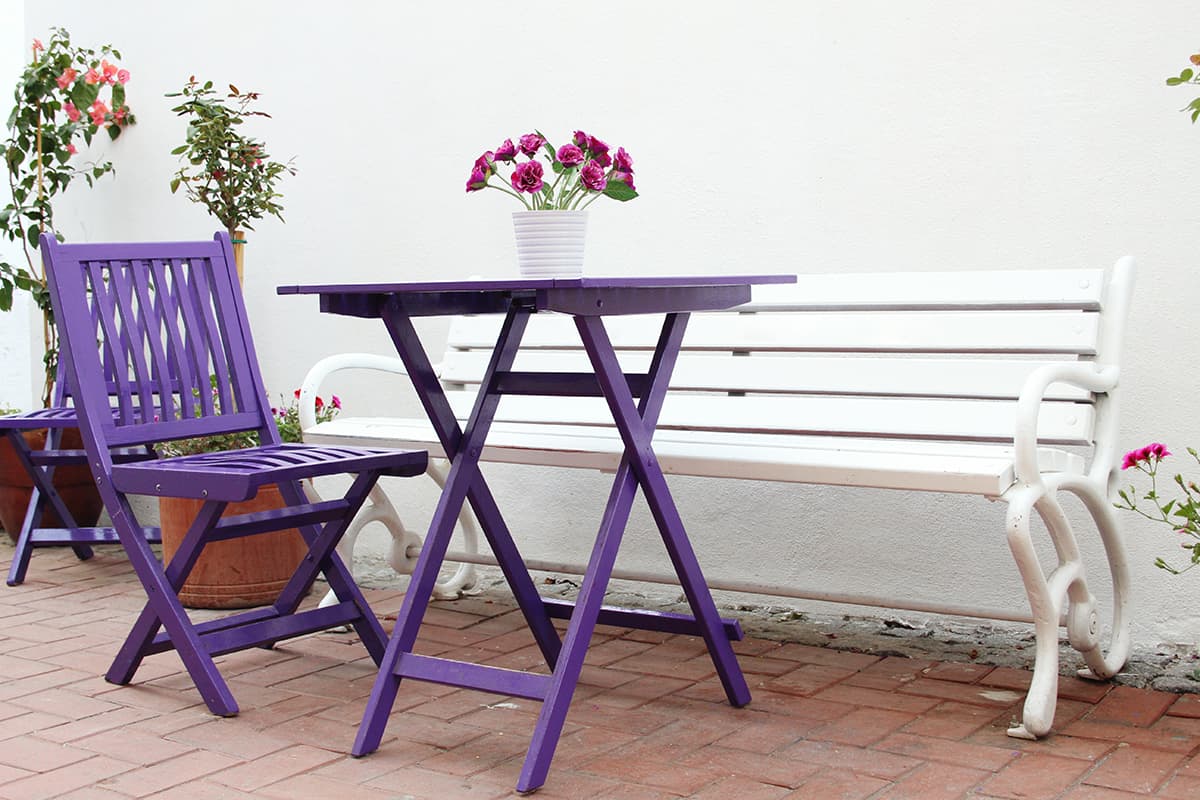 If you love the color orchid but don’t know how to work it into your home decor look, then updating some old furniture with paint in this color is a brilliant way to do so.

This is a budget-friendly way to transform the look of items in your home, and it takes very little time. The result is a new dresser or dining chair you love, in an unusual color that adds personality to your space.

In a bedroom, paint a wooden bed frame in orchid with pure white sheets to make a bold statement, or in a soft buttery yellow dining room, paint the dining table in orchid as a centerpiece in the room which is both contrasting and complimentary.

Orchid is a color that people will either love or hate. If you are a fan of this purple shade, using it on all four walls in a space might seem a bit extreme, so instead, opt for painting the color on a single wall as an accent. In a bedroom, paint the walls behind the bed in orchid and then paint the remaining walls in a soft shade of gray.

Tie the orchid wall into the space with a small selection of other orchid items, for example, an orchid cushion on the bed and an orchid rug. Leave the rest of the room quite neutral so as not to overwhelm the space or make it feel too intense. 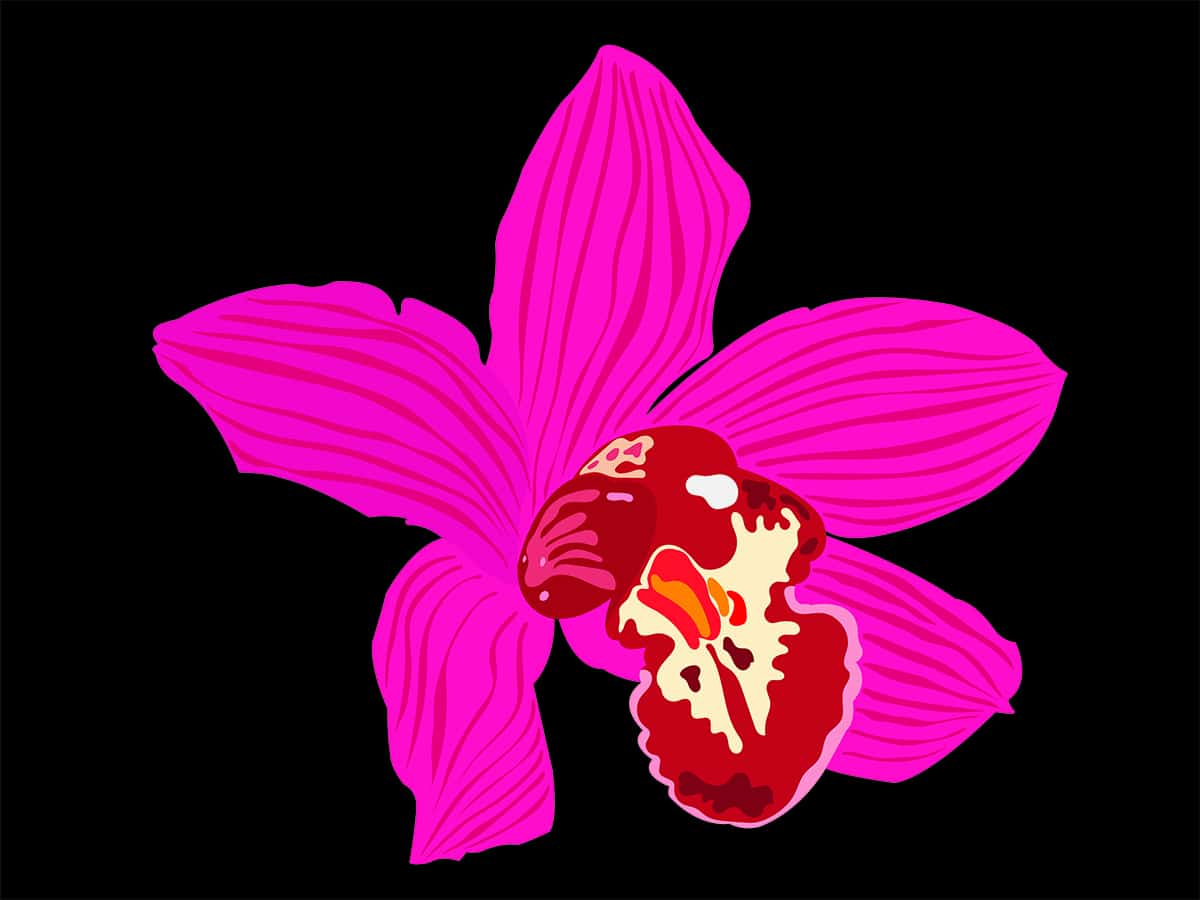 Orchid is a vibrant color that looks beautiful in patterned prints because you get a strong hit of the color without it becoming too strong or dominating. Patterned prints featuring the color of orchid can have a floral theme or opt for stripes, geometrics, or even orchid-colored animal prints. You can introduce these colors into your space in various ways.

Start small with a few patterned pillowcases featuring splashes of orchid, or make orchid your focal point in a room with a patterned printed wallpaper on an accent wall.

A really contemporary and unusual way to use orchid in home decor is by choosing one single item in the color for a room. This will ensure that the eye is immediately drawn to that item, making it a statement piece in the room. For example, in a bedroom with pale pink walls, choose an occasional chair positioned in the corner of the room with velvet orchid colored upholstery.

In a dining room with sage green walls, display a statue of a dog spray-painted in orchid on a shelf. The result will be interesting and quirky and make for a talking point among visitors.

Colors that Go with Orchid 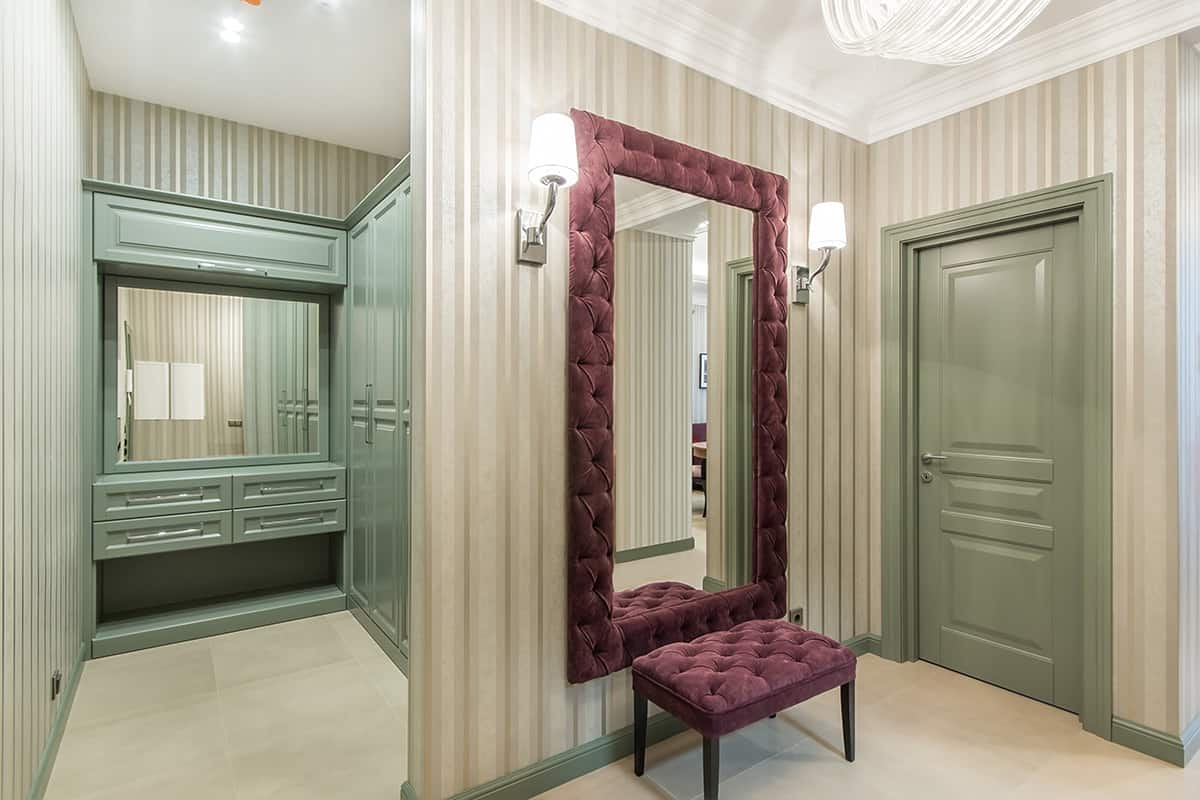 Green and red are contrasting colors, and although orchid is not a shade of red, it does contain a generous amount of red which is what results in the pink-purple tone.

As a result, despite purple not being the direct contrasting shade to green, it does offer a striking contrast due to the presence of red. Bright green and orchid together would be very bold and overstimulating, which isn’t a look that most decorators lean towards.

However, as olive is a more subtle and muted shade of green, an orchid and olive green color combinations create a contrast that feels striking without being too intense. In a living room with olive green sofas, add orchid-colored cushions, or set a bouquet of purple orchids on a nightstand in a bedroom with olive green walls. 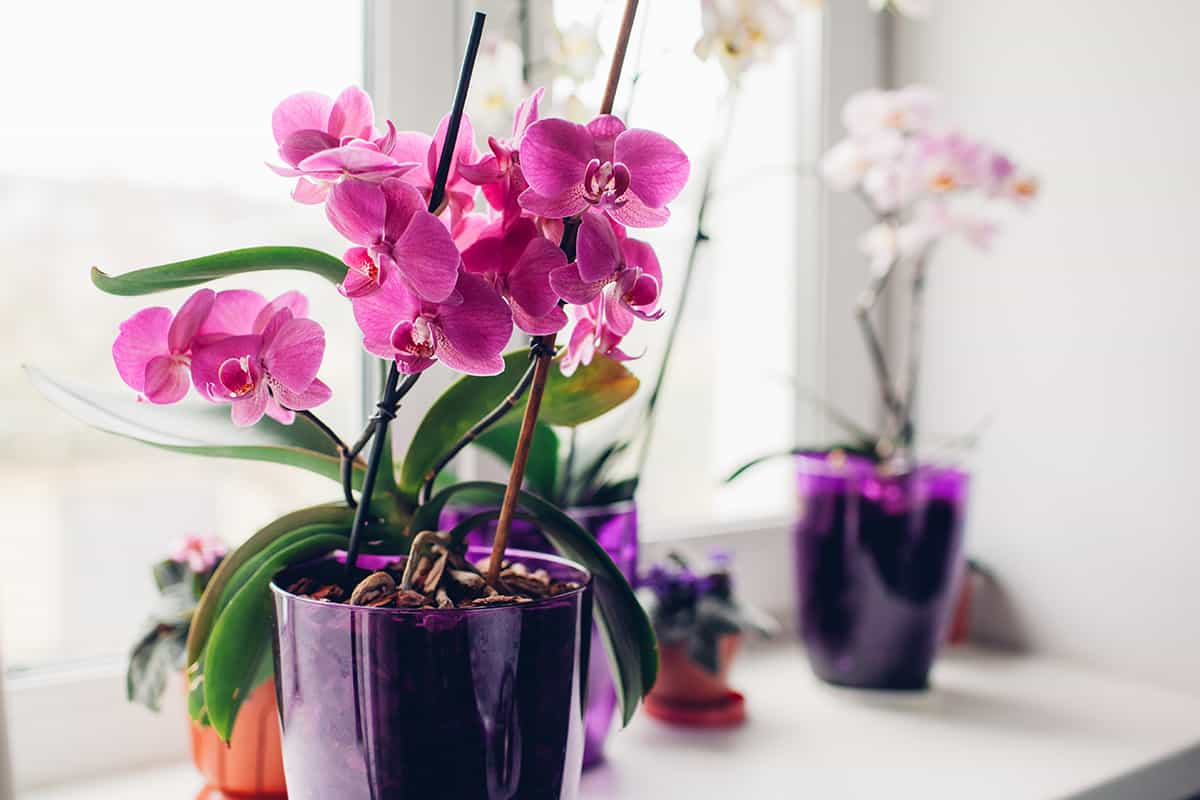 Orchid is among the colors that go well with hunter green. These combinations provide a nice contrast. Hunter green is deep and muted, which ensures the contrast between the two colors isn’t over the top.

In a room that has been painted in hunter green, the atmosphere will be dark and subdued, so orchid accents will stand out and lighten the mood. 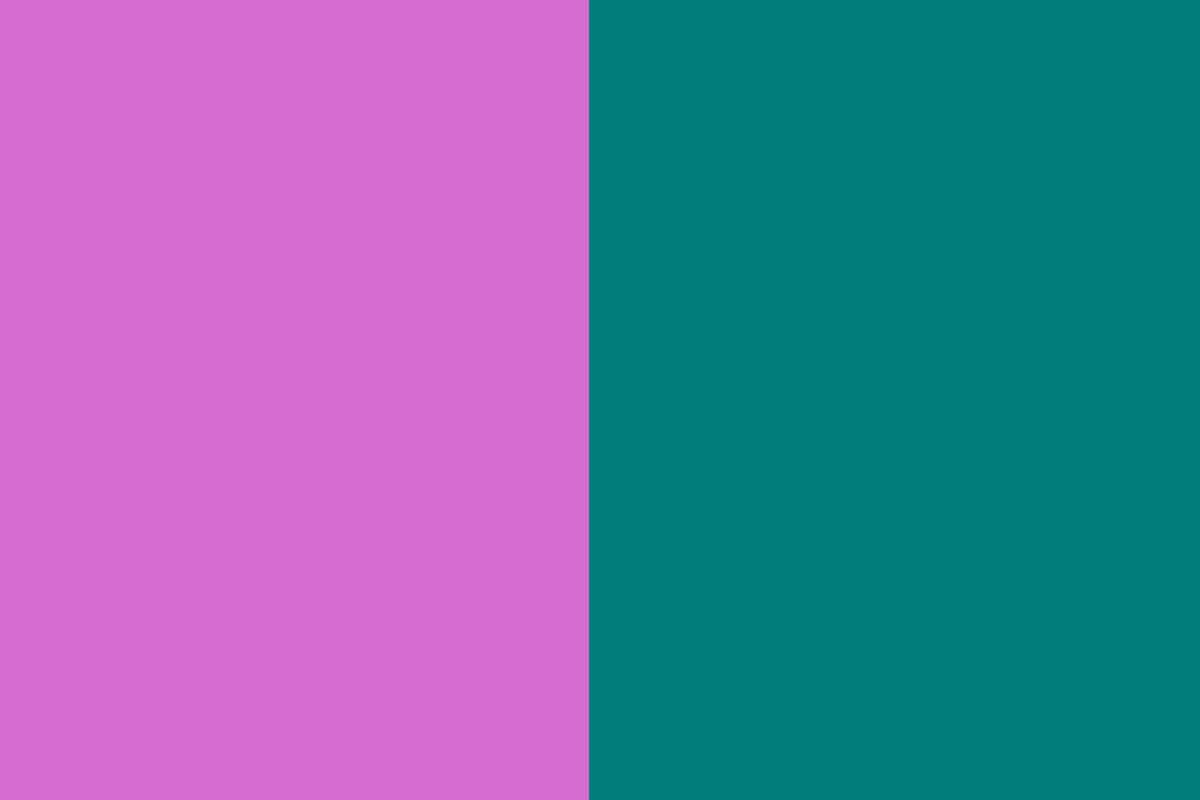 Teal is an intense shade of blue-green that leans more towards blue than green. It will look striking next to orchid, making for a tropical style color scheme that works well in a dining room or bedroom. Paint dining room walls in teal and choose curtains in a white fabric with an orchid-colored pattern.

The addition of white to this color scheme will help to neutralize the contrast so that a sense of balance is achieved. In a bedroom, use wallpaper for a feature wall that has an orchid-colored print on it, paint the remaining walls white and choose teal-colored bed sheets and accessories. 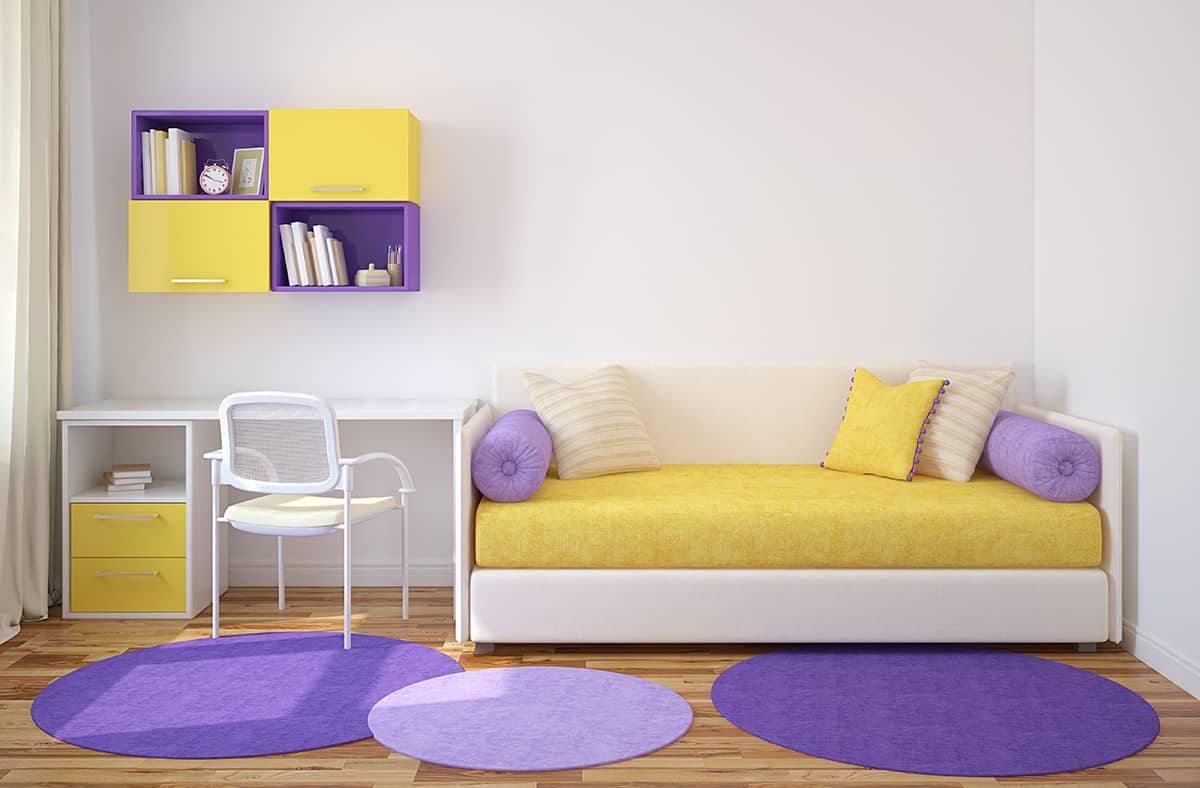 Yellow and purple are directly opposite colors on the color wheel, which means that lemon yellow and orchid are both contrasting and complementary shades.

Orchid is a vibrant shade of purple, so in order to avoid a contrast that is overstimulating, use a muted shade of yellow such as lemon yellow or butter yellow. Orchid accessories set against a lemon backdrop will really make the yellow shade pop. 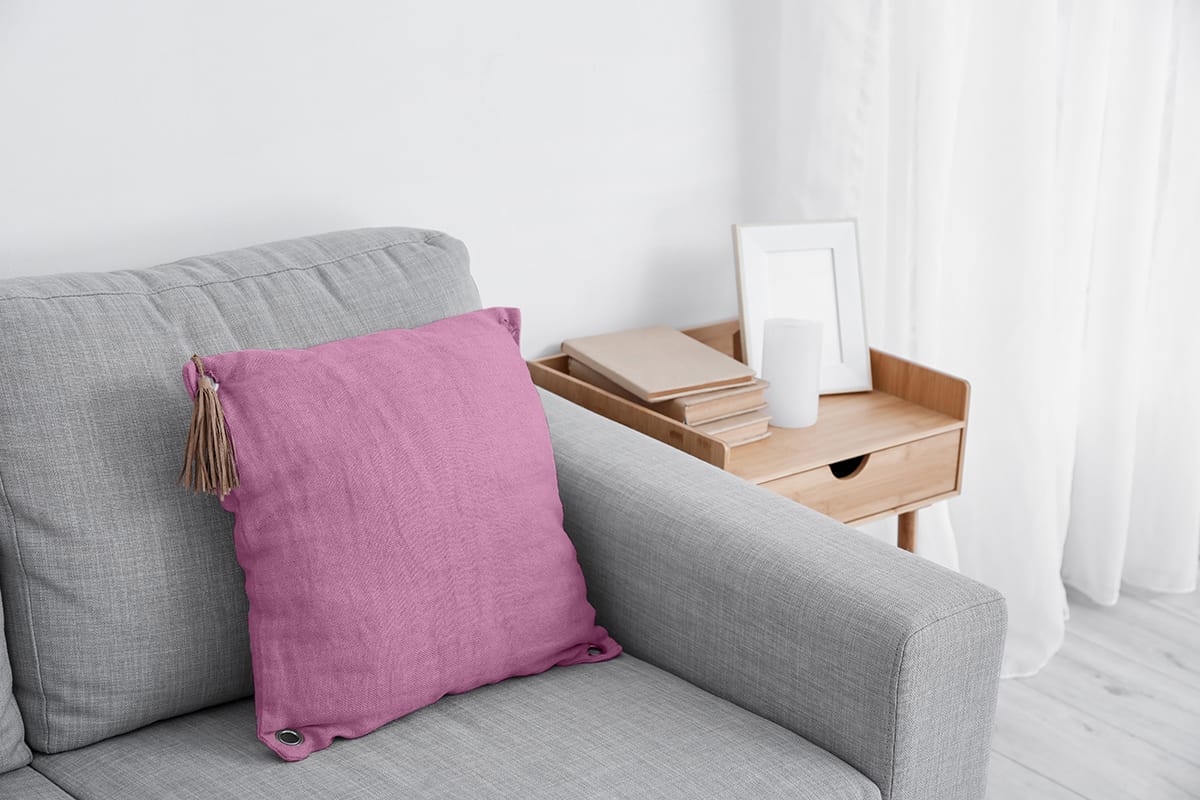 Pale gray walls are a popular choice in any room of the home, but they can sometimes come off as bland. If you want to add interest and create a more vibrant look in your gray room, add some soft furnishings in orchid, such as cushions or art prints.

If you want a high-end designer look, choose one bold statement piece in an orchid color and position this as a main feature in the room, such as an orchid upholstered sofa. 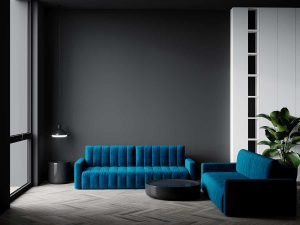 6 Colors that Go Well with Blue and Gray 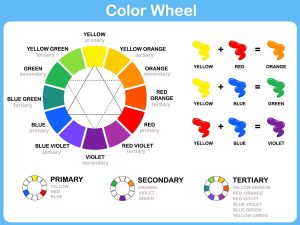 Color Wheel in Interior Design – How To Use It 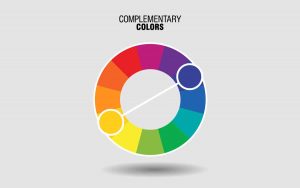 How to Use Complementary Colors In Interior Design 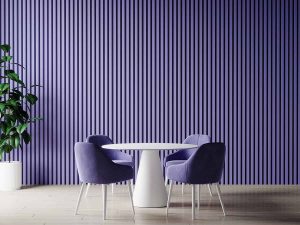 9 Fantastic Colors that Go with Purple