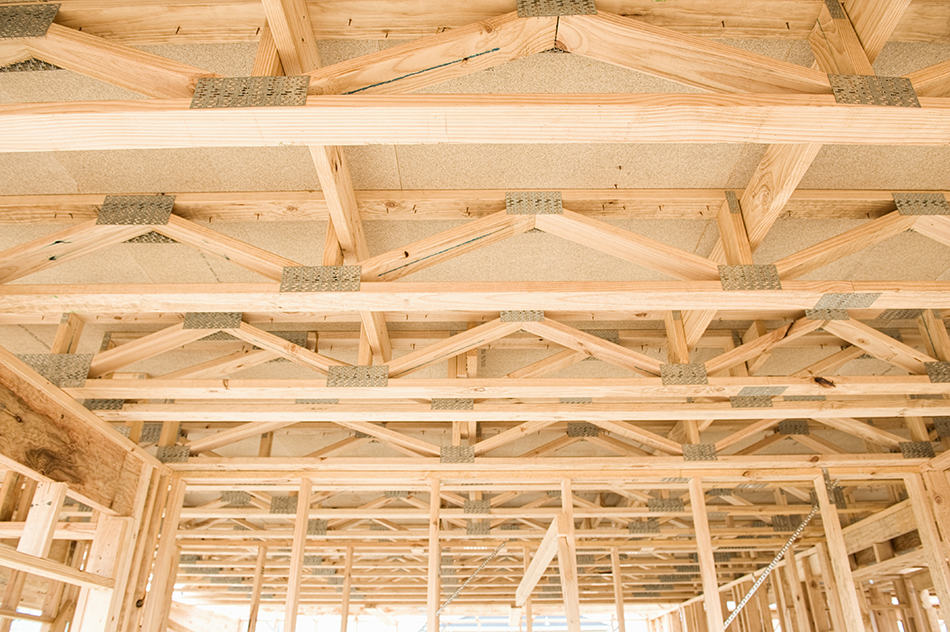 A ceiling joist is a part or component of the house that you won’t see daily. But unknown to many homeowners like you, it performs a necessary and important role in our homes. Ceiling joists are not only critical in maintaining your house’s structural integrity but can also fulfill an aesthetic element.

So, what’s a ceiling joist, and what does it do in our home? This article discusses ceiling joists, their functions, sizes, and types. You’ll also learn how to find a ceiling joist and if you can cut through one in preparation for a major home improvement project.

What Is a Ceiling Joist? 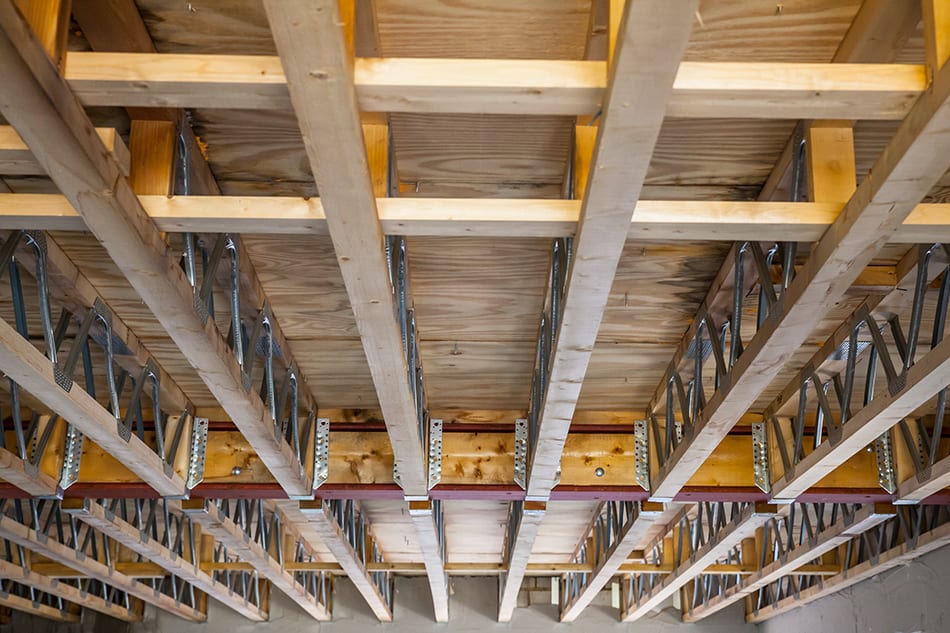 Ceiling joists are those pieces of timber or plasterboard placed on top of the wall frame. It runs parallel from one wall to the opposite wall of the house. It is often a horizontal member, although it can also be placed on a scope under special circumstances.

It supports the roof as well as the ceiling. If there is a floor above, the ceiling joint in the ground floor serves as the floor joist for the second level and ceiling below it.

A ceiling joist strengthens the house construction. Without it, the weight of the roof would likely spread the walls and compromise the structural integrity of your house. It also carries the ceiling material. It is where the plywood, masonite, and other related materials are nailed onto.

These days, contractors employ the use of prefabricated roof trusses consisting of a couple of rafters and a joist. These pre-fabricated components are firmly fixed to form a robust triangular structure.

It is common for homeowners and even novice builders to confuse a ceiling joist with other structural members such as beam and rafter. Compared to a beam, a joist is way smaller. A beam, meanwhile, is commonly used to support joists. On the other hand, a rafter is typically a series of sloped members designed to support the roof deck and associated loads like tiles or fiber cement.

What Are the Types of Ceiling Joists?

The hidden ceiling joist is the more common of the two joist types. This type of joist is covered up by ceiling boards. It looks good in all homes regardless of the type of house. It is also practical as it hides the wires and keeps them away from the eyes.

Should you opt for hidden ceiling joists or simply cover the ceilings? You might be tempted by the allure of exposed beam ceilings. And why not? This can bring back images of rustic and country-styled homes.

But think twice about having exposed beam ceilings. You’d be surprised to learn that even in the days of yore, ceilings were closed up whenever possible. Closing the ceiling hides unpainted and unfinished timber, beams, and floorboards that can be an ugly sight. Moreover, it is more energy-efficient as the ceiling board lets you heat the room far more efficiently.

What Is the Standard Size of a Ceiling Joist?

There is no standard joist size, although most homes have ceiling joists in a board size of two by 6 inches. You’d also find joists sizes ranging from two by four inches and up to two by twelve inches. The differences in the sizes of ceiling joists apply to the width of the board, which establishes the ceiling’s height.

For example, a 2 by 4-inch joist would hang into a room by 4 inches and make the ceiling height. On the other hand, a 2 by 12-inch joist affixed in the same position would have 12 inches into the room and decrease the height of the ceiling by eight inches.

In newer homes, it is common for joists to be compliant with building regulations. But in older properties or homes, the likelihood of variations in sizes and spacing of ceiling joists is quite high.

What would be the problem with undersized joists, you may wonder. To start with, undersized joists would sag because of the load they are carrying. The same issues will crop if the ceiling joist spacing is too far apart.

Like other building timbers, ceiling joists are prone to decay or damage from rot and woodworm. Damp decay may also happen if the loft insulation was installed without any measure to prevent or minimize condensation in the loft space.

How to Find a Ceiling Joist? 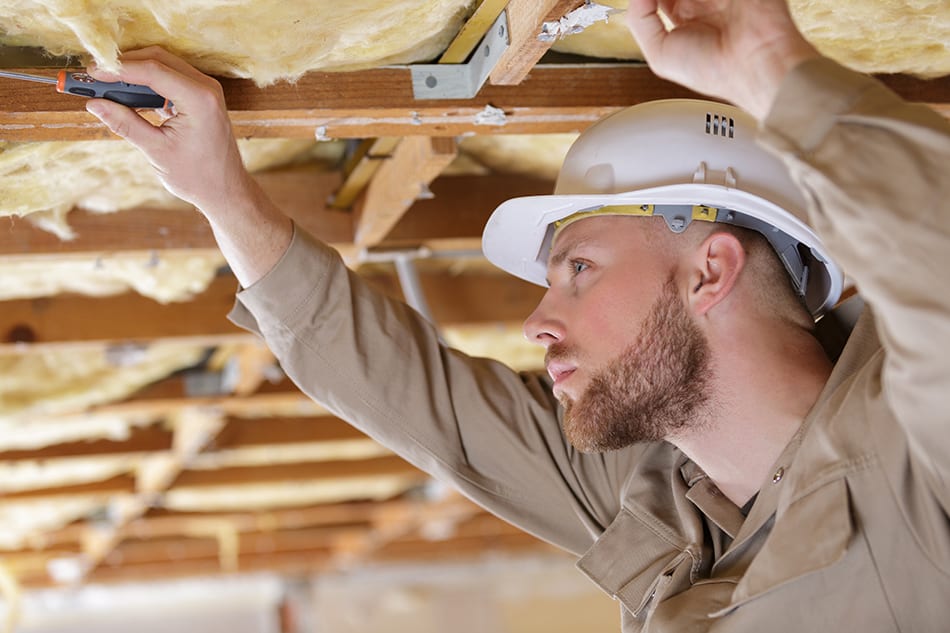 You can do this by using a flashlight. If you can’t pull it off employing the flashlight method, you can use a stud finder, a simple handheld device used in locating framing studs.

Let’s start with the flashlight method. It’s quite easy if you can get it correctly. You’d also need a ladder, measuring tape, a hammer, and several nails.

Standing on a ladder to get near the ceiling, hold the flashlight at an obtuse angle. You’d want the light to run horizontally to the ceiling boards. Find dimples in the paintwork. If you find one, it’s likely the location of a nail holding the ceiling board to the joists. Once you’ve located one, use a measuring tape so you can easily locate the other nails.

If you’re unsure if the joists are spaced 16 or 24 inches apart, get the measuring tape. Measure 16 inches from the nail and a right angle across the roof. Lightly hammer a nail onto the ceiling. You’d know that you’ve found the next joists if there is a lot of resistance as you hammer the nail. If this doesn’t work, try again, but this time measure 24 inches.

Still not found a joist? You are probably measuring in the wrong direction. If this is the case, you should try running the measuring tape the other way.

Now, if you’re unsuccessful in finding the ceiling joists using a flashlight, you can try the stud finder method. The good news is that a stud finder is an inexpensive device designed for locating studs and ceiling joists.

Can You Cut through a Ceiling Joist?

The short answer is yes– you can cut through or remove the joists. This could be the most difficult portion of the home improvement project, though.

However, keep in mind that to maintain the structural integrity of the ceiling, the load that the cut joists were carrying be delegated to a modified support system. It’s a very common mistake by handymen to remove a portion of the ceiling joists and not replace it with additional support members. The usual thinking is that the floor or ceiling looks as safe and strong as it was before the joists were removed.

To sum it up, the often-ignored ceiling joists play a role that’s as critical as any other part of the house. It’s only reasonable and practical that homeowners like you are aware of this fact.