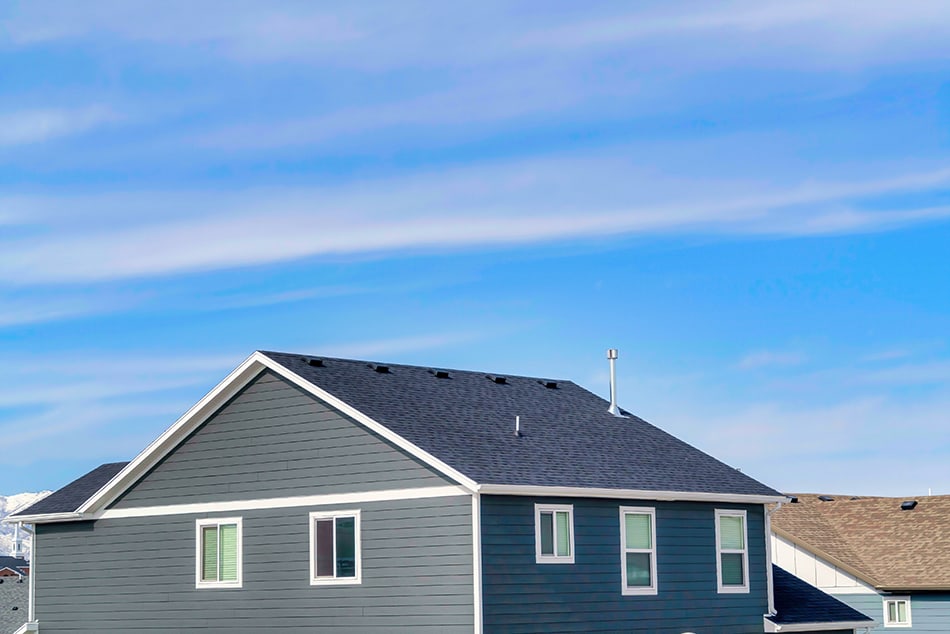 The gable roof design is one of the most popular in the US. Often seen in ranch-style homes, this type of roof shape is a common style found in Cape Cod, New England. Most of these homes feature garages, front porches, or dormers with gable roof structures that add to the visual appeal of the buildings.

If you’re in the process of framing your roof or designing a new one, then you may want to consider a gable roof. There are various gable variations, which we will explore here as well as the pros and cons of gable roof style to help you make your decision.

What is a Gable Roof Design? 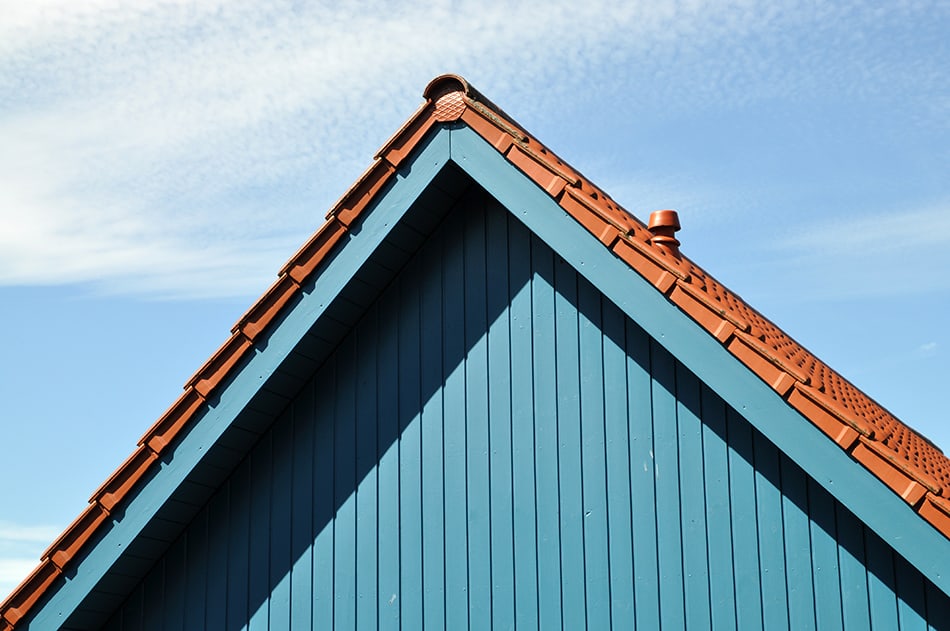 Gable roofs first arrived in the US in the early 1600s. The majority of old buildings in colonial times had gable roofs. This type of roof design consists of a flat-faced shape like an A. The triangular end-shaped roof is referred to as a gable. This triangular end is made of siding or stone to match the home’s exterior.

A gable roof can have a single or multiple gables, but it almost always has two sloping sides that form a ridge like a triangle.

Gable roofs date back as early as the 1600s in Ancient Greece, where they were favored for temple roofs. These architectural features soon became popular in North Europe and the US. In the medieval gothic era, gable-fronted buildings were commonly seen in Germany. These roof variations became popular in the US in the early 19th century. During the Renaissance period (between the 14th and 17th centuries), the side-gabled roofs were preferred as they were inspired by Italian architecture.

If you have a tight budget, a gable roof is a more affordable option. When compared to other roof designs like mansard, the overall installation costs work out much lower because of the simpler design of this roof. This is the biggest advantage of gable roofs, hence the reason why they are more popular than hip roofs. Since a gable roof only has two roof planes instead of four (hip roofs have four!) you will spend less money on the siding material.

Gable roofs benefit from a larger attic space. This is ideal for growing families who want additional roof space to convert into a children’s playroom or bedroom.

Constructing a gable roof allows you to have plenty of material options. From clay tiles and metal sheets to concrete shingles, you can use just about any tile material to build and complement the roof based on your requirements.

When compared to the adverse weather tolerance of hip roofs, gable roofs don’t perform as well. This is because of the flat surface of the roof, which is susceptible to wind damage. If there is an overhang on the gable, the powerful force of the wind can pull up the roof’s truss or lift the roof away from the walls of the home. This roof style is therefore not recommended for areas prone to hurricanes. If the high wind is a concern, it’s safer to keep the roof overhang under 30 inches. Having said that, always discuss your concerns with an architect or roofing professional.

Gable roofs tend to be more difficult to build – unless we compare them to mansard roofs. The reason such homes are harder to construct is due to the different heights of the roof shape. In addition, they may need extra brackets in order to enhance their wind resistance. This is time-consuming and requires installation skill.

Gable roof designs come in many variations, some of which include: 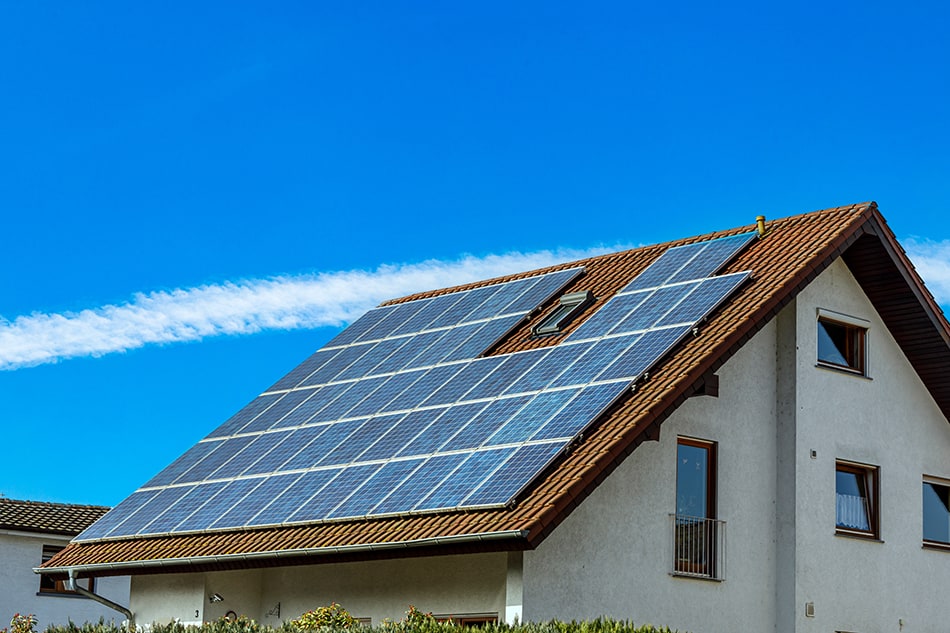 A box gable has a triangular addition at each end of the roof, with a boxed section at the end of the roof. This gable variation is more distinguished at the triangular section of the design so it stands out more than the standard gable roof. 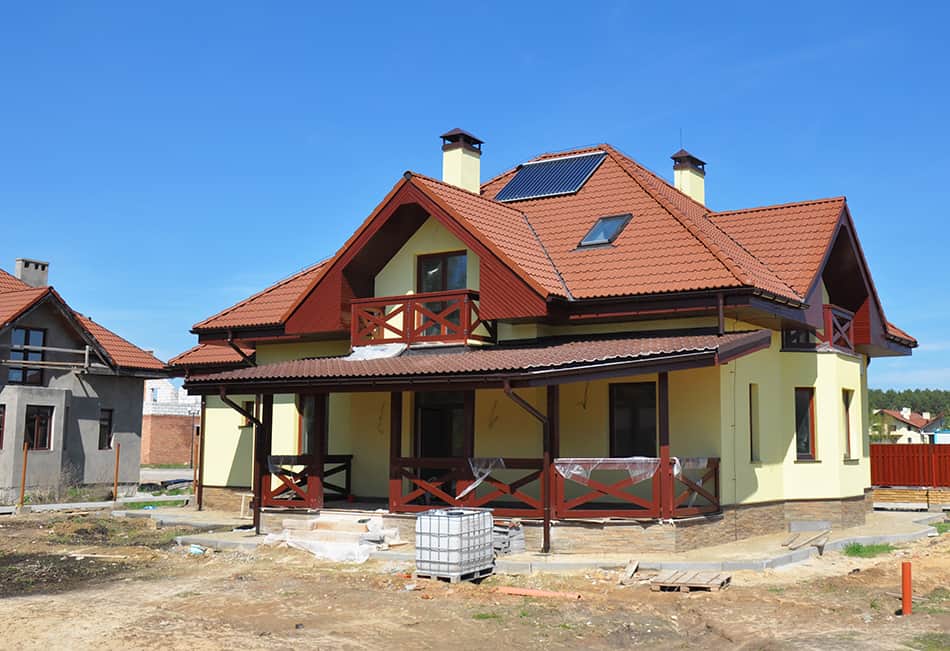 A cross gable type of roof features two or more gable-shaped roof lines that intersect. These rooflines often consist of two ridges installed in perpendicular sections. Homes with a cross gable roof often feature a more complex layout because of the particular shape of the roof. Such houses may even have a large porch, an attached garage or separate wings. 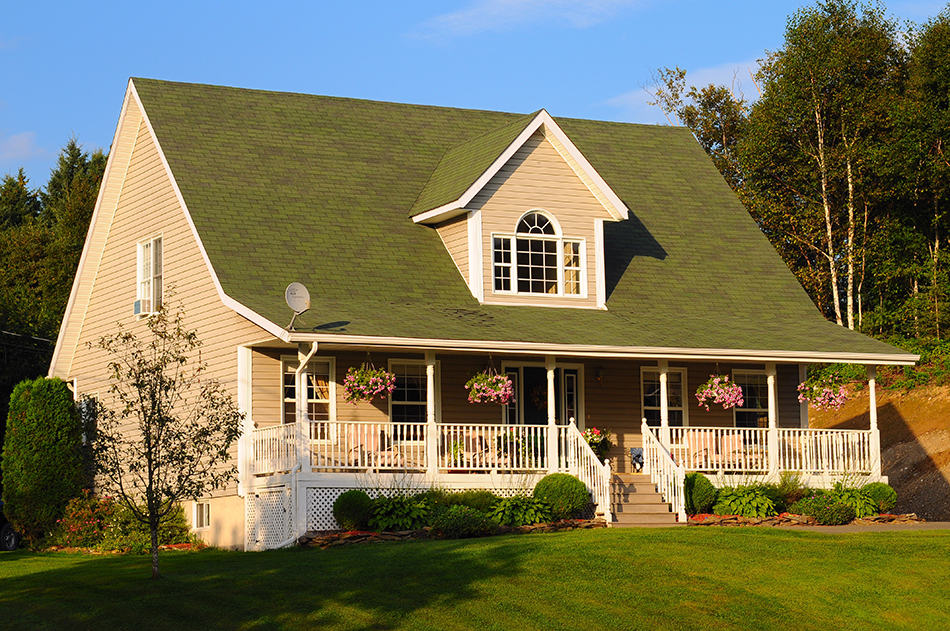 Just as the name suggests, a front-gabled roof is installed at the front of a home. The front door is normally placed right under the gable as a common feature. This gable roof variation is often seen on Colonial style homes.

Unlike a front gable that’s placed at the front of the house, the side gable is placed on the side of the gable roof. It consists of two equal panels pitched at an angle. 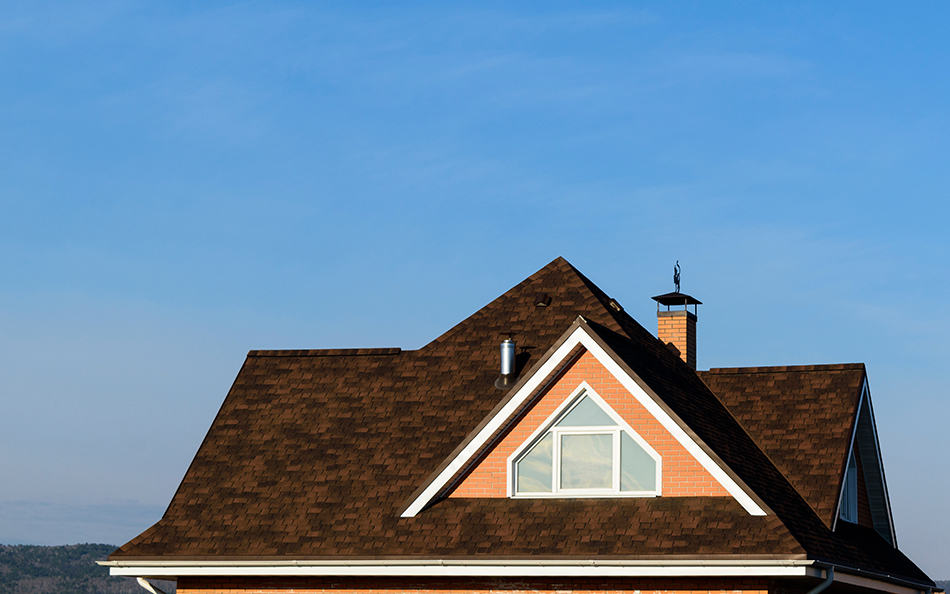 As a hybrid version of a hip and gable roof, this design variation consists of the gable being installed on top of the hip roof for the purpose of providing additional space within the attic. A dutch gable is more popular with families as they need more space. This functional gable design also enhances the aesthetic appeal of the home.

Shed gable roofs consist of three dormers, slanted in one direction. These are also referred to as half gables, which are easy to build since the rafters are all identical. 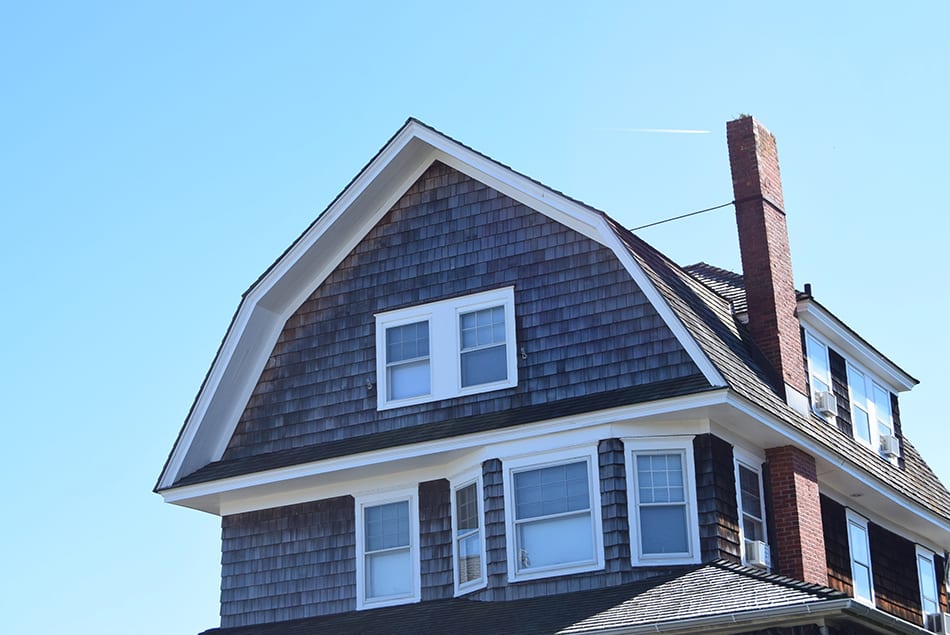 The gabled version of a mansard roof is known as a gambrel. This variation is often associated with barns and historic buildings. The design consists of two sloping roof sections, with one close to the ridge and relatively flat. The ridge closer to the eaves tends to drop down steeply for maximum use of the space in the attic. 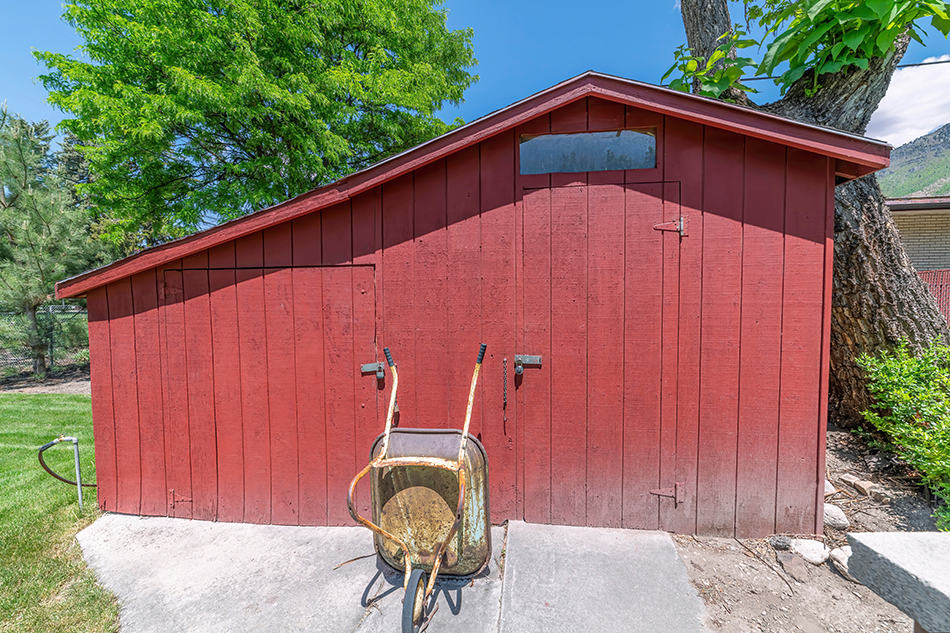 A typical Colonial-style gable roof is the saltbox design. This consists of an open gable where one end extends further than the other end of the roof. A saltbox is an asymmetrical roof design offering much more space than a standard gabled roof.

Gable Roof Vs. Hip Roof, What is the Difference?

A hip roof doesn’t have vertical wall space reaching up to its peaks. It is more likely to be sloped on all sides, forming a ridge between the adjacent slopes, hence being called a hip. There are four sloped sides on a hip roof as well as one as a horizontal ridge on top. A gable roof, on the other hand, only consists of two sloping sides.

When deciding on which is better for your new home, it all depends on the weather conditions in your region, how much space you need as well as how much you want to spend on the roof construction.

Both gable and hip roof designs cope well in rainy and snowy conditions. This is because of the high strength of the roof trusses, which can adequately support the weight of the snow. That said, the pitch of a gable roof can shed snow easier than hip. But if you live in a high wind region with possibilities of hurricanes, a hip roof will be a better option.

Hip roofs are made from structurally durable materials with lower pitches, which makes their surfaces less vulnerable to high wind damage. Gable roofs, however, have higher pitches with more tendency for the high winds to lift off their shingles. This is why it is of utmost importance to ensure your gable roofing material is of highest quality and the construction is undertaken by professional roofers. After all, with inadequate bracing, the gable roof can easily fail in an event of high winds or hurricanes.

Perhaps the biggest advantage that gable roofs have over hip roofs is their additional living or storage space under the roof. While hip roofs have a lower ceiling in the attic, it is impossible to use the space for living purposes. This additional space in the hip roof is only useful for storage. A gable roof, on the other hand, provides plenty of living and storage space. All you need to do is add some windows to your gable for maximum light in the attic.

How Much Does it Cost to Build a Gable Roof?

Generally, building a gable roof is less expensive than many other types of roof styles. The labor costs anywhere between $7 and $15 per square foot. So for a 2,000 square foot roof, it can cost from $14,000 on average. Additional dormers or gables can bump up the price, depending on your requirements.

What is the Average Lifespan of a Gable Roof?

When determining the lifespan of a roof, there are many factors to take into account, such as the quality of the installation, materials, weather conditions, and so on. A typical gable roof can last around 30 years on average. But it can last even longer if an adequate supporting framework has been used for the construction of the roof.