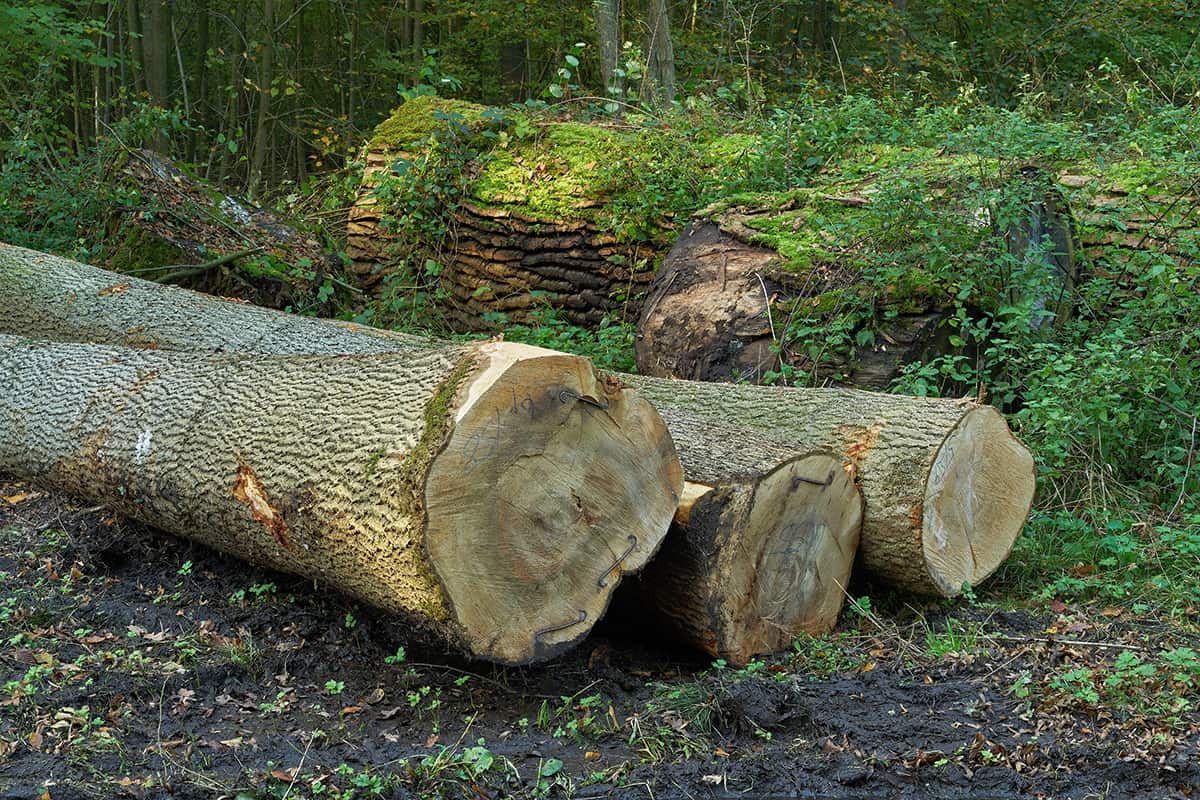 Ash is a hardwood that is known for its strength and durability, as well as its flexibility. Ashwood can come from various different ash trees, as there are over 40 species in existence, which are mostly deciduous, though a few are evergreen. Ash is considered by many woodworkers as a lower-budget version of oak.

Here we look at different types of ash wood, what it is used for, and where it comes from.

Ashwood is a type of hardwood that is extremely durable and is comparable to oak in this sense. This quality makes ash wood ideal for a range of uses where durability and strength are important. You should note, however, that ash wood is not durable when left outside and is only suited to indoor use. If left outside, ash wood will deteriorate quickly.

Ashwood has a degree of elasticity which makes it slightly flexible. This makes it particularly well suited for use on items that need to have a springy quality.

This characteristic of ash wood also makes it suitable for steam bending, which involves the wood being subjected to steam heating, and then worked into a curved shape. This is commonly done in the production of bows for bow and arrows and drum shells.

Ashwood has a light color that gives it a bright appeal when used in decor. This is the most common type of wood selected among people who are specifically looking for a hardwood with a pale color.

Ashwood takes very well to stains and paints. This makes it a good choice if you want to make your wood take on the appearance of a different kind of wood since you can disguise it with a stain. Ashwood has many similar qualities to oak, but it is not as expensive, so ash wood is commonly stained to look like oak but without the high price tag.

Despite its strength and high density, ash wood is actually among the more lightweight types of hardwood, which makes it easier to transport and easier to work with on-site. It is known to be lighter in weight than both oak and hickory lumber.

Ash is a commercially valuable wood, which is used for a range of purposes. It is a great choice of wood in instances where strength and durability, as well as elasticity, are important.

Bows are widely made from ash wood because they need to offer some degree of flexibility. The elasticity of ash wood means that this requirement is fulfilled.

Baseball bats are commonly made from ash wood since they need to be strong yet have some elasticity which prevents the bats from cracking or splitting when they strike a ball at high speed.

The bodies of early examples of motor cars were made from ash wood due to the flexible quality of this wood. The frames and other components of the car were designed to flex as part of the vehicle’s suspension system.

Ashwood, most notably Swamp Ash, is a favorite material used in making electric guitars and, less commonly, acoustic guitars. This is because of the resonance quality that Swamp Ash offers.

The flexible factor of ash wood, as well as its strength and durability, lends this wood perfectly to use in staircases. The fact that ash wood can be molded into curves when it is heated also makes it suitable for use on curved staircases.

Ashwood is strong and durable, which makes it a good choice for hardwood flooring in homes. Opt for White Ash for a lighter finish or Black Ash for a slightly darker shade of wood. Ash is less expensive to buy than oak, but it can be stained to look like oak, so it represents a good budget option if you want to save money when purchasing hardwood floors.

The strength and durability of oak, as well as its attractive pale color, make it a good choice of wood for furniture making. It stains well and is long-lasting.

Ashwood burns easily, which makes it useful for starting fires or keeping fires burning. However, it only provides a moderate heat, so it should be used alongside other woods when used as a fuel to achieve a good level of heat output. 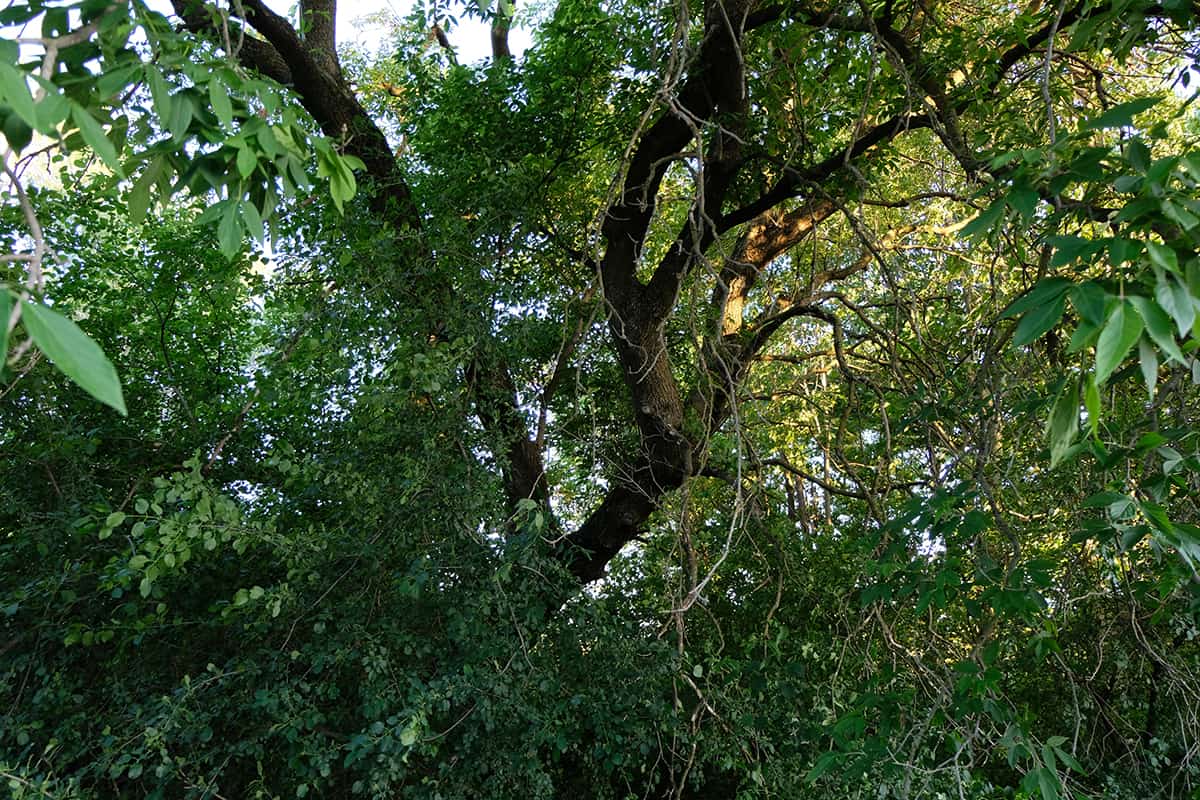 This tree is also known as Swamp Ash and is one of the types of ash made popular for use in producing electric guitars. It is native to the northern United States and eastern Canada, growing to typical heights of between 50 and 60 feet.

The color of this wood is darker than White Ash and most other types of ash, and it grows more slowly, which means it has a wider grain and a lower density.

This type of ash is known for being extremely flexible and, as a result, is widely used for basket weaving. The heartwood of this tree will be a medium brown shade, while the sapwood has a pale brown color. The grain of this wood is reliably straight and free from knots. It has a medium-coarse texture. 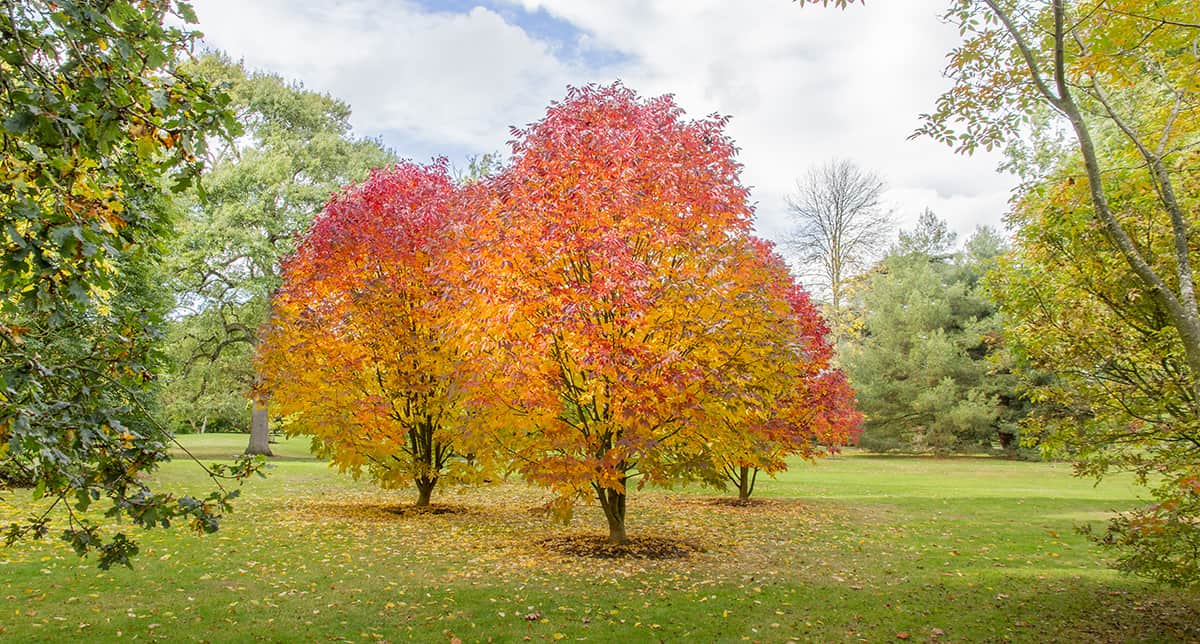 Also known as the American Ash tree, this species grows to heights of between 50 and 70 feet. It is native to northeastern North America and is one of the most common types of ash trees across this continent. It produces lumber that is exceptionally resistant to shock, which makes it ideal for use in baseball bats and tool handles.

The heartwood of White Ash is a medium brown color, while the sapwood can vary from beige to light brown. The wood has a medium to coarse texture, similar to oak, and it can have a curled grain, but it is most commonly straight.

This type of ash is among the most popular ash wood and, as such, is one of the most commercially valuable types of ash lumber. 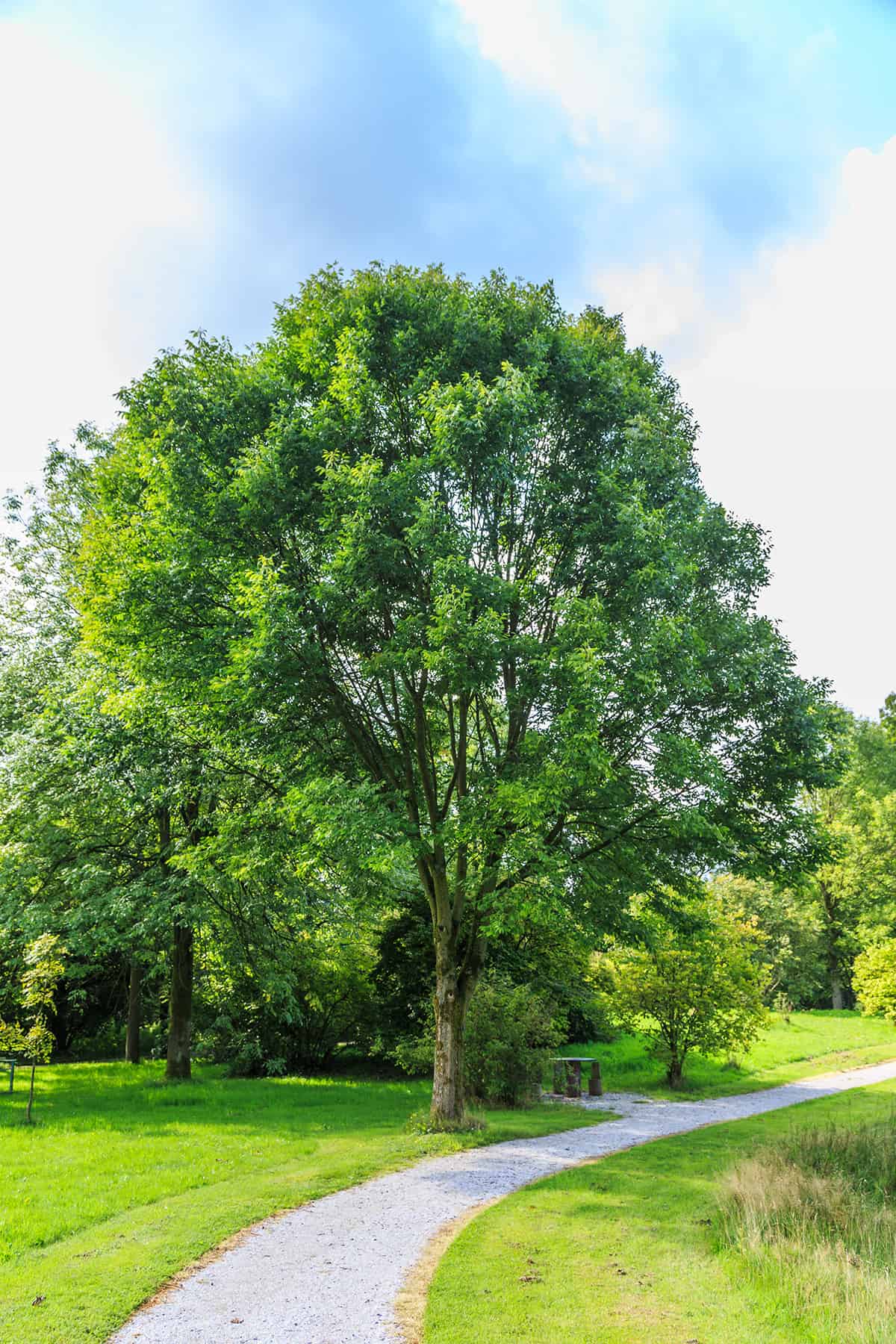 This tree also goes by the names Water Ash and Red Ash. It is native to central North America and typically grows to medium heights of between 40 and 80 feet. This tree can be seen in abundance across the United States and is known for its versatility when it comes to growing conditions.

The tree is able to thrive in a variety of challenging climates and varying soil types. Green ash lumber is very similar to white ash, and as such, it is often mistakenly sold as white ash, which is more expensive.

The two types of wood are difficult to distinguish between, but green ash tends to be paler in color than white ash, which seems counterintuitive considering the names of the trees. 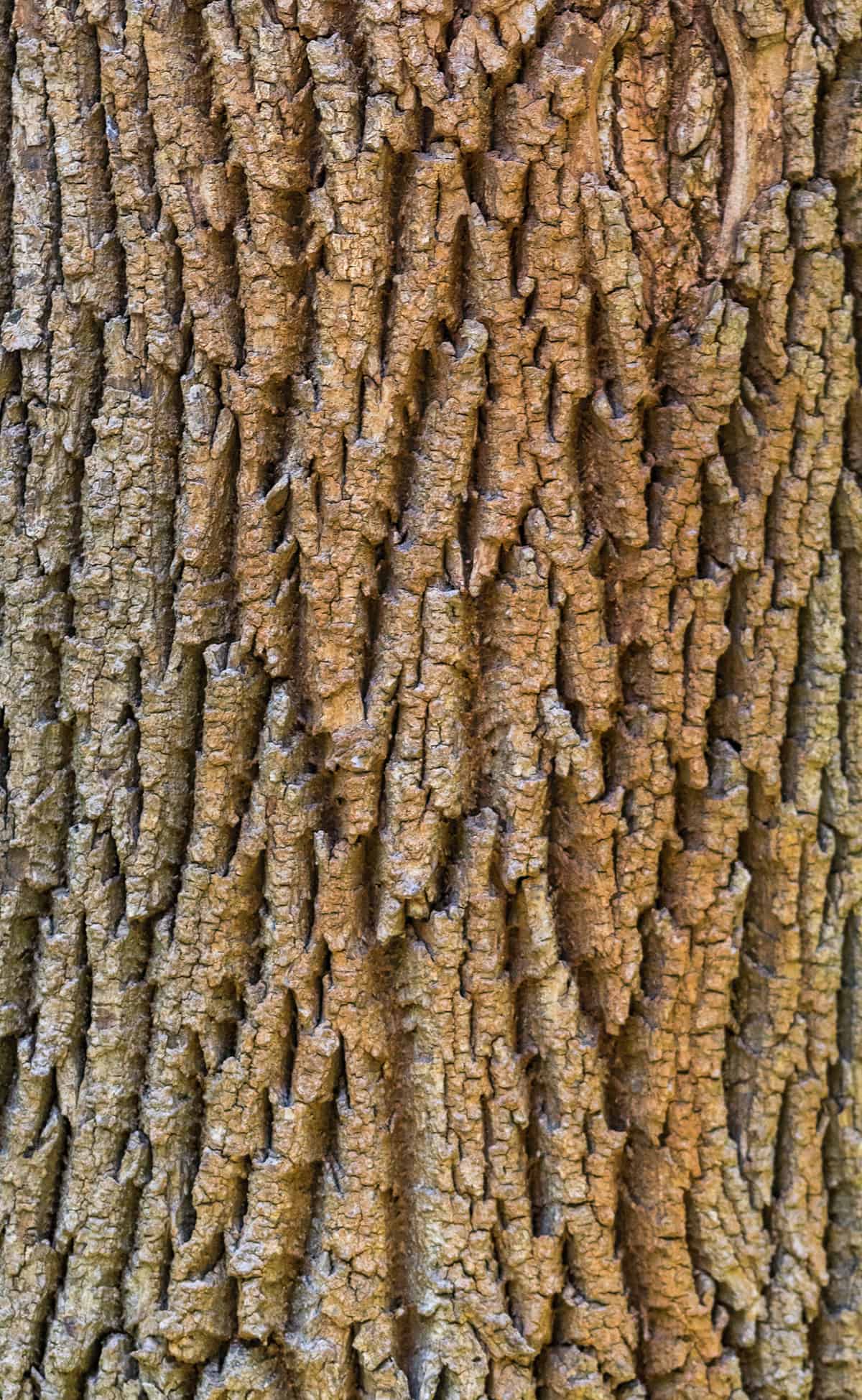 This tree is native to the United States, growing predominantly in the Midwest. It gets its name from the fact that the inner bark of the tree will turn blue when it is exposed to air. Historically, the tree was actually used in the process of producing blue dye, though it is no longer used for this purpose.

These trees can easily be spotted in the wild because they have an interesting diamond pattern on the bark of their trunks which is not seen on other types of ash.

The lumber from these trees is slightly less durable than white ash and is slightly darker in color. The texture of the wood is medium to coarse, and the grain is predominantly straight.

This species of ash can be grown as a small tree or a large shrub, reaching heights of between 8 and 20 feet. Predominantly due to its size, it is not valued for its lumber and instead is appreciated for its ornamental qualities. The plant produces clusters of white flowers which have a sweet and appealing smell.

This tree is also known as Florida Ash due to the regions where it grows. It can be identified by its pale gray-brown bark multi-stemmed habit. This tree thrives in swampy conditions but is not used for lumber since it produces wood that is weak. 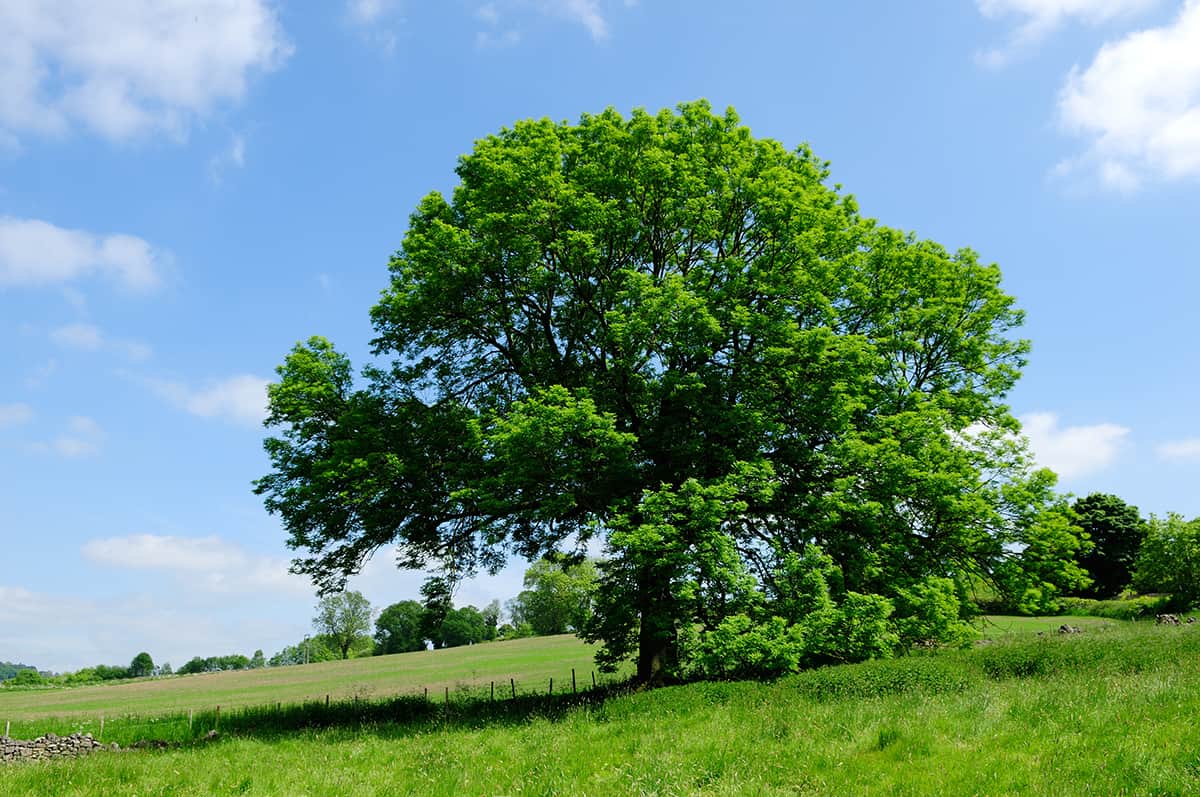 Also known as the Common Ash, this tree can be found growing in Europe, North America, and New Zealand, but it is native only to mainland Europe and the UK. These trees grow quickly and easily, which makes them a valuable source of lumber.

The wood from these trees is very popular due to its strength and durability, as well as its elasticity and appealing colors. The heartwood of this tree is a medium brown color with olive tones, while the sapwood is a creamy shade of beige to light brown. The grain pattern of this wood will be wide and open, with a texture that is coarse.

Also known as Littleleaf Ash, this can be grown as a small tree or large shrub. It will typically reach heights of between 10 and 20 feet and is predominantly found in Texas, Arizona, and New Mexico. Unlike most other types of ash, this is an evergreen species that retains its dark green leaves through winter to add color to the landscape. Due to its size, it is not used for lumber. 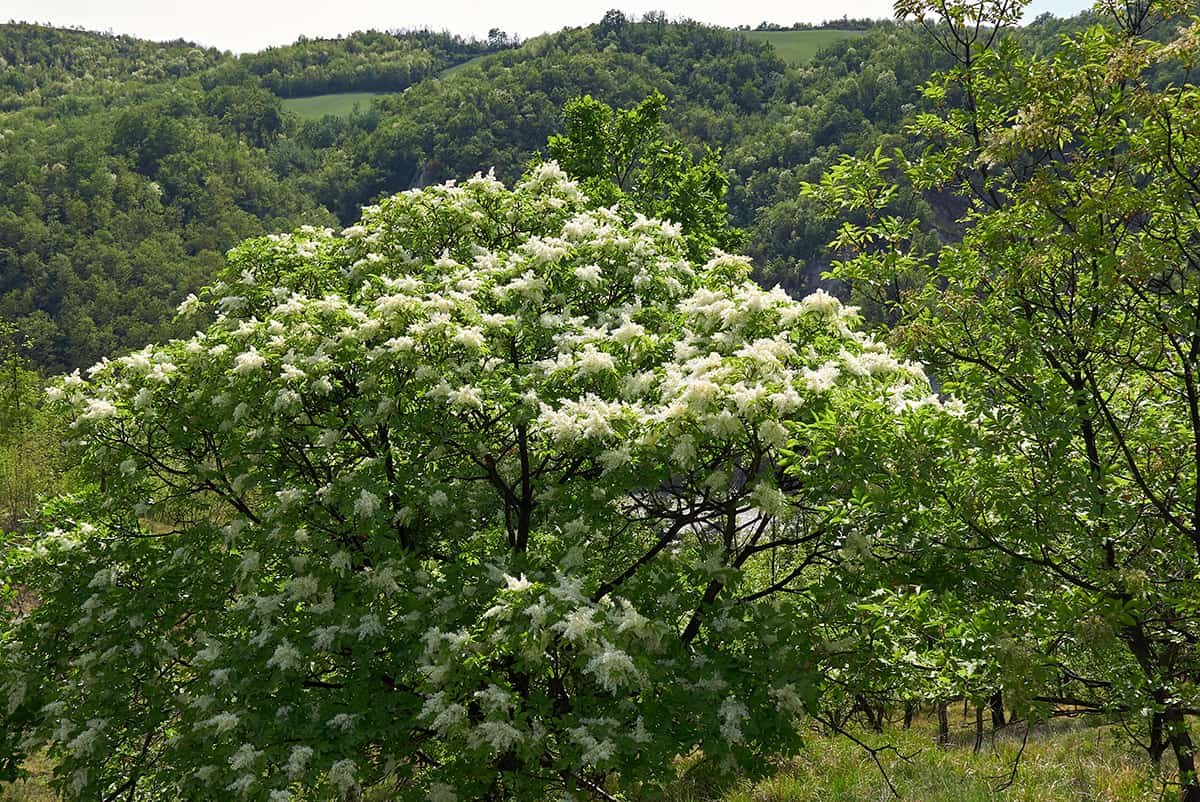 These ash trees are native to southern Europe and are also naturalized in Asia. They grow to heights of up to 80 feet and produce dark green leaves, which develop into a golden or purple color before they drop in fall.

They also produce attractive flowers which are dainty and cream in color. These trees are valued as an ornamental species and are not cultivated for their lumber. 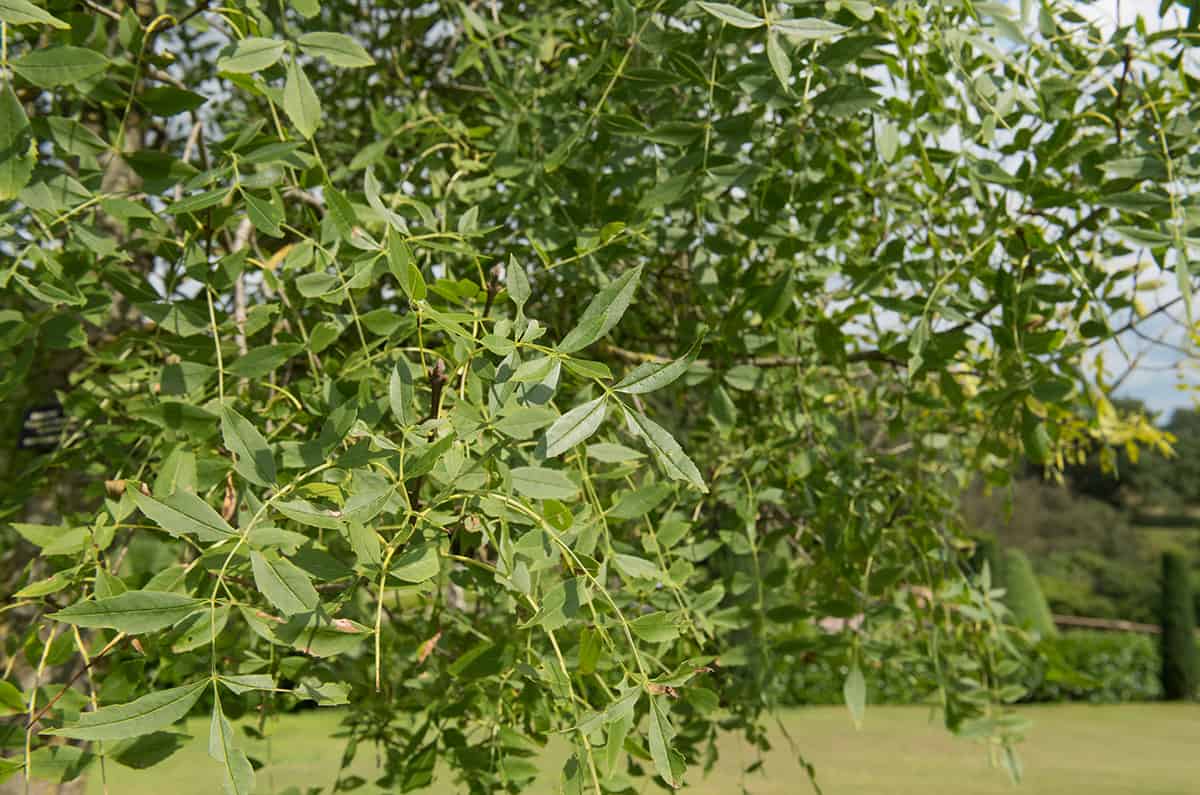 This tree is native to parts of Europe, Asia, and Africa and is named after its slender leaves, which can grow to over 9 inches long. These trees typically reach heights of between 60 and 90 feet. These are widely grown as landscape trees, appreciated for their stunning purple fall leaves and attractive pale gray bark. They are rarely cultivated for their lumber. 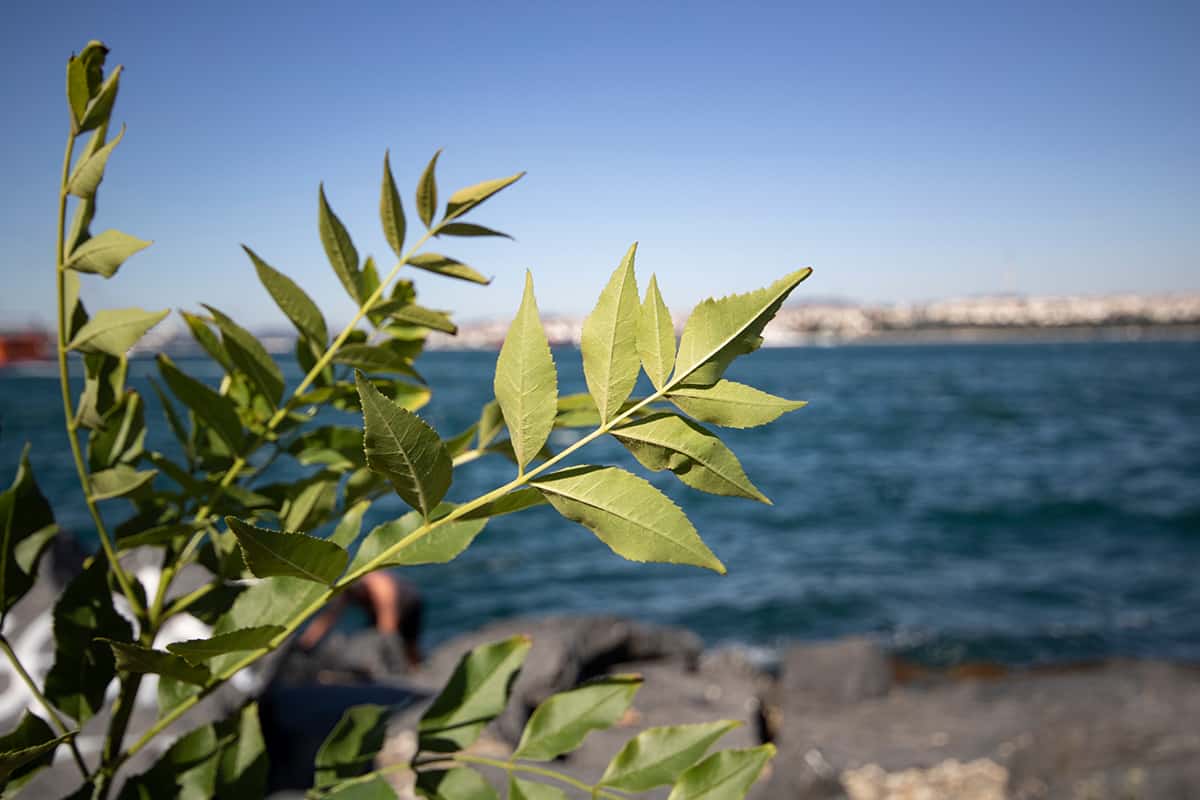 This tree is native to North America and grows to heights of up to 65 feet. It gets its name from the way the base of the trunk swells, especially in wet conditions, giving it a look similar to a pumpkin.

The wood from this tree is among the most affordable of all types of ash, which makes it extremely popular as a choice for hardwood flooring.

The heartwood of this ash is light to medium brown in color, while the sapwood is beige to light brown. It has a medium to coarse texture and a typically straight grain. 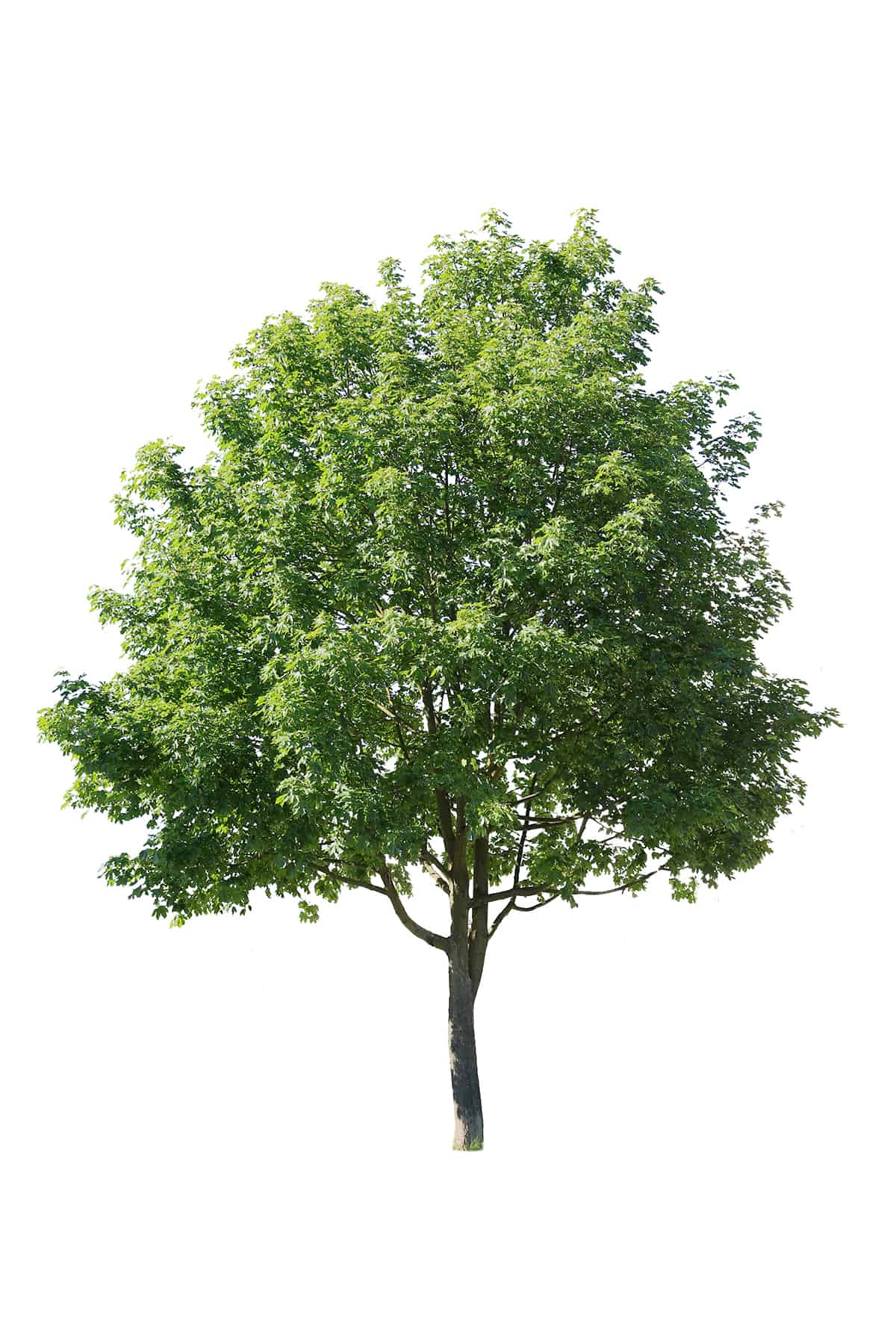 Also known as the Arizona Ash and the Desert Ash, this tree grows to heights of between 30 and 50 feet. It is native to North America and can thrive in both wet and dry conditions. The name of velvet ash comes from the smooth bark on young trees, which has a velvety texture. These trees grow slowly, and as such, they are not valued for their lumber.

This ash tree is named after the region it grows in, and it can also be found in Washington and California in the US, as well as British Columbia in Canada. This tree grows to heights of between 60 and 80 feet and shares many of the same characteristics as white ash.

It produces wood that is strong, resistant to shock, and easily worked, which makes it well suited to a wide range of uses. However, the small growing range of the tree means it is not widely distributed as lumber. Small scale manufacturers do use Oregon Ashwood in the production of tool handles and sports equipment, including baseball bats.