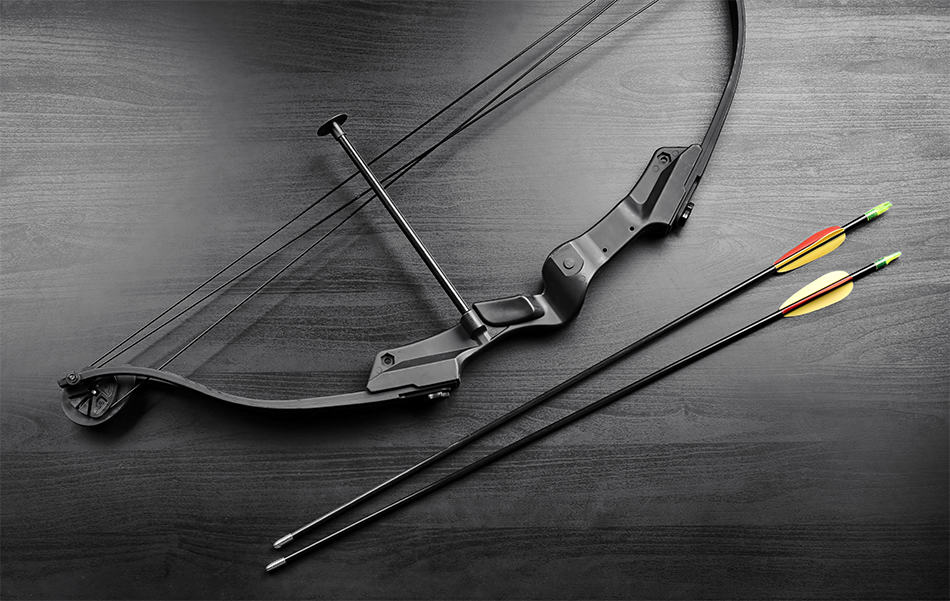 Learning about the equipment used in archery is essential to being successful in this sport, whether you are involved in recreational hunting purposes, competing as an athlete, or decorating items in houses. There are several types of bows that are used in archery, and here we discuss all of the parts of a bow found on a traditional bow and arrow as well as on a modern compound bow.

You’ll find this custom diagram hands-on to understand all the parts explained below.

The riser is the long vertical piece of a bow that is held in front of the body of the archer during use. It has a gently curving shape, curving away from the archer. The riser in a standard bow is traditionally made from wood but can also be made from a composite material. In modern compound bows, the riser is made from aluminum as standard, but high-end bows will utilize carbon fibers to construct the bow to make it more lightweight. The riser forms the central piece of the bow, which joins the upper and lower limbs. It features several important components of the bow, including the grip, the arrow shelf, and the sight window.

The grip of the bow is on the most curved portion of the riser, at around the midpoint. This is where the archer will hold onto the bow using one hand. To hold the bow correctly, your hand should gently hold onto the grip and move as high onto the grip as it can comfortably go. The thumb should be pointed at the target, while the fingers should rest on the front of the bow. Beginners might be tempted to wrap their fingers around the grip or squeeze it, but this is incorrect. The hand should feel fairly relaxed instead of tensed and will be supporting the bow. Grips come in various sizes, so when shopping for a bow, you’ll need to try out different grips to find the one which fits you best.

The arrow shelf is also known as the arrow rest, and the name is self-explanatory as this is the place where the arrow rests when it is being aimed. The arrow shelf can be built into the riser as a small ledge just above the grip, or it can be a separate piece of equipment that can be fixed onto the riser as an extension. If you are very selective about the size and design of your arrow shelf, it would be best to choose a bow that allows different types of arrow shelf to be fitted onto it so that you can customize your bow to your exact specifications.

A compound bow will typically have a type of arrow rest called a containment rest, which quite literally contains the arrow with a circular fitting. This is great for beginners as the containment rest holds the arrow in place so that the archer can focus their concentration on the target. For more experienced archers with compound bows, other types of arrow shelves to consider include the pressure rest, the shoot-through rest, and the drop-away rest.

The sight window is a small cutout in the riser, which the archer looks through when aiming the bow. Standard bows have one sight window, though some benefit from one on each side of the riser. Compound bows do now have sight windows and instead have separate sights which can be fitted onto the riser. Most commonly, compound bows will have a fixed pin sight, which can be set at different target lengths. This type of sight will have between three and five pins. For example, the top pin could be set at 20 yards, the second pin set at 30 yards, and so on. This will allow the archer a greater accuracy for aiming if they know the distance of their target.

Fixed pin sights are great for beginners because they can help to successfully achieve on-target shots with little experience. To figure out how far away your target is, you can buy a range finder that will measure the selected distance, though experienced archers will have learned to intuitively judge distances. Other types of sights for compound bows are pendulum pin sights and movable pin sights. Unlike fixed pin sights, both of these types just have one pin. They offer easy adjustment when you aren’t making shots of planned distances, but they will only help an archer perform well who is able to quite accurately judge the distance of a shot.

The limbs of a bow are what store the energy which is generated when a bowstring is pulled back, and it is this energy that will propel an arrow forward when the string is released. The limbs of more traditional bows will be made of wood, but they can also be made from metal or composite materials. Compound bows are made entirely of fiberglass, whereas wooden or metal bows might be laminated or coated in fiberglass. The limbs will be slightly flexible and come in pairs.

Compound bows can have different types of limbs, such as a solid limb (as opposed to a two-piece split limb) which will be made from one piece of fiberglass. Solid limbs tend to be less durable than split limbs and produce a greater level of hand shock. Another type of limb found on compound bows is parallel limbs, where the limbs are fixed horizontally at a parallel position to each other. This changes the traditional curved ‘D’ shape of a bow to more of an ‘E’ shape. Parallel limbs have an unusual look, but they produce less noise and less recoil when the bowstring is released.

The cam systems are what differentiate a compound bow from a traditional type of bow and are designed to transfer energy from the bowstring and store it until released. This allows the archer to make considerably more powerful shots than the weight they are holding back, and unlike traditional bows, which become harder to pull as you come closer to being fully drawn, the cams allow a compound bow to become easier to pull past a certain point.

The bowstring is the part of the bow which is drawn back behind the body of the archer and will catapult the arrow towards the target when released. Traditional bowstrings could be made from hemp, rawhide, linen, silk, or vegetable fibers, among other things. Ideally, a bowstring should be lightweight yet strong and durable. It should also be water-resistant. Most bowstrings today are man-made from fibers that are resistant to stretching out so that they do not lose their tension with use and time.

Bowstrings can be kept in good condition with routine maintenance involving rubbing the strings with wax-based around a silicone recipe. There are two main areas on a traditional bowstring, and these are the nocking point and the center serving. The nocking point will have metal crimped onto the string, often brass, and this serves as an indicator for where the string should be nocked. The center serving is the area on a bow where the arrow is held and ‘served’ when released. This area is located on the central part of the string, which lines up with the grip.

Compound bows tend to include additional features on the bowstring, such as speed nocks and mechanical releases. Speed nocks are small weights that are fitted to the bowstring, and these help to reduce vibrations of the string when the arrow is released. This has the advantage of returning the string to the cam groove more quickly, as well as reducing energy loss and resulting in an overall better speed rating for the bow.