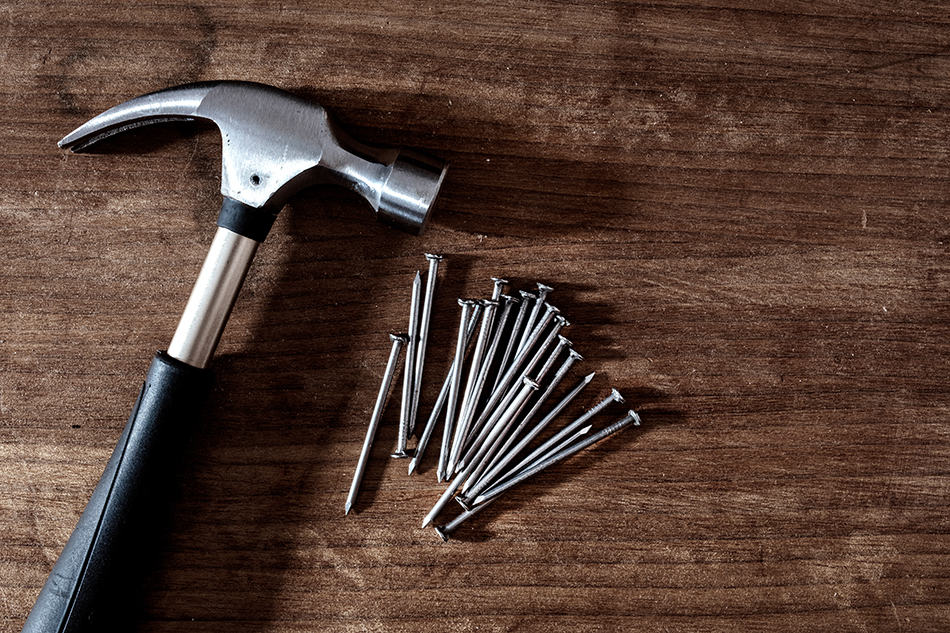 The hammer is one of the more common hand tool types. But despite that, not too many people are aware of its parts. While the use of this old hand tool is simple and straightforward, knowing its different parts can help in better utilizing it. Without further ado, below are the parts of a hammer as shown by the diagram and the explanation texts.

There are two types of hammer face: flat and milled. The former has a smooth surface, while the latter has a waffle-like surface with several four-sided pyramids. Flat-faced hammers are often seen in finishing types of the hammer, while mile-faced ones are often integrated into framing hammers. However, there are also high-end types of hammers that allow the face to be replaced.

Aside from the face, the claw is probably the most prominent part of a hammer. It is located opposite the face.

As you may have guessed, the claw is that part of a hammer acting as a pry bar. It is mainly used for extracting nails out of materials like wood. It can also be used in ripping wood apart. However, not all hammers have a claw-like the ball-peen hammer. In place of a claw, this type of hammer has a peen and is often used for metalworking.

Arguably the most critical part of the hammer, the handle, is what you hold on to when you use the hammer. Whether it’s striking nails, removing staples, or driving tent stakes, the handle lets you grip the hammer well enough to complete whatever task you need to do.

People tend to overlook the importance of the handle, preferring to focus on other parts of the hammer, particularly the face. But never fall for this mistake as the handle should be strong enough to withstand the impact of continuous strikes. Suffice to say, if a handle is made of poor-quality material, then there’s the risk of an accident waiting to happen.

Wood is the most common material used in handles. While it is generally durable and capable of absorbing impact, it isn’t the sturdiest of handle materials. It would also eventually break over time. Wood is also susceptible to rotting.

The next most commonly used material in handles is fiberglass. It is stronger than wood but surprisingly lighter.

It can also last longer than wood. Hammers made of fiberglass handles also tend to be more expensive than those made of wood.

The sturdiest material for a hammer handle is steel. It can withstand the test of time. However, the downsides are the price and weight, as steel is way heavier than fiberglass and wood.

This is the part of the hammer that links the face to the handle. It provides balance for the hammer. The length and diameter of the neck will vary depending on the kind of hammer you have.