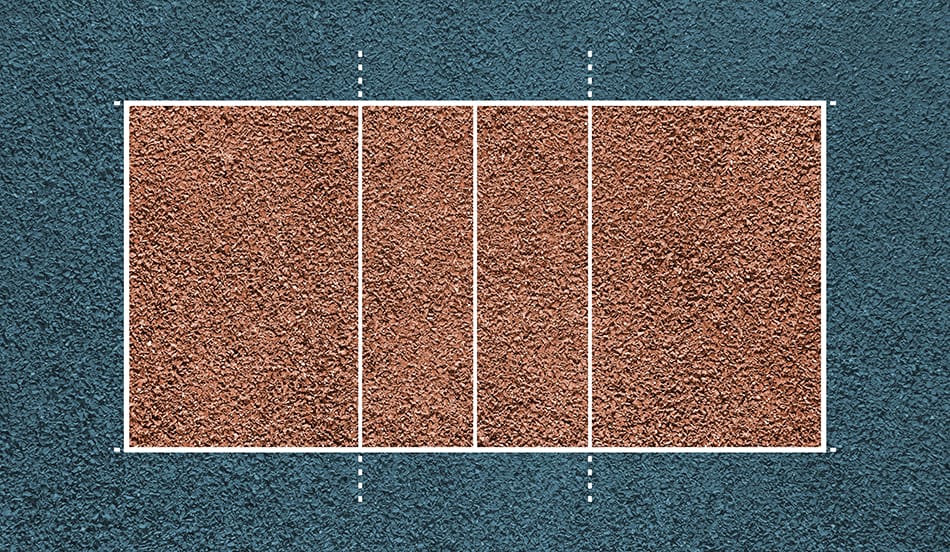 Volleyball is a popular team sport wherein two teams of six players compete with each other. In this sport, the players use their hands to bat the ball over a high net to the opponent’s court. To play this game effectively, there should be proper equipment, such as a playing court of the right size. So, what is the standard volleyball court dimension? 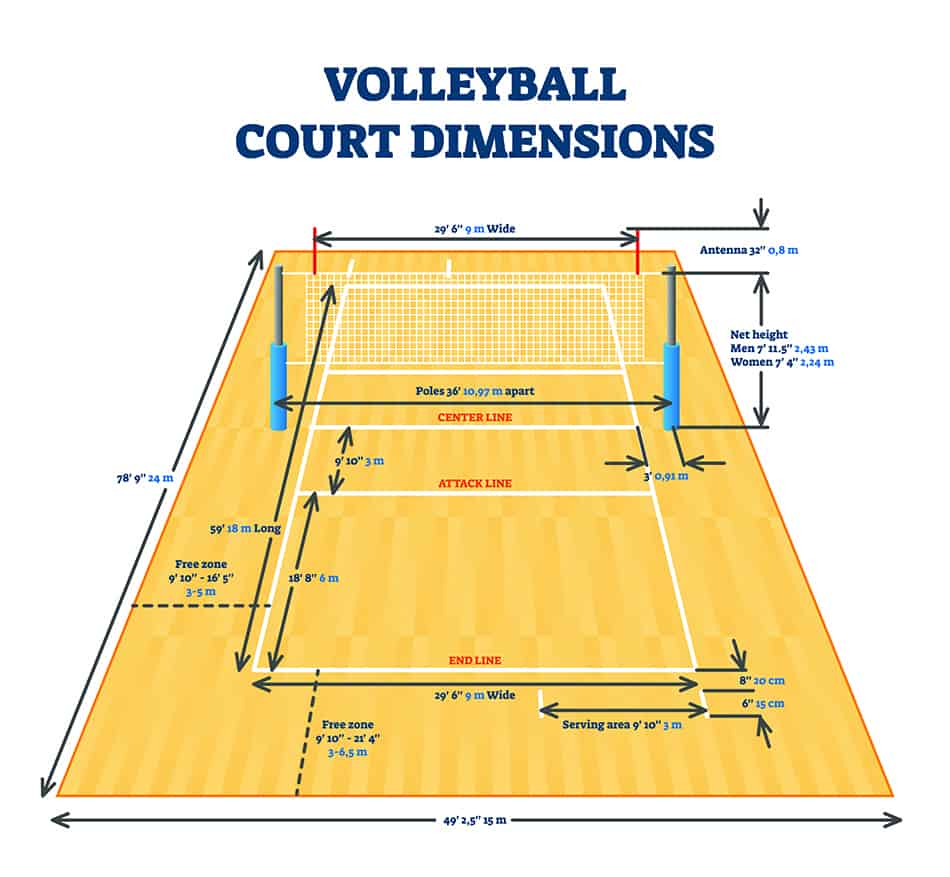 A volleyball court consists of a playing area and a safe space that surrounds it. The official dimension of the volleyball court in America is 29 feet 6 inches x 59 feet or 9 meters x 18 meters, and it is measured starting from the outer edge of the boundary lines. Additionally, the safe space on all the sides of the playing court is three meters or 10 feet in length.

The volleyball court dimension is the same for both men and women. The only difference is that the net of a men’s court is higher compared to the net of a women’s court.

If you are to compare this with a tennis court dimensions,

The playing surface of a volleyball court should be flat, horizontal, and even. Additionally, there should be no obstacles present in the playing court, plus the surface should not be greasy.

Indoor volleyball courts should be coated with lighter shades so that the ball can be easily identified.

The Different Lines of the Court

The center line divides the playing court into two halves. Its total spread should be shared by both sides of the court. Also, this line is placed underneath the net, and it stretches from one side line to another.

The attack line is placed three meters from the center line, and it runs parallel on each side of the volleyball court. Additionally, this line separates the frontcourt from the backcourt.

The front zone is the area between the center line and the attack line. This zone extends from the side lines to the free zone.

The service zone has an area of nine meters, and it is located behind the end lines, extending to the edge of the free zone. The sideways of this zone are restricted by two 15-cm lines, which are drawn 20 cm from the end line.

The substitution zone is begins at the attack lines and ends at the scorer’s table. Players who will enter the game should not go out of this zone, and substitution should be requested during a time-out or before a set starts.

The Libero replacement zone is located within the free zone, specifically at the side edges of the teams’ benches. This zone starts at the attack line until the end lines. Additionally, this zone is where Libero players enter so that they can replace the players in the back row.

The free zone is the area outside the playing court where players are still allowed to make occasional plays.

The penalty area has a dimension of one meter x one meter, and it has two chairs. Aside from that, it is located within the control area outside the end line, and it is restricted by a red line with a width of five cm.

The warm-up area has a dimension of three meters x three meters, and it is located outside the free zone, specifically at the corner of the teams’ benches. As its name implies, this area is where players can prepare before entering the playing court.

The Net and Poles

The volleyball net is the main element that separates the two teams. It is usually made with nylon with stiff headbands along its perimeters. Typically, the nylon netting has a mesh size of 10 cm.

Another vital part of a volleyball court is the antenna. It is a flexible rod placed on each side of the net. For its measurement, this rod is 1.8 meters long, and it has a diameter of about 10 mm.

Aside from those pieces of equipment, a volleyball court also needs poles to hold the net. The standard height of the poles is 2.55 meters, and they are placed about 0.50 to one meter outside the side lines.

The ball used in volleyball is typically made with leather or any synthetic material. Aside from that, it also weighs around nine to ten ounces with an air pressure of about 4.5 to six pounds. Plus, it also has a diameter of 20.7 to 21.3 cm and a circumference of 65 to 67 cm.