A door is a vital part of a home. In fact, no house or apartment is complete without interior and exterior doors. Every residential and commercial property features multiple entry doors with a range of functions and designs. While doors serve an important purpose, their style and design can affect the overall appearance of a property.

If you are thinking of building your own custom door, you must first get to know the exact components that a door consists of. But before we start with a definition of door parts, including frame, locks, and knobs, learn more about their fascinating history right here.

The very first doors were thought to have been found in tomb paintings that belonged to the Egyptian pharaohs some 4000 years ago. While it’s not known who invented the door, it is said to have originated in Egypt. False doors were initially used as wall decoration to mimic windows and were associated with an entry to the afterlife.

As time went on, the Romans used their creative minds and started designing functional doors that were usually made from bronze and used as folding, sliding, or double doors. Over the years the design of doors has evolved throughout kingdoms and now there are many different types of doors available in various styles.

Exterior doors are essential for security and weather protection purposes. These include front doors, garage doors, patio doors. Some exterior doors have stained glass on their upper or middle part, and they can be made from wood, metal, fiberglass, PVC, or aluminum.

The locks on exterior doors are sturdier, and there are built-in mechanisms to prevent tampering. An exterior door is almost always hinged to the inside rather than the outside, with a foam sealant around the frames to keep the drafts out.

Interior doors operate similarly to exterior ones, except that they are designed to suit the needs of the room they are installed in. For example, a bathroom door is usually made from PVC or fiberglass to prevent mold or condensation, while a bedroom door can be made from wood. Interior doors don’t have as many locks and hinges as exterior ones and they can be found in many different designs and styles.

Now that you’ve learned a little about where doors come from and the two main types of doors for your home, I have put together a simple list of the most common door parts to help you design your custom door.

Anatomy of a Door

This is the explanation of parts of a typical hinged door.

Top rail: this is the horizontal component that is located on the very top of the door

Freeze rail: this rail sits across between the door’s panels. It is often at eye level but not all doors have freeze rails.

Middle rail: it is positioned across the door’s middle section.

Stiles: the vertical parts that are positioned on the outer edge of a door are collectively referred to as stiles. The sides of the door, its hinge, and lock all have stiles.

Lock stile: sitting on the vertical corner of the door, the lock stile is located on the opposite side of the door hinge.

Panel/s: this can consist of one or several panels made from wood or glass to fill the frame next to the stiles.

Top mullion: the vertical feature of the door that acts as a divider between the panels on the very top. It is also referred to as the first mullion.

Lower or third mullion: the vertical part that acts as a division between the door panels below the middle mullion.

Molding: the decorative element used around the stiles’ edge as well as the rails and mullions.

Hinges: one or more hinges are used for securing the door to the frame while enabling it to swing.

Parts of a Door Frame

Head: this is the top horizontal part of the frame.

Sill: the lowest horizontal part of the frame. A sill gives extra strength to the frame and prevents dust or insects from entering. It also prevents the vertical elements from bending at the lower ends.

Horn: to be able to fix the frame in the wall opening, the horizontal horn at the top and bottom of the frame is used. The horn’s length can range from 10 to 15cm.

Holdfasts: the steel bars used to keep the frame in a sturdy position are the holdfasts. The bars are typically bent into z shapes and positioned on one end of the door’s frame while the other end is installed in the wall. The horizontal length of a holdfast is 20cm with a minimum of 3 bars needed to hold on each side of the door. It is important to know that you should paint the holdfasts before fixing them to the frame. Without these parts, the frame of the door may come loose during adverse weather conditions.

Rebate: this is the recess part of the door frame, where the shutter is fixed to via the hinges. The rebate should be cut 12mm wide with equal depth that matches the shutter’s thickness.

The door’s jamb and rebates work together as the vertical sides of the frame. If the rebates are made from stone, you’ll need to install two stones that are at different widths, with one fitted over the other in order for the shutter to fit correctly.

Threshold: this is a wooden component that’s fixed to the floor beneath the door’s frame. Sometimes, threshold and door sill are one in many doors.

Transom: lastly, the transom element is a horizontal part of the frame, which serves as a sub-divider for the door to open horizontally.

Parts of a Door’s Locking System

The lock: the internal part of a typical door lock consists of pins, barrel, and tumblers as its most common components.

Key: keys are used to join the tumblers with the pins in order to allow the barrel to easily maneuver and release the lock.

Latch or bolt: this is an important part of a door lock. The latch or bolt must be inserted into the mortise to provide adequate support to the door. Every time the door is unlocked, the latch retracts so the door can open. The door’s lock is aligned to a bolt inside the door. This piece, which is almost always made of metal, extends from the door into its frame to keep it closed.

Spring bolt: this is a type of bolt that’s held in place using a spring clip, which is flattened to unlock the bolt upon its release and snap into a locked position.

Box plate: when the bolt extends from its cylinder into the square-shaped hole, it is referred to as the box. This component is designed to secure the bolt in place within the frame of the door when the lock is engaged.

There is also an additional deadbolt system that’s usually installed in exterior doors for additional security. A key is required to retract the bolt from the frame.

Metal plate: the metal plate is attached to the door frame and is hit by the latch every time the door closes. It’s also known as the strike plate, and its purpose is to guide the bolt into the box from the cylinder of the frame for extra reinforcement to the lock mechanism.

Mortice: this is the hole drilled into the door frame via the strike plate that holds the latch in place when the door is shut.

Trim: this is the decorative plate that’s also called a rose and attached to the door under the lever or knob. The lock you choose will determine the style and finish of the trim so make sure you take your home’s style into consideration before choosing the right trim.

Parts of a Door Knob

Knob: the actual knob is attached to the reverse side of the lock to allow the door to be locked and unlocked manually. There is no need to use a key.

The door knob’s hardware includes metal pieces, such as screws that can hold the knob securely on the door. 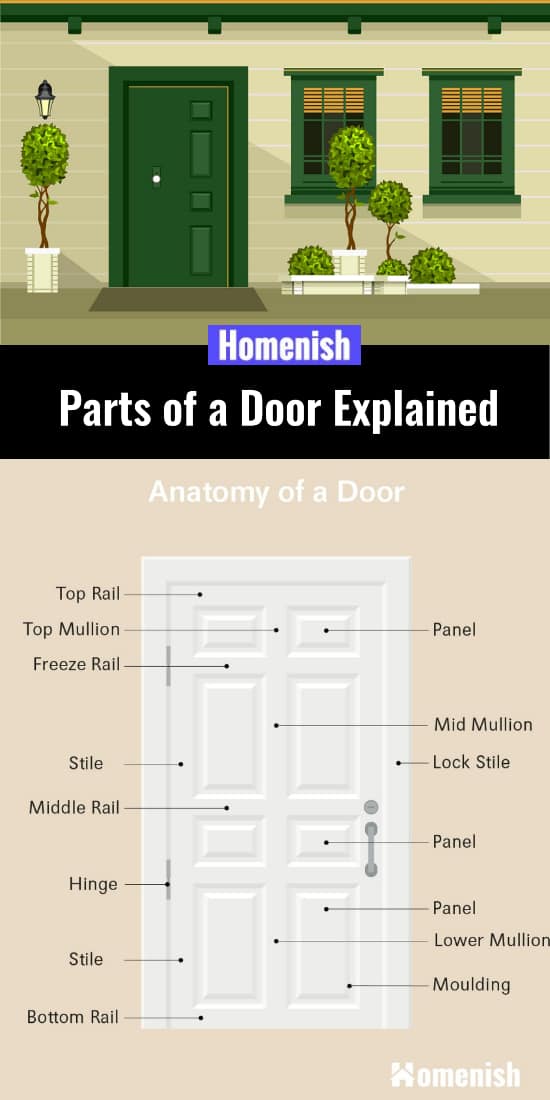