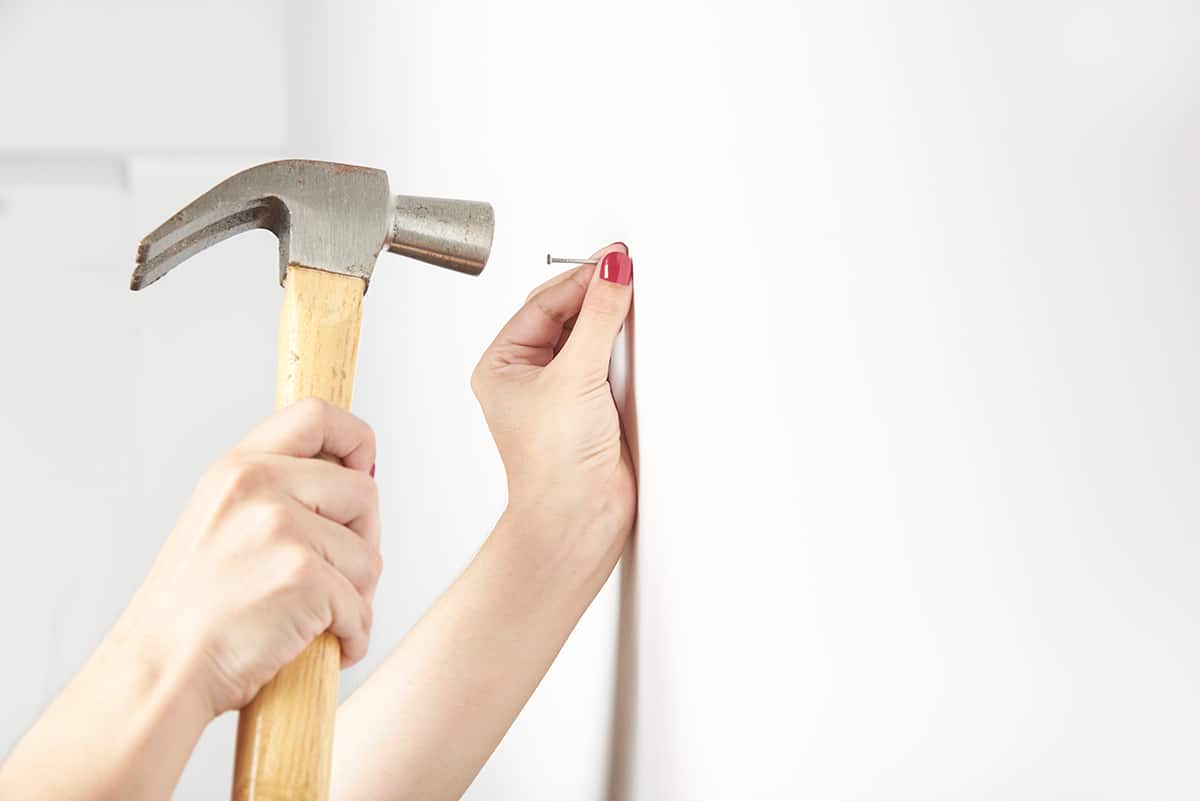 When framing interior walls, you need to choose the right size nails to ensure the framing is strong and that your job isn’t too physically strenuous. This means you will want a nail that is large enough to be sturdy and robust while being small enough that it isn’t difficult to drive into the wood. You should also stay away from nails that are too bulky because they can split the wood upon entry, rendering your framing weak and unsuitable.

Let’s look at the most common types of nails used in framing that will result in a professional finish for your project. 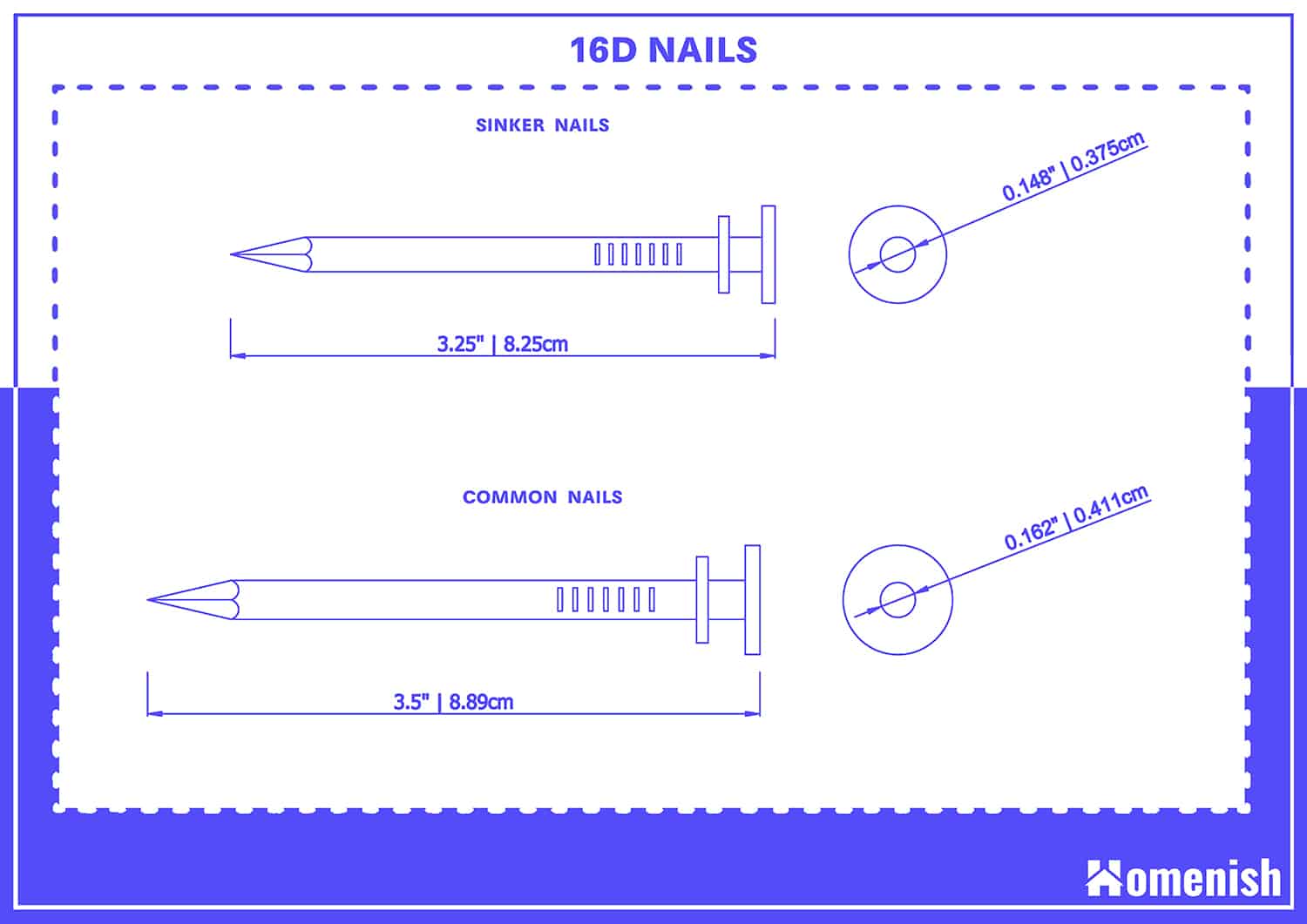 These nails are also known as ’16 penny’ nails, with the ‘d’ in their name being an old abbreviation for the measurement of ‘penny.’ This way of quantifying measurements is no longer used, but the names for nails have stuck. 16d is the size of the nail most commonly used for framing. These nails are great for joining 2×4 lumber, as well as fixing joist hangers and fastening rim joists and wall plates.

Among 16d size nails, there are two types; sinkers and common nails. Sinker nails are the favored type of nail for fixing non-load bearing framing because they have a coating on them that makes them glide more effortlessly into the wood. The coating will be made from epoxy, concrete, or vinyl, giving them a smooth surface that slides through material more readily than standard nails. This coating also protects the nails from rusting, which can be useful in projects where the framing is likely to encounter high levels of moisture.

Sinker nails also have a textured head which prevents tools from slipping when hammering the nails in, potentially preventing accidents and damage to the frame. This makes them both safer and more efficient nails compared with the common 16d nail.

The sinker nail has slightly different measurements from the common nail. It has a diameter of 0.148 inches compared to the common nail’s diameter of 0.162 inches, making it a sleeker nail, again resulting in more effortless entry through the wood. The lengths of these two types of 16d nails are also different. The 16d sinker nails have a length of three and a quarter inches, while the common 16d nails have a slightly longer length of three and a half inches.

Although 16d common nails are chunkier and therefore require slightly more effort to insert into framing, they are the preferred nail for framing load-bearing walls, as they are stronger and more robust. Despite 16d nails having the same name, the sinker and common nails of this size should not be used interchangeably because they have different measurements. They are both useful in framing; however, the larger and more reliable common 16d nails are required by building code for many types of framing. Typically you can use 16d sinker nails for framing stud walls to a wall plate. 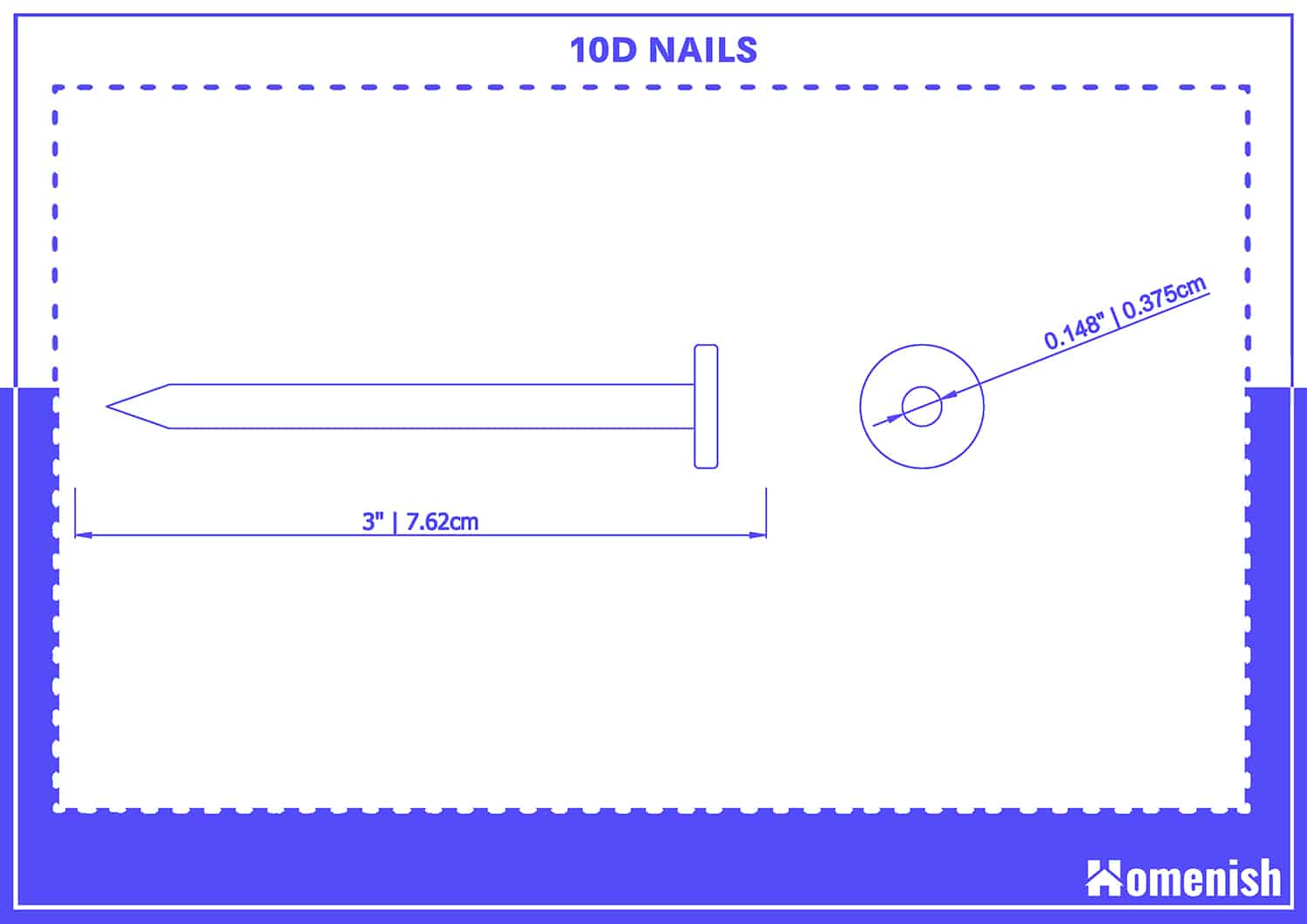 If a project states that a 10d common nail is required, you can usually use a 16d sinker nail instead, and this will be perfectly acceptable. Common 10d nails are good for fixing board to framing because they have a shorter length which is better suited to uses that do not require deep penetration of the material. 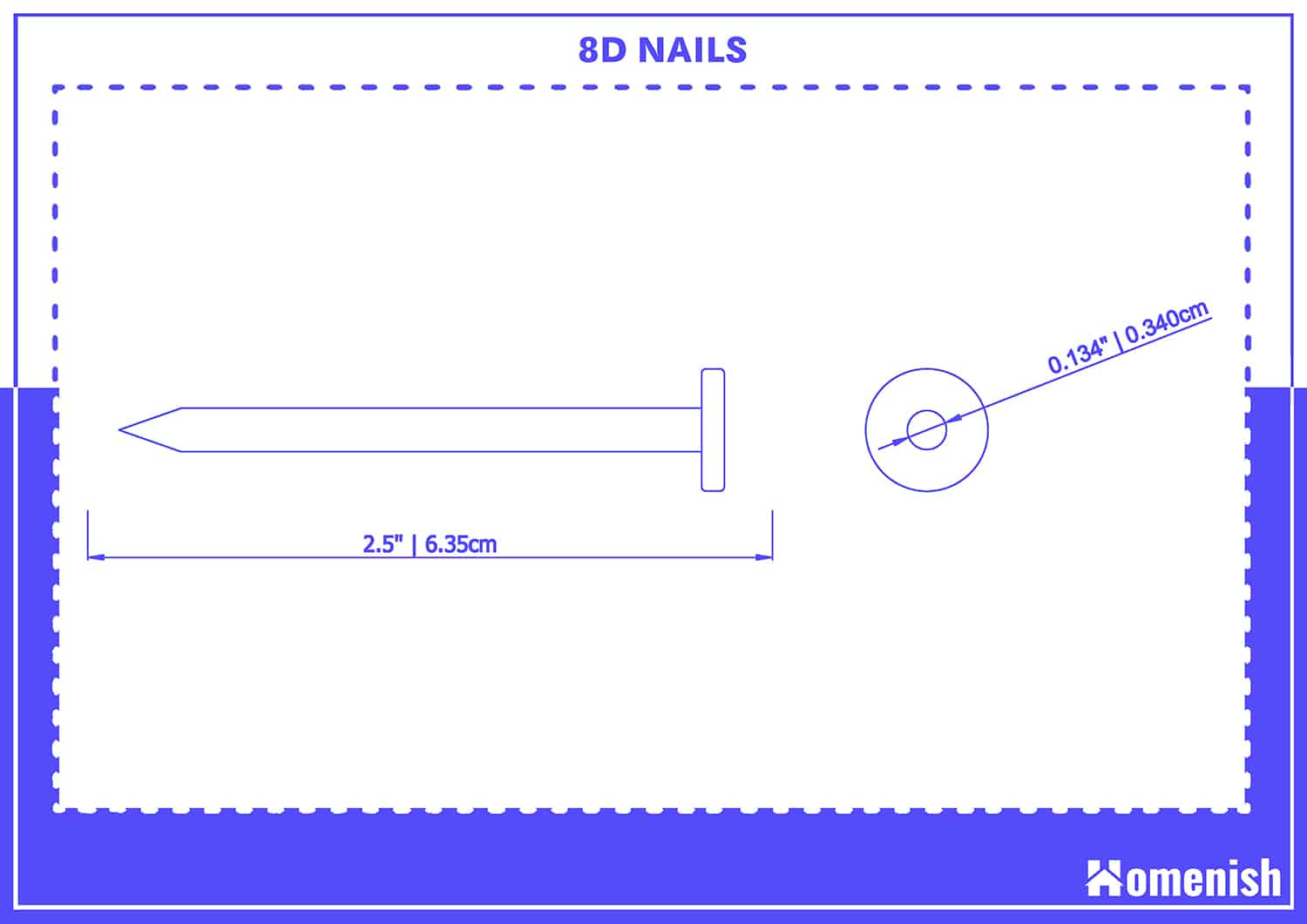 8d nails, or 8 penny nails, are most frequently found in common types. The common 8d nail has a length of two and a half inches and a diameter of 0.134 inches, making it a good nail to use for shallower applications where a large nail isn’t necessary. This can include framing tasks such as fixing subflooring in place and attaching sheathing and furring strips.

8d nails do also come in a sinker format, but these are not as widely available. They have a more narrow diameter measurement than their common counterparts and have a coating to aid with easier insertion.

You can find the comparisons of different types of nails with specific dimensions as illustrated by the diagram below. 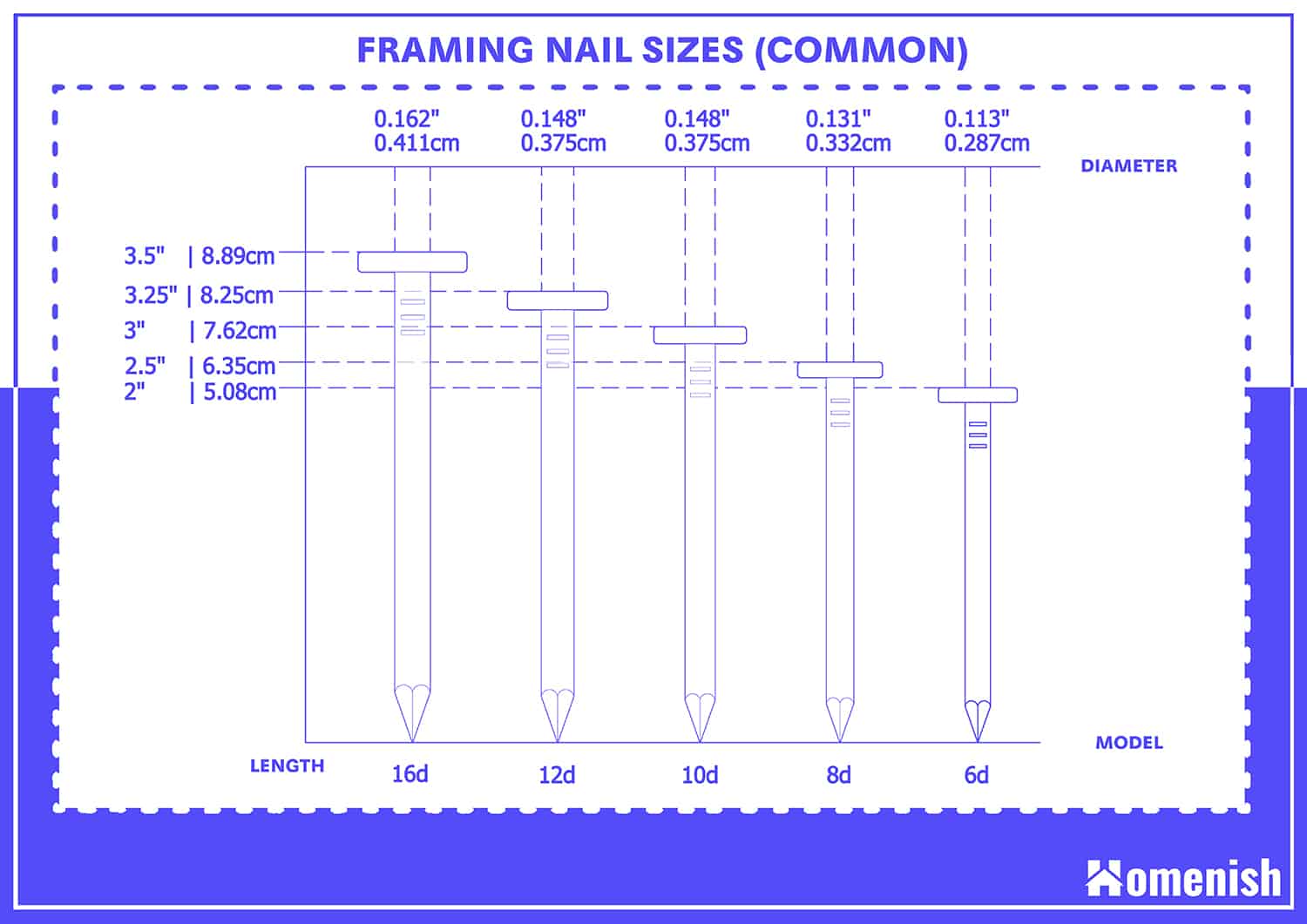 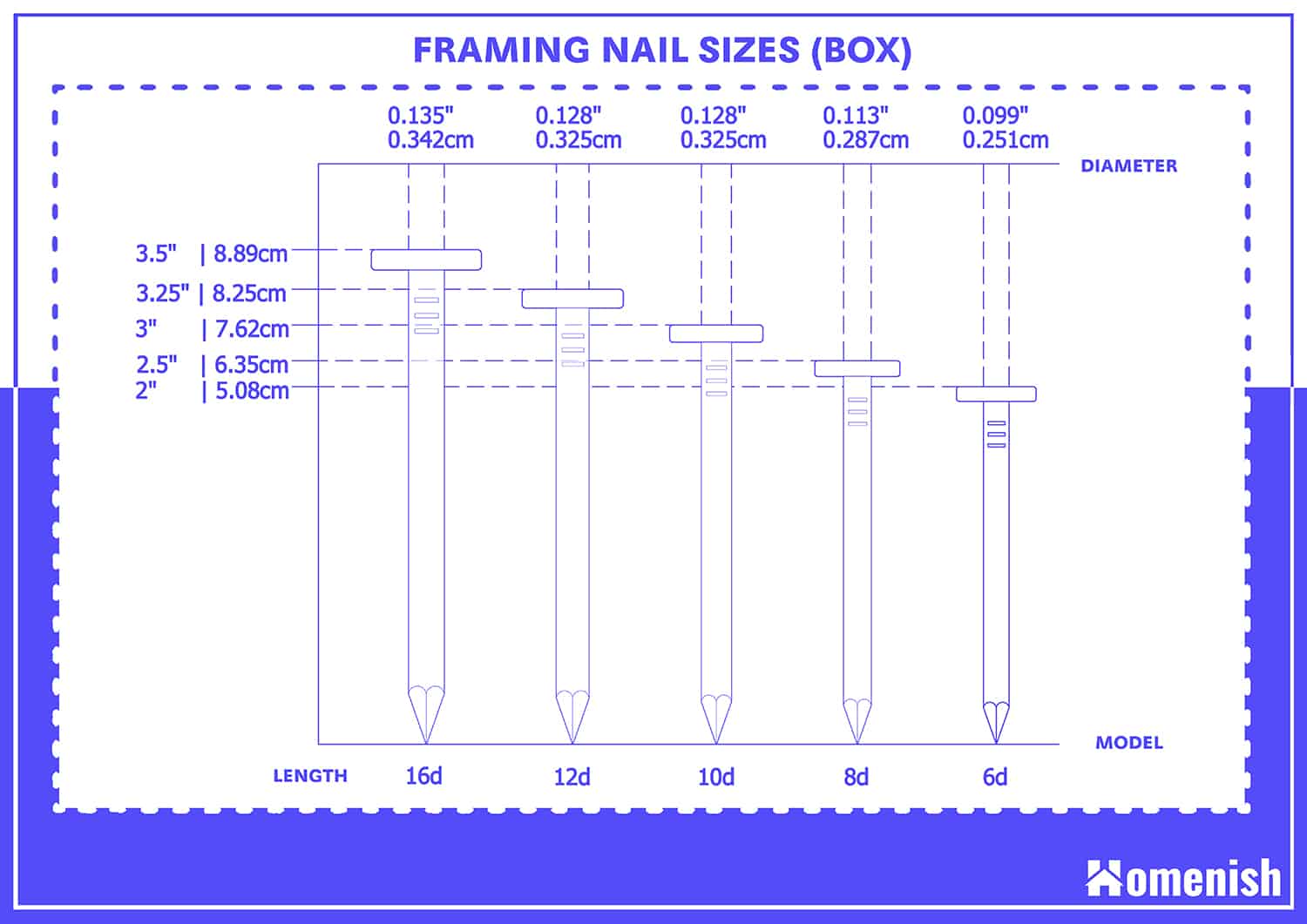 As well as choosing the correct nail size for your framing needs, you’ll also need to ensure you select the correct tool to insert them. Your options for driving nails into framing are a nail gun or a hammer, and while both of these are suitable tools for the job, they do have advantages and disadvantages which can make them more appropriate for certain applications and situations. Consider these pros and cons to judge which would be the best tool for applying your framing nails. 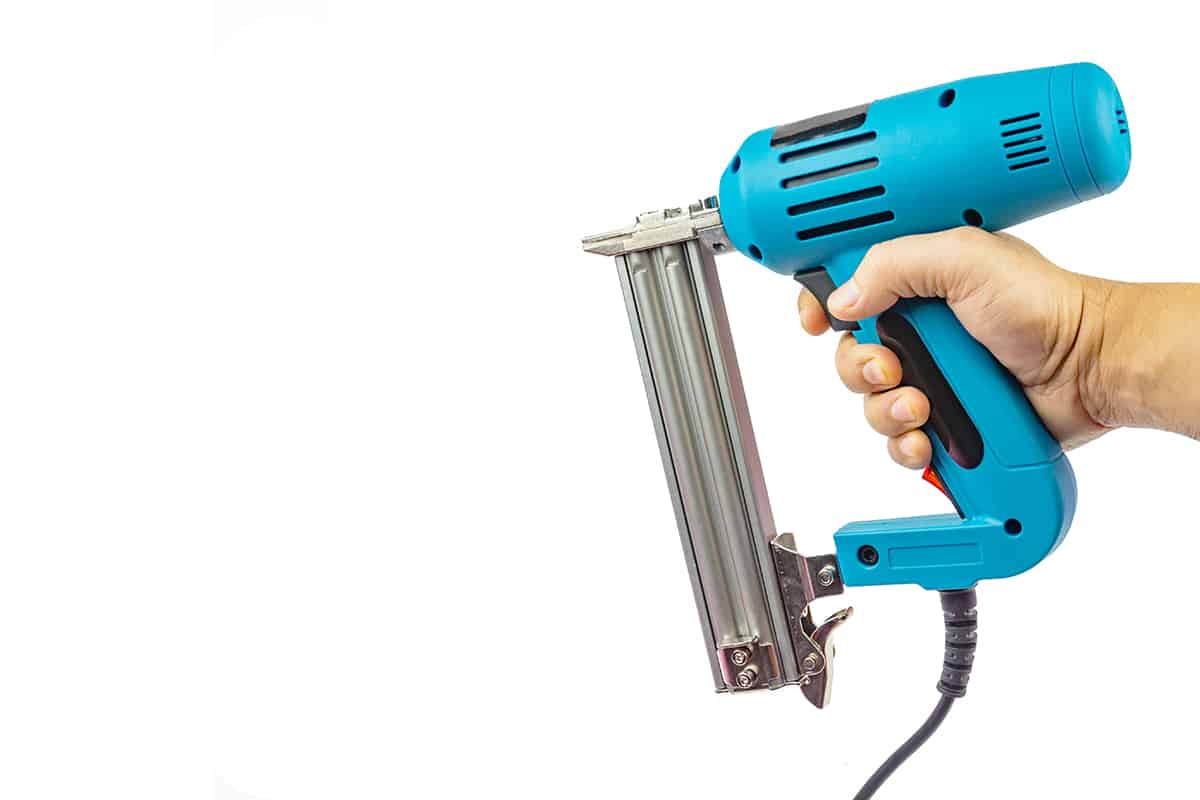 Nail guns work by shooting a nail at high speed into your chosen material- typically wood. They do this by utilizing battery or electric power, which gives them a lot of power without requiring much effort from the user. You can insert nails with a nail gun using just the push of a button.

Nail guns are incredibly efficient, inserting nails at great force and at high speed, making them excellent for jobs where a large number of nails need to be inserted in succession.

Nail guns only require one hand, freeing up the user’s other hand to hold wood or hardware in place.

Nail guns carry nails inside the tool, so the user won’t need to carry nails around on their person.

Nail guns are restricted by cords plugged into a power outlet or a battery that needs to be recharged, which can make them inconvenient.

Nail guns tend to be weighty, which can cause stress on wrist joints if you hold them for long periods of time.

The depth at which a nail gun inserts a nail into wood won’t be perfect every time as you cannot control this factor as well as you can with a hammer. 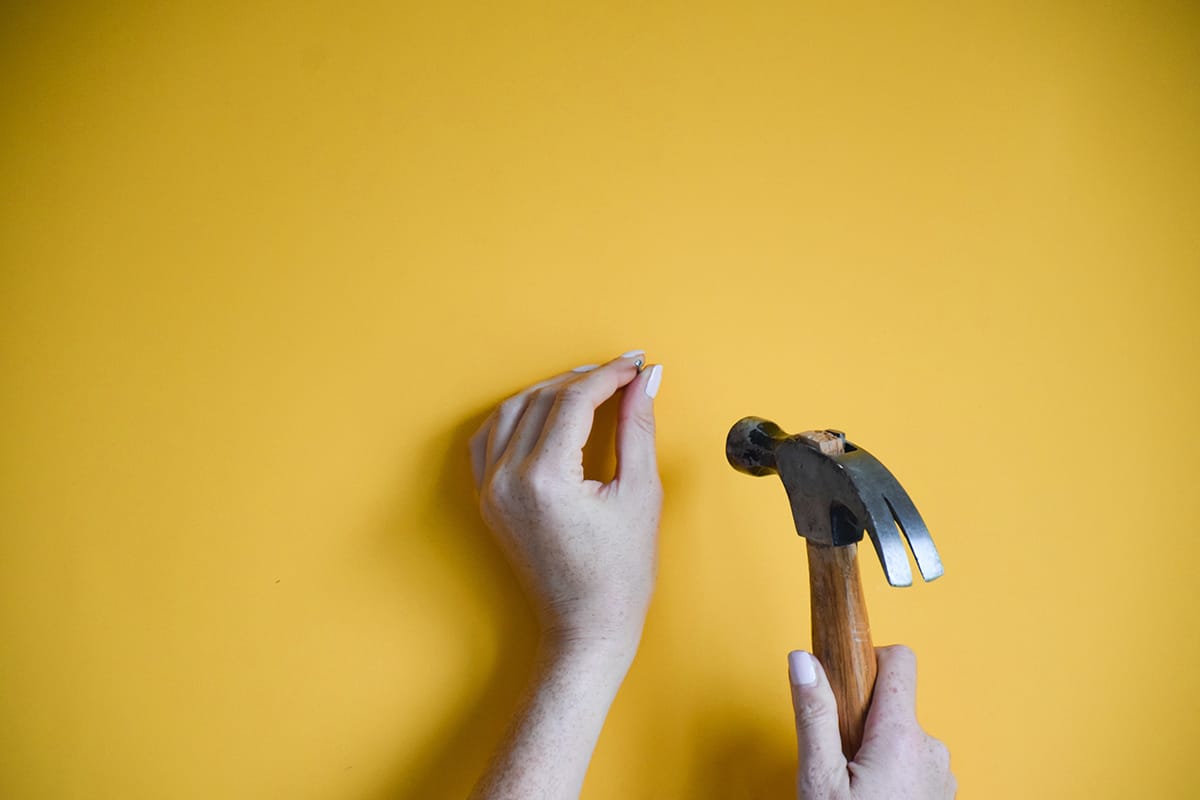 Hammers are relatively small and lightweight, making them easy to carry around in a tool belt.

Using a hammer to insert a nail gives you greater precision, allowing you to adjust the depth of insertion until it is perfect.

Using a hammer requires two hands; one to hold the nail in place and one to swing the hammer. This can be problematic if you need to hold other materials in place at the same time.

If you’re using a hammer, you’ll need to carry tubs of nails around with you, which typically results in more dropped and lost nails.

Hammers are slower at inserting nails compared with a nail gun, so they can greatly reduce the speed of progress on a project.

Hammers require strength and effort to use them, so you are likely to experience fatigue sooner than if you were using a nail gun.