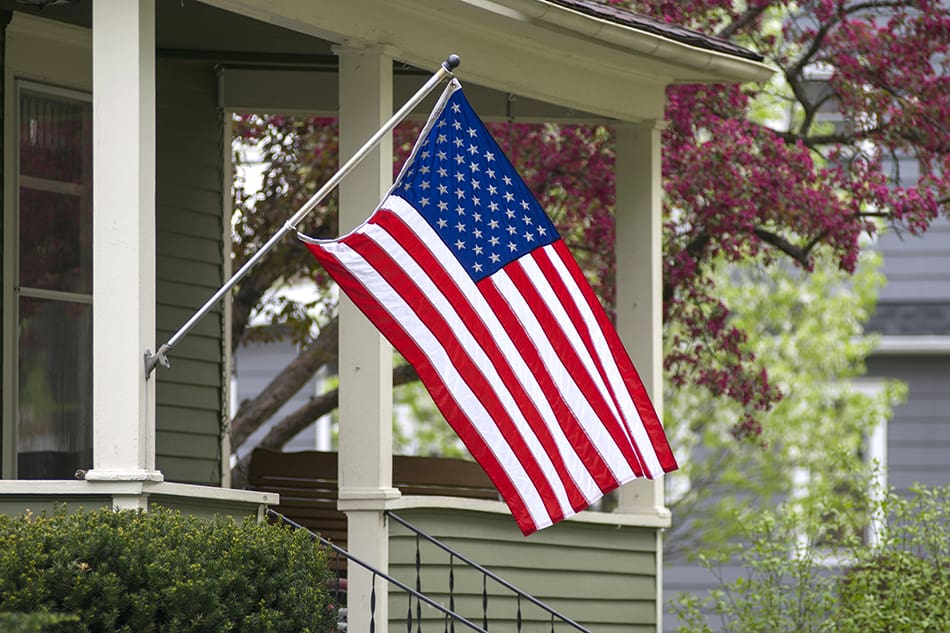 Our country’s flag is one of our nation’s most prized symbols. Not only does it represent the pride that every American feels for their country, but its color combinations are now deemed to represent the United States of America (and the values it stands for) all around the world.

Because of this, many of us love to display the flag in our backyards and roofs. This is particularly popular around Independence Day – but it is becoming increasingly common to do this all year long. Either way, it is important not to leave flag placement as an afterthought: because of the strong symbolism attached to it, you will want to make sure it is displayed in a way that shows the respect you have for it.

This means it needs to be securely attached where it could get damaged. However, did you know that there are many more rules regarding flag etiquette?

Flag etiquette is a set of rules that oversee the way a flag should be treated in order to display respect for the nation it represents. This includes how it is exhibited, but also how it should be handled and even disposed of.

For government agencies and military buildings, flag etiquette can have profound political implications: for example, when multiple country’s flags are displayed, their position can indicate whether the other countries are equal allies, enemies, or occupied territories.

For regular civilian households, it is unlikely that a war would be started over an accidental flag mishap. Yet, the U.S. Congress still provides a set of recommendations listed in the U.S. Flag Code, which was established in 1942.

Where and How to Hang a Flag

The rules included in the Flag Code will vary a little depending on whether you are hanging it from a staff, pole, or directly on your wall. Before we dive into those details, we should look at the universal rules that need to be respected.

First, the flag should always be in good condition: clean, brightly colored, and without any tattered or worn-down sections. It is also important to place it somewhere high enough to keep it away from the ground or even from splashed mud on a rainy day. 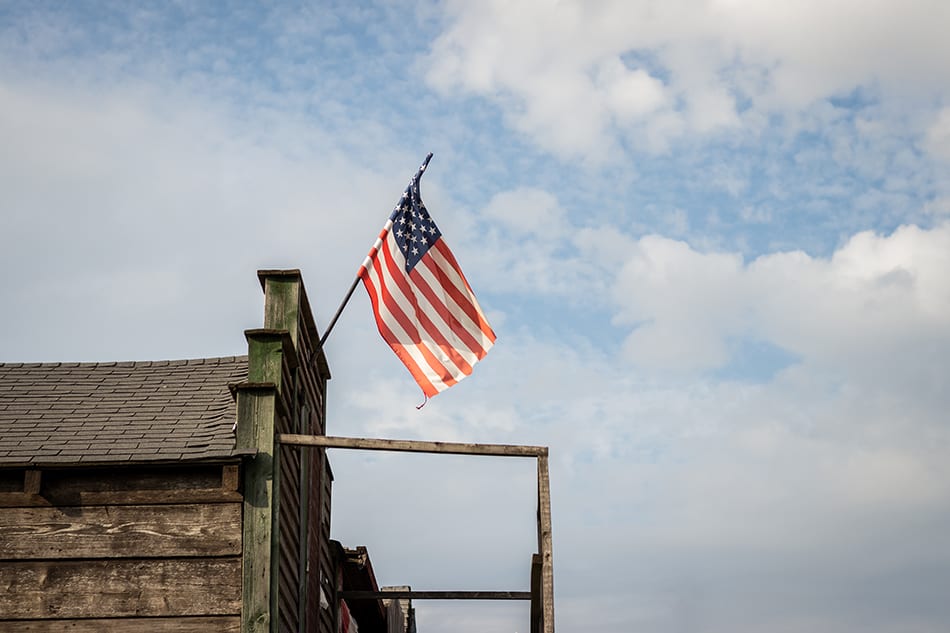 If you are placing the flag on a staff or flagpole, there are additional rules you must follow. First, you should only fly the flag between sunrise and sundown unless you shine a light directly to it. The idea here is not to let the flag fly in the dark.

You may also need to remove the flag or guard it on rainy days to prevent it from getting dirty.

The pole or staff you use may be placed vertically in the middle of your backyard or projecting from a windowsill or balcony.

If you are using a standalone flag pole, make sure it is far away from any nearby trees, electricity wires, or light poles that it would brush against them

If you are going for the second option, it is best if you secure the projecting pole from the roof or the top floor of the house. In addition, the Union section (that is, the blue section with white stars) should be on top. Naturally, you will also want to ensure the flag pole is properly secured. A flag bracket is a good way to achieve this since it is specially designed to balance the weight without letting it fall.

Flat Against a Wall 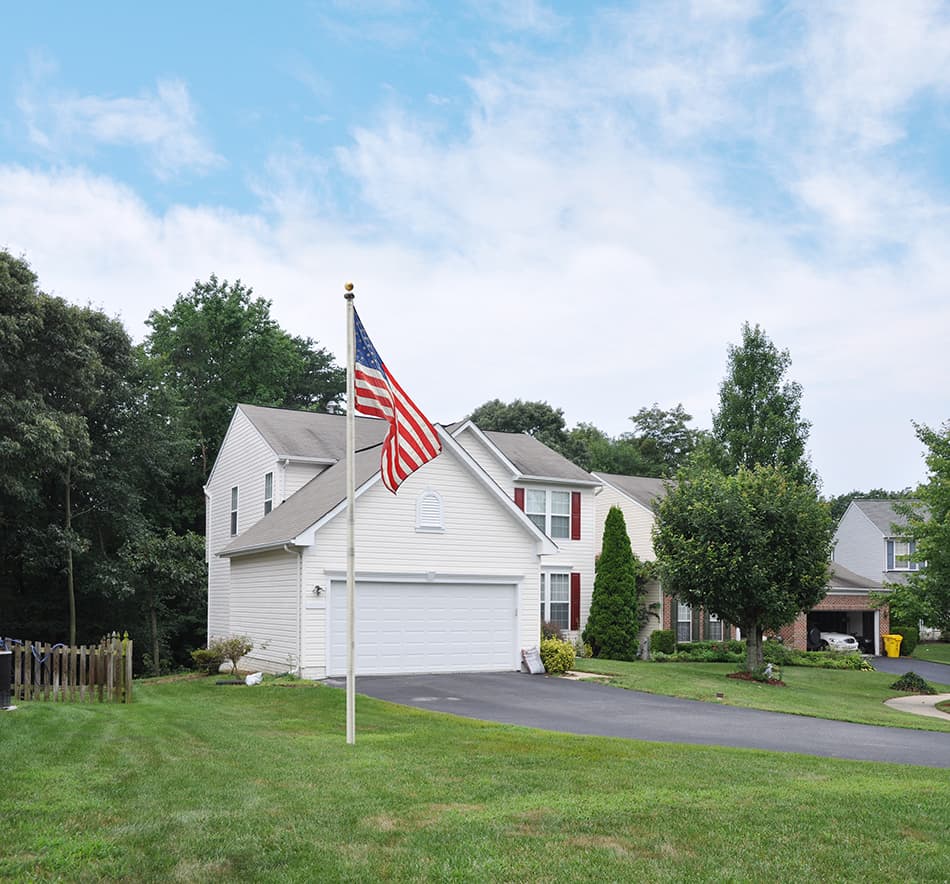 A flag can also be displayed flat against a wall, both indoors and outdoors. In both cases, ensure that you place it high above everything, so it doesn’t touch the ground or floor below.

If you are hanging it indoors, it is also best if it gets its own wall. That way, you will minimize the chance of having any possibly disrespectful decorations next to it. Make sure the bottom of the flag is not brushing against any nearby shelves or bookcases.

When displaying your flag outdoors, you can choose to do it horizontally or vertically. In these cases, make sure it’s facing the right direction:

Any other position would amount to flying it upside down, which is a huge no-no.

Using Bunting as a Décor Accent

Bunting is any decorative item made of fabric or any other material that imitates fabric, which includes the colors of the flag. Many of these are often hung from balconies, fences, and windowsills during Independence Day events or special parades.

When placing flag bunting, make sure the blue stripe is on top.

Other Things to Consider

If you are choosing to keep your flag up throughout the year, you may also run into other circumstances where you will need to be mindful of flag etiquette.

If you are also flying your state’s or city’s flag on a pole or flagstaff, make sure these poles are lower than the one used by the American Flag.

If these flags are hanging from a wall, they should be on the left of the flag.

Removing and Disposing of a Damaged Flag

If you ever need to remove the flag (for example, if you know there is inclement weather coming), make sure to remove it respectfully and to fold it nicely.

When a flag is too old, its edges have frayed, or the colors have faded, you will need to replace it. Don’t simply toss your old flag in the garbage, however. According to the flag code, old flags should be respectfully incinerated.

Flying It at Half-Staff

Flags are flown at half-staff on Memorial Day or on any other day marked by the President (for example, following a national disaster).

Choosing to fly the country’s flag from your home or backyard is a great way to express your pride in the country. The rules listed above are meant to be only guidelines. However, respecting them is a great way of honoring the military personnel and the first responders (including policemen and firefighters) who have been defending the flag for centuries. 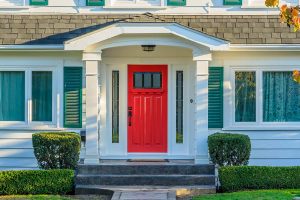