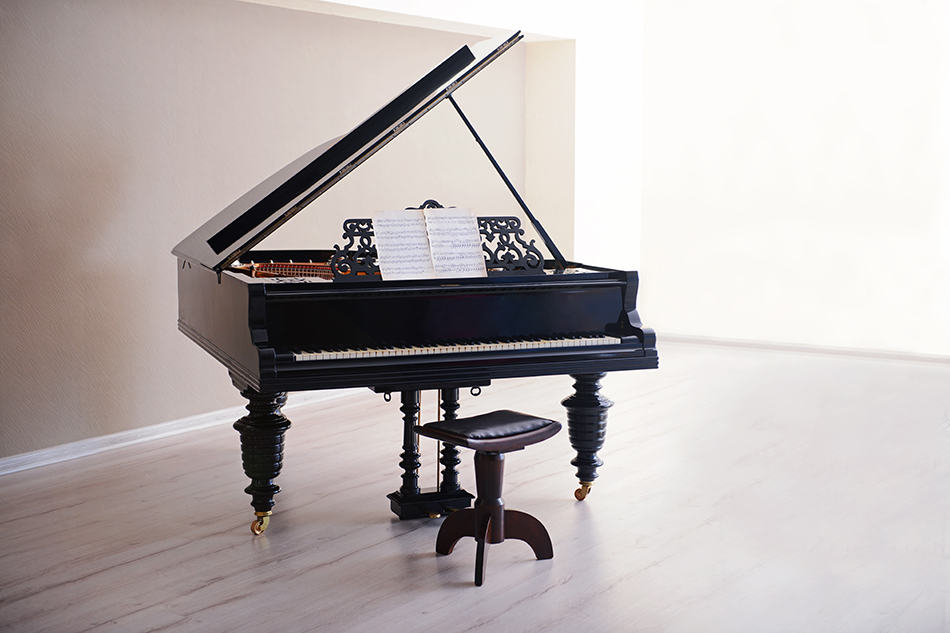 The piano is one of the more popular and iconic musical instruments in the world. It is also a luxurious decorative item in expensive houses, villas, or castles. It has been around for quite some time, too. Italian builder and musician Bartolomeo Cristofori is credited for inventing it in the 1700s.

You’ll want to check out a diagram that identifies the main parts of a piano below.

The housing is the outer body of the piano. For many people, this is also the first thing that they notice in a piano. Aside from the largest part of the piano, the housing or outer body also adds extra depth and resonates to every note produced by the musical instrument.

The housing is commonly made from hardwood like maple or beech. Meanwhile, the outer surface of the lid and rim may be layered with different tonewoods like mahogany, maple, and spruce.

Part of the housing is the lid of the wooden covering of the piano interior. It protects the piano interior when the instrument is not being played. When the lid is raised, it helps increase overall volume, resonance, and sound projection throughout the room. The lid dimensions may increase depending on the size of the piano. For example, a grand piano has a larger lid because it is wider and takes up more space than an upright piano.

Made of cast iron, the inner frame is one component or part of the piano that adds a lot of weight to it. But it’s easily one of the most integral parts of the musical instrument, maintaining the high tension of the soundboard and supporting the pin block, which results in a clean sound produced by each string.

Since we’ve mentioned the soundboard, let’s discuss briefly what it is. A prominent component of the inner frame, the soundboard is also called the wrest plank. It is typically constructed from layered maple and reinforced with wooden ribs for enhanced durability and resonance. As the name suggests, the soundboard is where the strings of the piano are stretched over.

In high-end pianos, soundboards are usually made from a tonewood like a Sitka spruce. Cheaper pianos, meanwhile, have a soundboard made of plywood. It may not produce a rich sound but still gets the job done, so to speak. The end of the soundboard features a series of metal bridges.

It’s hard to argue that the keyboard is the part of the piano that most people are aware of. After all, we usually picture a pianist working on the keyboard.

The keyboard is the playing medium of a piano. There are 88 keys on it and housed in a keyframe, which in turn, rests on a keybed. The white keys are often referred to as ‘naturals’ while the black ones are sometimes called ‘enharmonics. In the past, ivory was typically used for white keytops in pianos, but these days, synthetic ivory is the more commonly used material. The black keytops may also be made from ebony or synthetic resin.

The keys are ideally cut from the same piece of wood. This is for unifying any warping or changes that could happen due to years of use as well as humidity. The wooden keys are also seasoned to lower the risk of such changes, ensuring that the piano would feel smooth and nice to play for years to come.

The piano action consists of levers connecting the piano keys to hammers that strike the piano strings. This part of the piano doesn’t get much appreciation as the keyboard, but it can be argued that without it, then the piano won’t be able to produce music at all. In music, ‘action’ pertains to the pressure exerted against the string of an instrument to produce an audible note. In pianos, the action determines the weight of the keys and also affects the touch of the musical instrument.

When a piano key is pressed down, it also causes the lifting of a hammer which in turn strikes a corresponding string. The vibration travels down the piano string and across the soundboard, with resonance and tone picked up along the way. On the surface, it sounds like a long process, but in reality, these things happen quickly when you play the piano.

By now, you likely understand that the strings of the piano are where the sound of the instrument starts to be produced. Once you press the piano keys and hit those hammers, the strings produce a vibration that travels across the soundboard.

Piano strings are crafted from steel. Their thickness differs along the length of the keyboard. Bass strings are the thickest, while the treble notes are thinner. String tension is essential when tuning a piano. Each string is calibrated to keep the instrument sounding at its best. The manner you press each key will also have an impact on the piano’s action on the strings, and consequently, how each note would sound.

The dampers may be as visible as the other piano parts like the keyboard, but this doesn’t mean that it isn’t as integral as the other piano parts. After all, it controls the damping or stopping of the vibration of the strings. It is found on the majority of strings on the piano. It should be noted that not all strings have dampers like the extreme treble strings because these don’t produce as much sound as the thicker and longer strings.

The damper is often made from wood. It consists of several parts, although the most important of these is the damper head. It is a small wooden pad with felt pads attached to its bottom. It rests directly on the string when at rest to prevent string vibration. Other parts of the damper include the damper lever, damper flange, damper wire, and damper guide rail.

How does the damper work? When it’s raised, it also lifts the felt pad, and this frees the string to vibrate once you play the piano. The damper then comes back down once you lift your fingers from a key. This lets you affect the duration of the note that you play, allowing you to set up various musical techniques like staccato.

Last but not least is the set of pedals located at the bottom part of the piano. Pedals are designed to alter or change the tune of the piano. Pianos can have three or two pedals.

In a piano with three pedals, the one that’s farthest to the left is called the soft pedal. The middle pedal is the sostuneto. It’s designed to lift the dampers off of each note. The farthest to the right is called the sustain or damper pedal. It’s also fondly called the ‘loud pedal.’ Pressing this pedal down lifts the dampers off of every string in the piano and transferring energy to produce complex and rich audio.

Now you may wonder—why do some pianos have three pedals while others only have two?

It depends on the type of piano. Grand pianos commonly have three pedals, while upright pianos only have two. In the case of the latter, the middle sostenuto pedal is usually the one that missing. The left and right pedals are considered essentials and, therefore, are a fixture in pianos regardless of their type.

Anyway, the pedals are supported by the pedal support structure, which is essentially part of the piano case. Trapwork, meanwhile, pertains to the system of levers and springs that the pedals operate.

Since it has many keys, hammers, and strings, the piano may appear to be difficult to play at first. Its size can also make it even more daunting. But if you know its parts and what each piece does, you’ll be able to better understand how the piano works and recognize when there’s an issue.

As you have seen, the piano is a complex musical instrument consisting of various parts that work seamlessly together to produce rich and beautiful music. Learning and appreciating the piano parts can help you better understand the instrument and perhaps improve your skills in playing it.