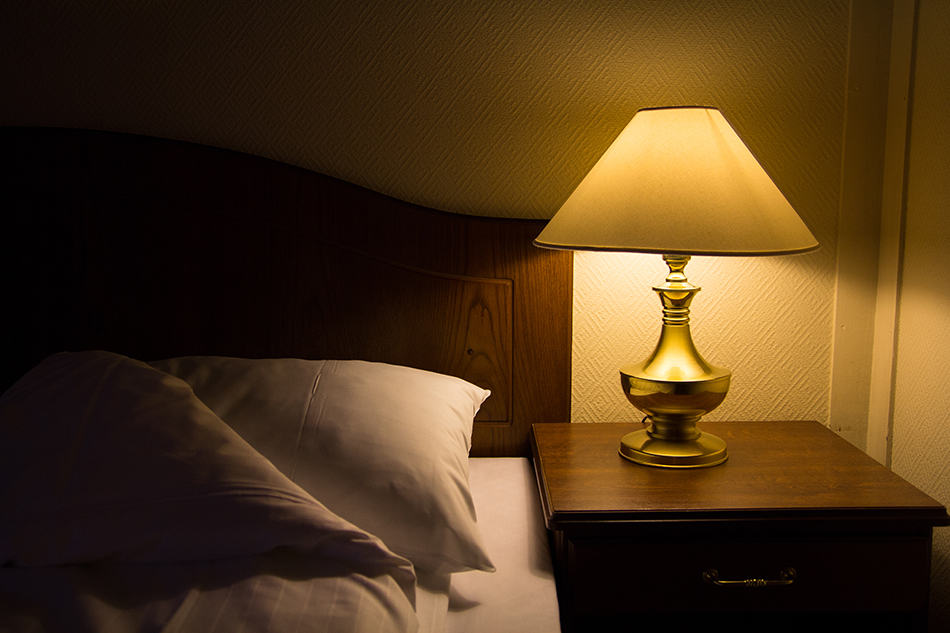 The lamp is one of the more enduring pieces of furniture in the living room and bedroom. It’s been in existence for many centuries now yet remains very much a common fixture in many homes and offices.

It’s been said that the earliest lamp was invented in 7000 B.C. But it is far from the lamp you see at home or in your office. It is believed to have consisted of a hollow rock or shell filled with moss or a similar material soaked with animal fat. The rock or shell was then ignited by the earliest humans. Wicks would eventually be added to control the burning.

By the 7th century B.C., the Greeks had started to make terracotta lamps in place of handheld torches.  In fact, the word ‘lamp’ comes from the Greek word lampas which means torch.

It was only in the 18th century when a major improvement in lamp design was introduced with the invention of the central burner. By this time, the fuel source was now enclosed in a metal, and there was already a metal tube for controlling both the fuel burning and light intensity.

These days, a lamp is not only a source of heat and lighting. It also serves other purposes. It can enhance the look and feel of any room.

Whether you’re looking to repair a broken lamp or you have plans of building your own, it would help to know the various parts of a lamp.

Parts of a Lamp

The custom diagram below identifies every major part of a lamp. And there are explanations of the terminologies of lamp parts in the following sections. 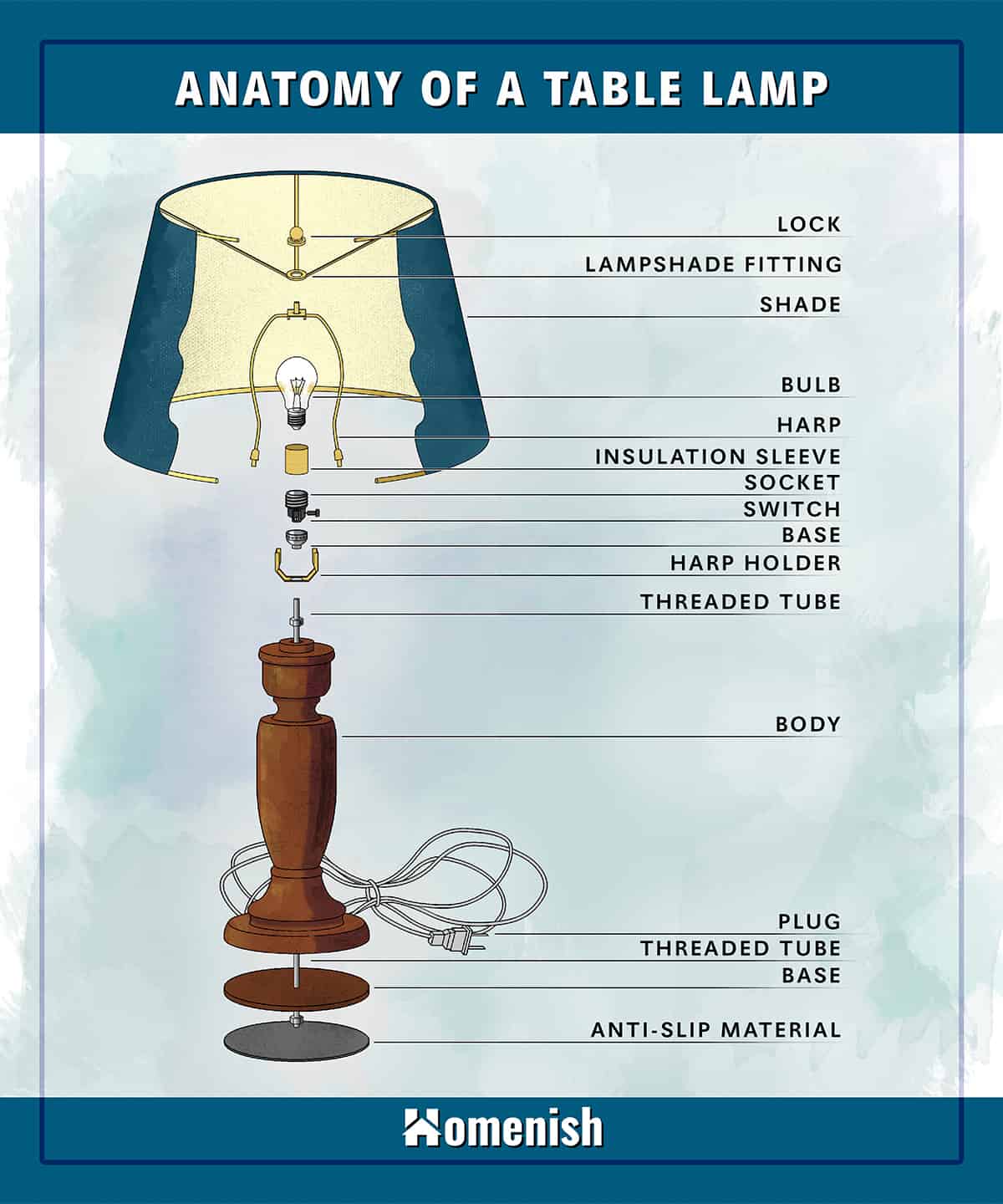 This is the overall frame design of the lampshade, which mainly will define the top look of the lamp.

While not as critical as the two aforementioned parts of a lamp, a lampshade can help protect people’s eyes from the brightness of the bulb. It comes in various styles and designs. It can also be made from different materials that range from plastic, fabric, metal, and glass.

You can argue that without a light bulb, then it’s not a lamp at all. Most contemporary bulbs make use of the standard 120 watt or 120-volt light bulb, although it is not the only style available in the market. There are newer and more energy-efficient light bulbs that not only use less energy but can last up to 10 times longer than a standard bulb. Halogen bulbs, in particular, are more efficient and longer-lasting than conventional bulbs.

Some bulbs are intended for decorative purposes and to add a touch of elegance to a room. Their shape or color may be different as a result. You can find decorative bulbs like candle bulbs that take the look and design of a flame. Others have round globe shapes, which can be considered a variation of the standard pear-shaped bulbs. Meanwhile, you can also come across novelty bulbs with unique shapes and painted designs.

Aside from aesthetics, other factors may influence your choice of a bulb, such as electrical constraints, environmental factors, functional requirements, and local regulations.

This functions to hold and support the lampshade, and the bulb.

How important is the switch in a lamp? Simply put, without a switch, you can’t turn on and off the light bulb. The switch can be integrated into the lamp or separated and mounted in a nearby wall.

While all switches for lamps operate by closing the circuit loop, there are also different switch varieties with varied functions. Push buttons, rocker switches, and toggle switches are commonly found in many houses across the country. These are switches with only two positions, switch on and off. On the other hand, dimmer switch and variable brightness knob allow the user or operator to offer varying levels of light. These are highly useful for people who like to use lamps as a source of light for reading.

There’s also a more modern variation or type of switch, which is the touch-activated. As the term suggests, the bulb can be switched on with just a mere touch of the base of the lamp. Also, this type of switch allows adjustments in the brightness of the bulb, much like a variable brightness knob. There are many types of lamps where the switch is placed on the plug.

The base provides the lamp with most of its physical form. It may be in the form of a simple stand or more ornate ceramics. Some stands are simple solid pieces, while others are more complicated with hinge mechanisms.

Similar to the lampshade, the base of a lamp serves functional and aesthetic purposes. It can also be crafted from almost any type of material.

This is an optional part, whose function is to connect the light wires from the body to the base and the bulb.

In some types of lamps like the table lamp, there is a body, which is the lower part of the lamp. If you want a luxurious decorative lamp, this part is important as it will affect how your lower part design, or even the whole look of your lamp.

The power of a lamp is commonly provided by a simple cord connecting to an electrical outlet. But some lamps have their light fixtures installed on a ceiling or wall with the wire directly connected to the electrical system.

There are also portable lamps like flashlights and camp lights which make use of batteries as their main power source. Other like garden lights and emergency flashlights make use of power from solar cells or a crank generator.

How to Clean Your Lamp

Lamps are generally easy to clean and maintain. But it doesn’t hurt if you clean it regularly, right? Regular cleaning of the lamp can remove dust that may affect the brightness of the bulb.

Before cleaning the lamp, unplug it first from its power source. You should also disconnect t from all power outlets. Unscrew the articulations so that you can move the arms more easily. This would also ensure that you won’t cause any permanent damage to the lamp.

Take off the light bulb. Clean it using a soft, clean cloth. You may also dampen the cloth with a mild solution of soap and water to keep the dust away for a prolonged period. Thoroughly rinse the cloth again before redoing the whole process.

In short, the lamp may be a common fixture in our house, but it’s highly recommended that you clean it regularly to ensure its long life.