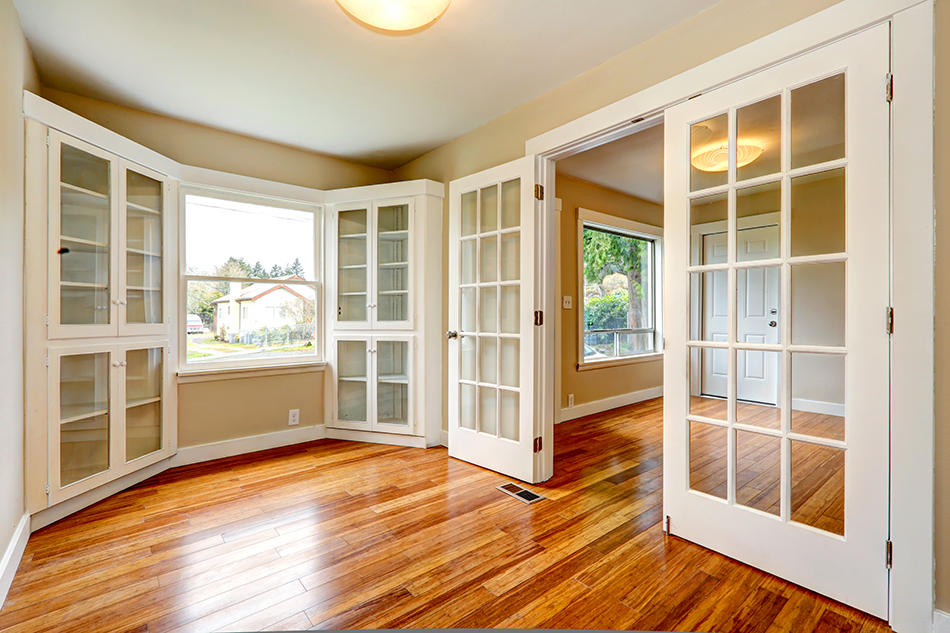 Are you contemplating adding French doors to your house? This could be one of the best home improvement moves you can make.

French doors are a type of door with two sections moving on hinges that are found on the opposite sides of the door frame. The door can either close or open in the middle. Glass panes construct the door section, which could either be a single large pane or smaller individual glass panels called window grills. French doors can be added to your living room, dining room, or bedroom, although these are commonly used on the patio. 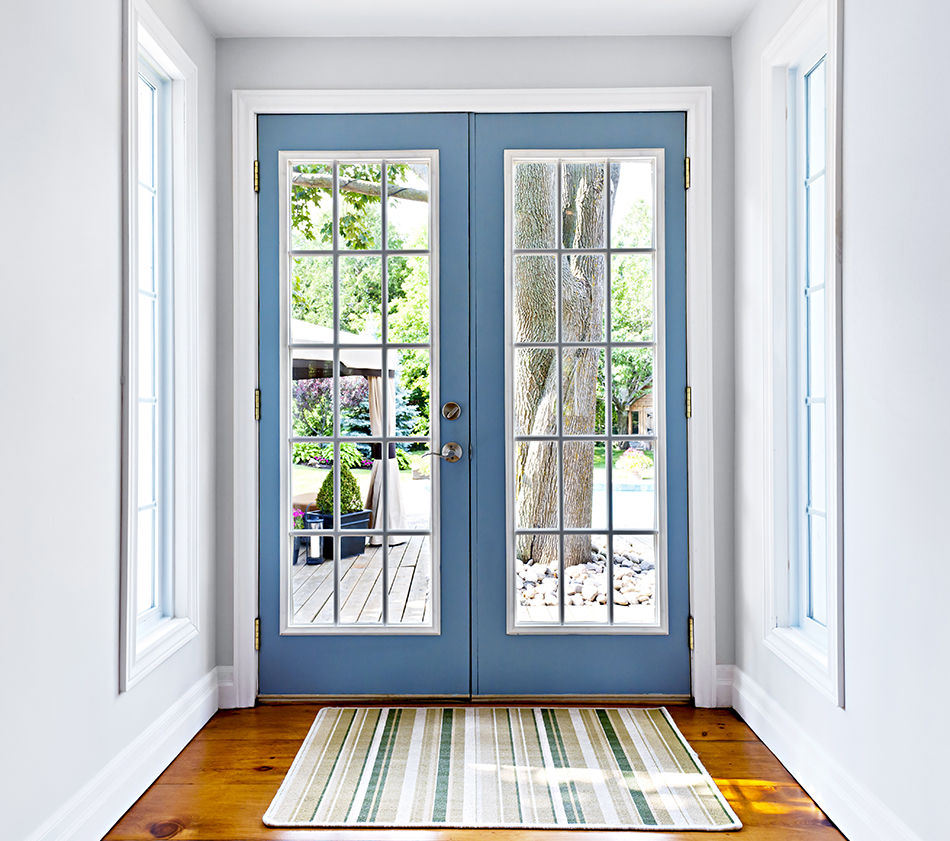 For many homeowners around the world, a French door isn’t just an entry or exit point. It’s also a part of the house that can add elegance and beauty to your place. Below are some of the benefits of installing French doors in your home:

French doors were developed in France in the 16th century as a means to let light enter dimly-lit homes. Centuries have passed, and the main function of French doors remains significant or relevant even up to this day. Many homeowners elect to have French doors replace windows in their house to let natural light in. French doors not only serve as another entry point but also make home interiors look more spacious and inviting.

Another reason to install French doors at home is to save on energy. Because French doors let natural light enter a house, there’s a reduced need for artificial lighting. You won’t have to turn on the lights inside your home during the daytime when you have French doors.

Plus, most French doors have heat-reflective glass. This reflects the extreme heat from the sun during the summer season. It also traps interior heat during the colder months. This characteristic reduces the need for artificial cooling during summer and heating systems during winter. As a result, you can benefit from lower energy consumption and reduced energy bills.

It increases security in the patio and balcony

Many people think that this type of door is not secure because of the huge glass panes in French doors. But this is far from the truth! Most contemporary French doors are reinforced with laminated safety glass that practically makes them indestructible. French doors are as secure as other door types. Also, French doors these days have multi-point locks for enhanced security.

But this is not to say that a French door is perfect. It has its share of weaknesses. One disadvantage of installing a French door is that it would require additional floor space. This is very much true if swinging doors are paired with swinging screens. Also, French doors are always subject to the elements. A French door that swings out may be exposed to the harsh rays of the sun, while one that swings in may bring in water.

French doors also require some maintenance. For one, tracks must be kept free of debris. You would also need periodic replacement of weatherstripping. Hinges, meanwhile, need to be tightened once in a while. Finally, French doors can put you in view of other people. As such, you would need to put on blinds or shades for privacy, especially at night.

DIYs or Hiring a Professional

Do you think you can install French doors by yourself? If you’ve had some DIY experience in the past and undertaken some home renovation projects before, then you might be able to pull off the task. But if you’re a novice to DIY and you struggle to do simple tasks like painting the wall, then you might consider getting professional help.

It’s also advisable to seek some professional assistance if you’re to pursue your French doors installation project. Installing French doors is quite difficult for one person to pull off, and you’ll appreciate getting an extra pair of hands to finish the job quickly. This is particularly important as you’d want it done in one day and not risk opening your house overnight and to potential burglars. And who would want to spend many hours toiling on a project, right?

If you’ve decided to push through with the DIY installation, you’ll need to make some decisions. One of these is the type of French door to buy.

Types of French Door to Buy

There are two standard types of French doors: in-swing and out-swing. The latter type lets you swing both doors open. It’s also recommended if you want to utilize the interior wall space near the doors. On the other hand, an in-swing door is best if you have limited outdoor space.

Speaking of space, you must have a plan for it, specifically around the door swing. After all, a French door is unlike sliding doors and pocket doors as it needs more space to operate. How do you do it? Measure the width of the door and draw a radius around the point of pivot on both sides of the jamb. You’ll determine the amount of space you’ll need to install the French door.

Also, you’ll need to choose the design, window and glass types, color, size, and material of the French door. In terms of design, the most popular for French doors is the divided-glass panes. Most manufacturers produce standard French doors that are measured and fabricated to fit standard door openings. You may also have the French door custom made to suit unique spaces.

The standard French door sizes start at 1 foot 6 inches with increments of 2 inches. As for the height, stock French doors are available in measurements of 6 feet 8 inches and 7 feet and 8 inches. You can also opt for custom sizes if you live in an older house or your door opening is unusually sized.

How to install French doors – Things You Need

First, you should prepare tools such as a hammer, pry bar, finishing nails (#8 and #6), tape measure, and safety glasses. You would also need some wood pieces for shimming.

Ordering a pre-hung French door is the easiest way to install this type of door. Pre-hung French doors have jambs, hinges, and thresholds already included in the kit. This gives you a seamless way of attaching your new door.

If you ordered a pre-hung French door, first check the items included in the French door kit. Normally, fixings and things such as door furniture are already included. However, it may also include only the frame and the door. You should also see if the kit comes with installation instructions.

Now, let’s look at how to install French doors in an existing opening.

Installing French doors in an already built or existing opening involves removing the old frame and trim, installing the new frame, making adjustments, and securing the frame as required.

First, determine the opening of the space where you plan to install the doors. You could likely remove the drywall. Another option is to trim around the space. The safest way to do the latter without damaging the wall is to apply caulk around it before prying it off with a prybar. Then measure the width once you have removed enough drywall.

Next, remove the head and inside jambs which are commonly nailed together. After that, slide the pre-hung doors into the rough opening. Make sure that the jambs are flushed well with the wall. Further, check that the doors will open in the desired area without any obstruction.

Shimming the jamb plumb is the best way to ensure that the door is level and straight. Inspect the top and outer corners of the doors where they meet to determine which side of the jamb you would shim. The jamb of the door that is lower at the top corner must be shimmed. This way, the outer corner will be raised. Slip the shims under the side jambs until the head jamb is straight or level.

That’s it, you’ve installed French doors in an existing opening!

Now you can test the door if it opens and closes smoothly. Complete the task by installing the remaining hardware, such as the handles and doorknobs.

Installing French doors could be a great way to spice up your house. It can make your space more inviting. And it can add a touch of elegance to your place.

While installing French doors isn’t for the novice DIYer, you could pull it off by getting the right pre-hung French door kit and getting some help from your friends. 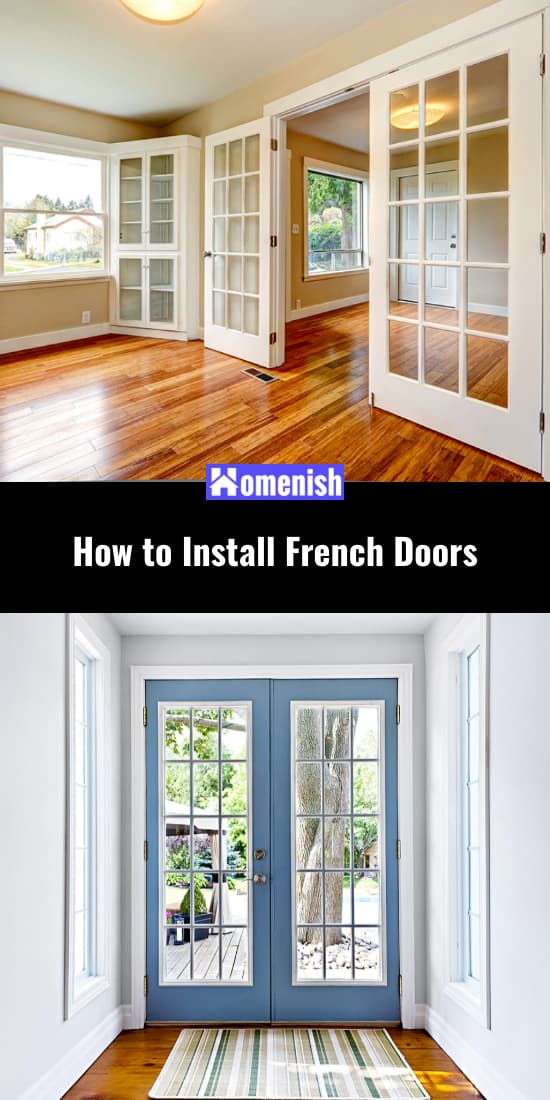