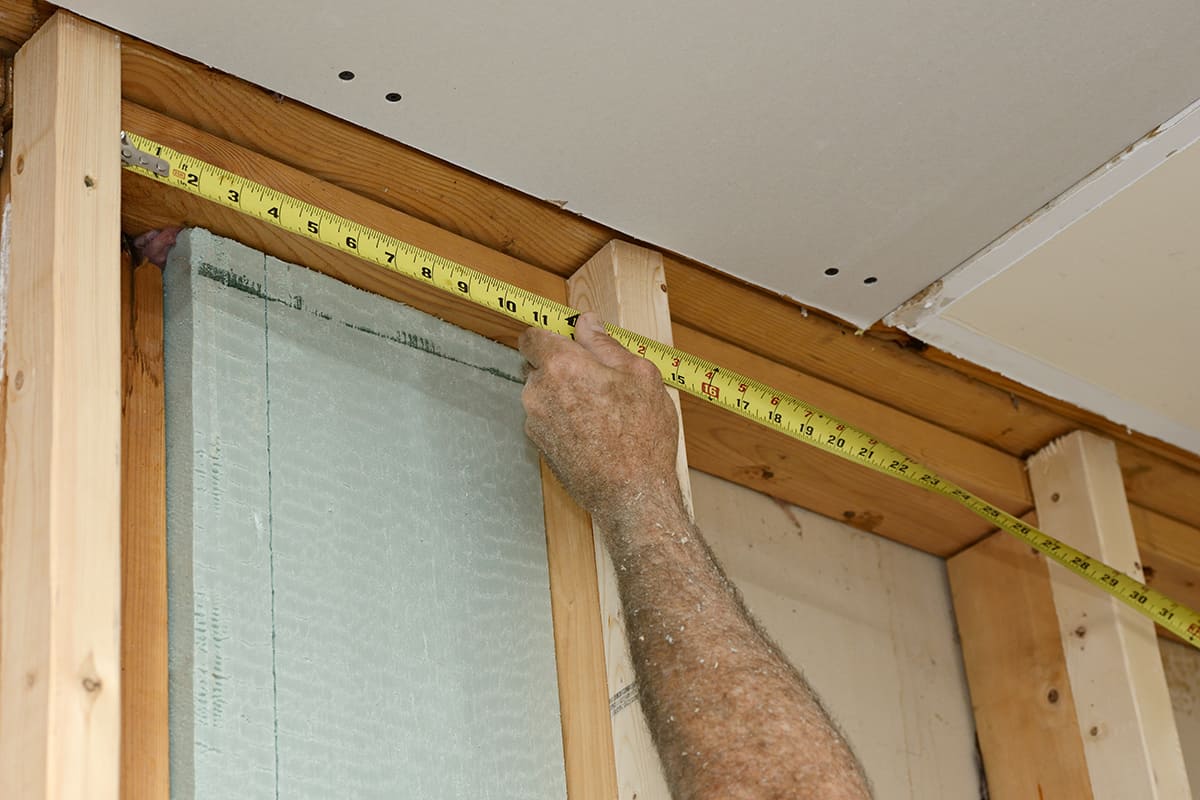 Studs are the pieces of lumber that run vertically inside internal walls, holding the drywall in place and creating a frame for the room.

Locating a stud in a finished wall can be difficult unless you have x-ray vision, so it helps to know how far apart studs are and where they are most likely to be. 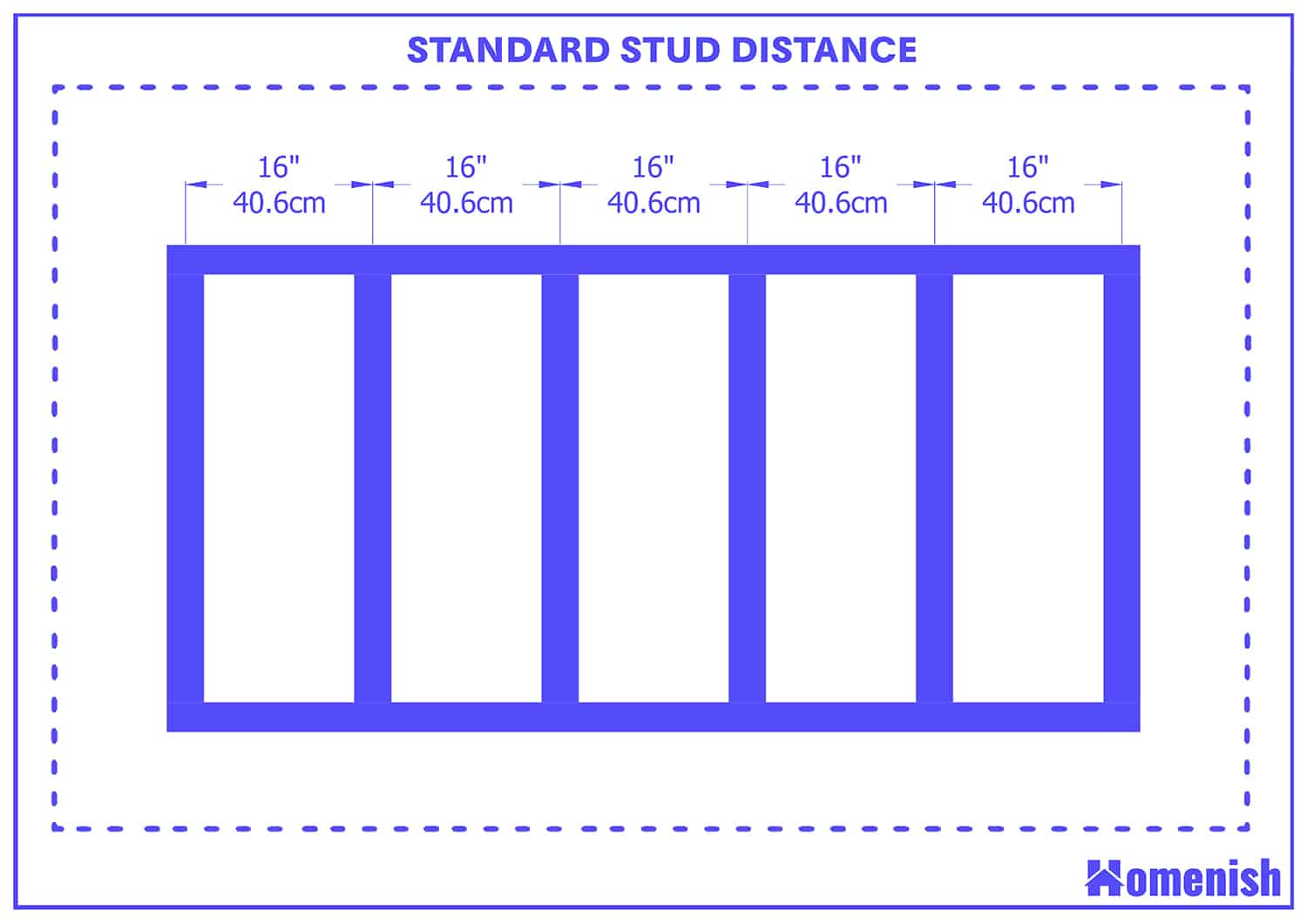 Studs are measured at 16 inches apart on the center. This is a standardized measurement that is used across the construction industry because it is what most building codes recognize as the best distance between studs for buildings to have structural integrity.

Having a set distance is useful for builders and homeowners so that you don’t need to pull your drywall down just to find the studs. Knowing that the distance between the center of each stud is 16 inches means that everyone knows where they stand, and it is easier to find studs when you need them.

If you are renovating your home and pull back the drywall to reveal the studs, it’s always a good idea to take a photo of the studs before you replace the drywall. This will be really useful to refer back to in the future if you need to locate a stud, as you’ll have a good visualization of where it will be.

If you have ever needed to hang a heavy frame or a piece of mirror on the wall, then you have probably spent time trying to locate a stud. This is a tricky task because, essentially, you are trying to find something that you cannot see; you just know that it is there somewhere behind the drywall!

Finding the stud to hang a heavy picture is essential because your fastener will grip onto it much better than it would if inserted just into drywall.

The weight of the hanging object can pull the fastener right out of the drywall and leave damage behind it, whereas if you fix it onto a stud, then it will be much better supported and be more likely to stay in place for a long time. If you want to find a stud in your walls, then there are some key things you should know that will help you out.

This is helpful to know because it means if you can locate one stud, then you should be able to locate the other studs by measuring in increments of 16 inches. The exception to this is in older homes where studs can be as much as 24 inches apart.

Studs that are in the middle of a room could be positioned pretty much anywhere, so you would be guessing if you just started nailing holes into the wall, hoping to hit a stud. However, there are certain points in the room that always have studs, and therefore you can measure 16 inches out from these if you know where to find them.

If you have baseboards or molding trim in your room, this will usually have been fixed onto studs with nails. If you can find the nails in your baseboards, then you can use this as a guide to find where your studs are.

Ordinarily, the baseboard will have been nailed onto the stud and then filled with decorators caulk and painted to create a seamless finish, so if your builders have done a flawless job, then it can be very difficult to find where the trim has been fixed to the stud.

However, if you look carefully around the room, you might be able to find one or two examples of where the baseboard isn’t perfect; it might have a bump where the caulk hasn’t been smoothed down, or it might have a dimple where the nail was inserted.

Once you have found these, you can measure in 16 inches increments horizontally to find the studs, and then measure upwards in a straight line to find a higher point on the stud where you can hang a frame.

Power outlets and light switches are also items that are usually fixed onto a stud. These won’t be centrally located on a stud but instead will have one side screwed into a stud.

To find which edge of your outlet is attached to the stud, knock on the wall and listen to the sound it makes. If it sounds hollow, then there is likely no stud there, whereas if it sounds more solid, then you have located the stud. You can use this as a starting point, measuring 16 inches out to find the next stud, and so on.

If you would prefer to use a tool to locate studs, then you can buy a stud finder. These are small battery-operated tools that beep when they find something solid behind drywall, so you have to be careful that you have not accidentally located a pipe.

The best way to do this is use a stud finder tool in conjunction with the measuring method. If your tool beeps at every 16 inches along the span of a wall, then you can be sure it is a stud you have located. Some people swear by these stud finding tools; however, others find they aren’t quite as reliable as they claim to be.