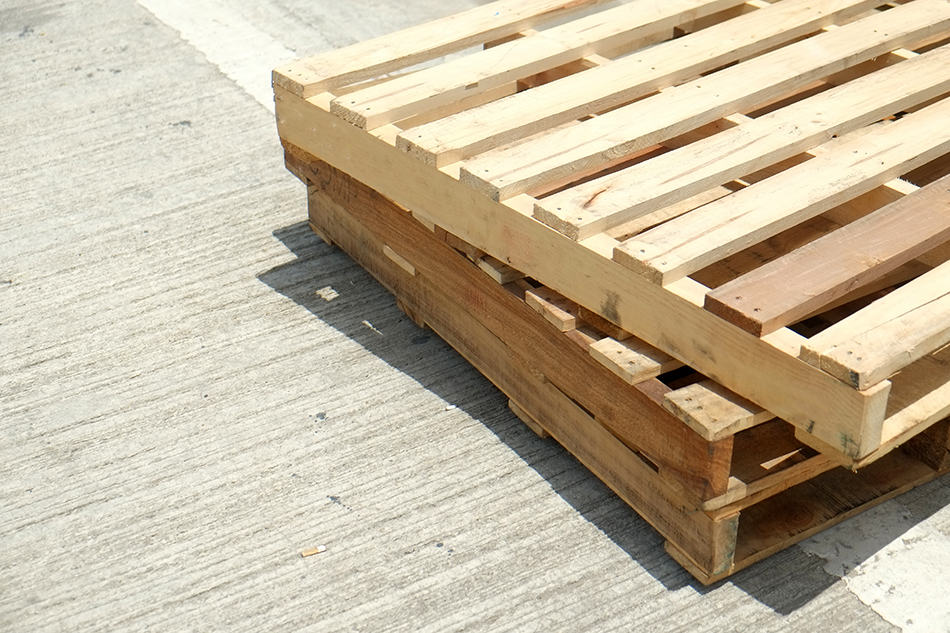 A pallet makes the transportation of goods exceptionally efficient. They are those flat structures that stabilize and support heavy goods as they’re lifted by a pallet jack, forklift, front loader, erect crane, or any other jacking device. The importance of pallets cannot be overstated. They protect, stack, store, and transport materials in the most organized way possible. Pallets are a versatile furniture piece – there are many DIY tutorials for tables, chairs, bunk beds, shelves, etc. made from pallets

Pallets come in all kinds of sizes, but they all have the same basic parts, which include:

Stringers are also sometimes called runners. They are long beams used to separate and support the top and bottom decks of a pallet. A pallet has three stringers, two at the side and one at the center. All three stringers support the deck boards. Stringers usually measure about 2″ x 4.”

These are sometimes used as a replacement for stringers.  They can take different shapes, rectangular, multi-sided, square, or cylindrical, and you can often spot them by their location on the pallet. They’re usually positioned as a center or middle block, corner block, end or edge block, or an inner block.

You’ll find notches at the lower part of a stringer. They are openings through which the pallet can be lifted with a forklift. Most stringers on pallets have two entryways.

You’ll find deck boards at both the top and bottom of every pallet. There are several of them placed perpendicular to the stringers to form both the bottom and top layer of the pallet; sometimes, they support the top only. Either way, deck boards provide support and stability for a pallet.

Lead boards are two pieces of lumber located at the front and bottom of a pallet, respectively. The woods used for lead boards are usually wider than the ones used on the inner boards. This serves the purpose of increasing the structural integrity of the pallet. Lead boards typically measure 5.5 “wide and are sometimes called 6-inch lead boards.

Chamfers are entryways found along the whole length of the edges of the deck board. They can be found either between the stringers or the blocks, depending on the kind of pallet.

Inners are boards installed in between the lead boards. The number of inners on a pallet is usually dictated by spacing requirements. Most inner boards typically measure 3.5″.

Spacing refers to the gap in between the deck boards. Planning the space on a pallet’s deck board is important as the space would determine how well the pallets can carry suitable loads without the loads slipping into the pallet.

The following are words you’ll frequently use when talking about a pallet:

Span describes the distance between the stringers or blocks supporting the deck board.

This refers to the vertical distance from the floor to the top of the deck boards.

This refers to the end-to-end distance of the stringer.

This describes the process of using heat to sterilize a pallet using through the kiln process. This process requires heating the pallet to 56 degrees Celsius or 132degrees Fahrenheit for at least thirty 30 minutes.

This describes pallets that have their deck boards flush to their blocks or stringers.

A plug is a repair board linked to a broken stringer to make it functional again. A plug can be attached to the whole length of a stringer or just to one section of the stringer.

This describes the lower surface of the pallet, the part that bears the load.

A pallet made specifically to be used in just one single facility; this kind of pallet cannot be shared or exchanged.

This describes a wooden collapsible bin that converts a pallet into a box.

This describes a pallet with both a top and bottom deck as opposed to bottom deck pallets.

This describes a pallet with no bottom deck.

When a pallet has its top and bottom deck boards extend further than the edges of the stringers, they’re said to be double-winged pallets.

Expendable pallets are designed to be handled several times during shipping on a single trip. It is usually discarded at the end of the trip

Shipping pallets are specially designed for just one one-way trip from shipper to receiver; they are disposed of at the end of the trip.

These refer to staples, nails, screws, bolts, and other mechanical tools for joining the components of a pallet.

Free span is the distance from one support on a warehouse rack to the other.

Handling refers to the picking up, moving, and setting down of an empty or loaded pallet.

This refers to the intersections where the different parts of the pallets join. These joints can be found at the corner joint, end joint, or center joint.

Stringer pallets are the kind of pallets where stringers, instead of blocks, are used to support the deck boards. Pallets can have anything from two to five stringers depending on the size of the pallet. Stringers typically measure 2 by 4 inches.

This refers to the kind of pallets where blocks instead of stringers are used to support the deck boards. These blocks can take several shapes, such as cylindrical, square, or rectangular.

4-way pallets have notches cut into their stringers so that a forklift can enter the pallet from any side.

2-way pallets only have openings for forklifts on two sides of the pallet.

These pallets have four-way entry points and are block heat treated. They are the most commonly used pallets for import and export because they are ISO accredited and designed under the strict regulations of the European Pallet Association.