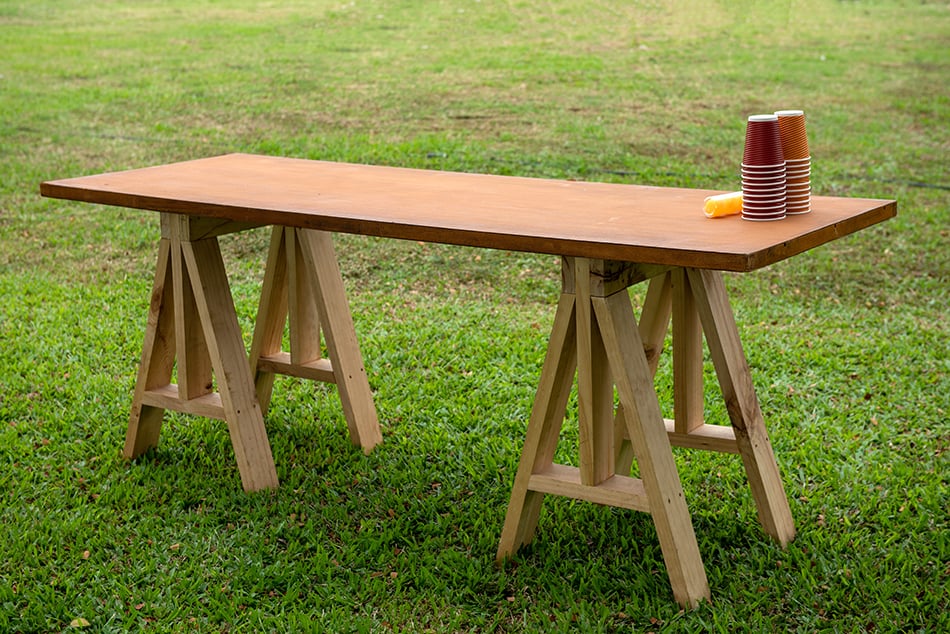 The official size of a beer pong table should be 2.44 meters long and 61cm wide. There is controversy over the height at which a table should be. In most countries, 70cm is the correct height for the table, but in a few countries, the height is considered irrelevant and can be any height.

Find below a drawing of the beer pong table dimensions. 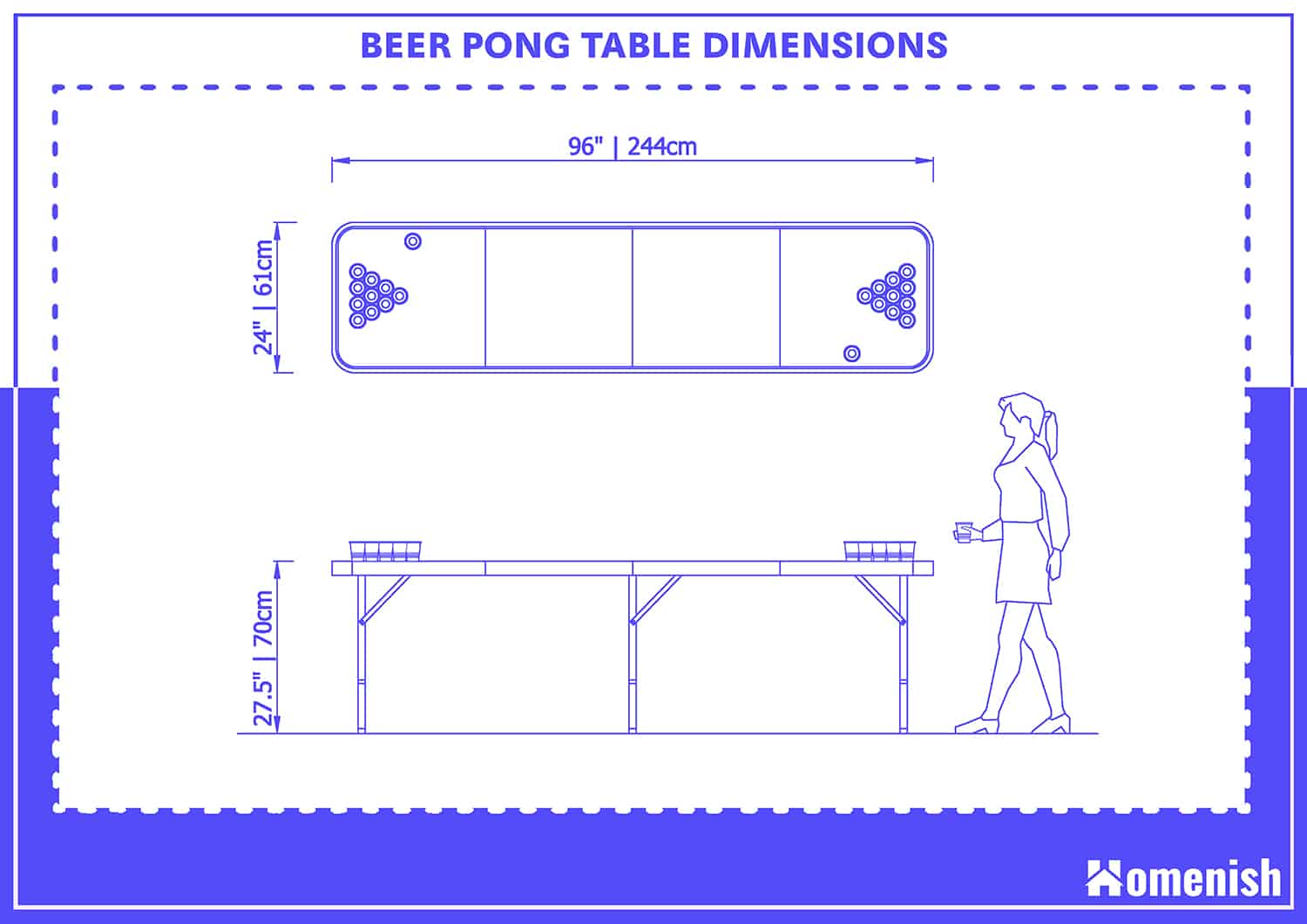 How Is the Game of Beer Pong Played? 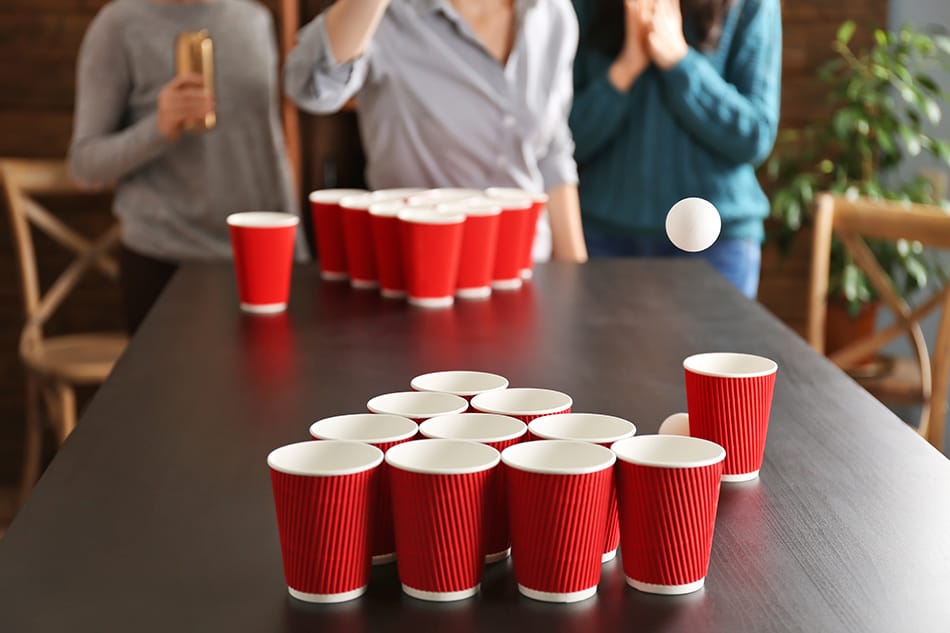 Beer Pong can be played as a game with either 10 or 6 cups, and although the distance between each team’s cups may differ, the correct distance is considered to be 1.65 meters.

There is no correct number of balls required; however, most tend to have several balls in case any get lost in a frantic game. The goal while playing the game is to toss a ping-pong ball from your end of the beer pong table across into the other team’s cups which are filled with beer.

The cups should be in a triangular formation with either 6 or 10 cups. When a ball falls into the cup, a member of that team of whom the cups are in front of must then drink the drink from the corresponding cup.

The goal of the game is to play until you have managed to get a ball in each of the opponents’ cups (which they should have drunk), henceforth the name beer pong.

Where Can One Play Beer Pong? 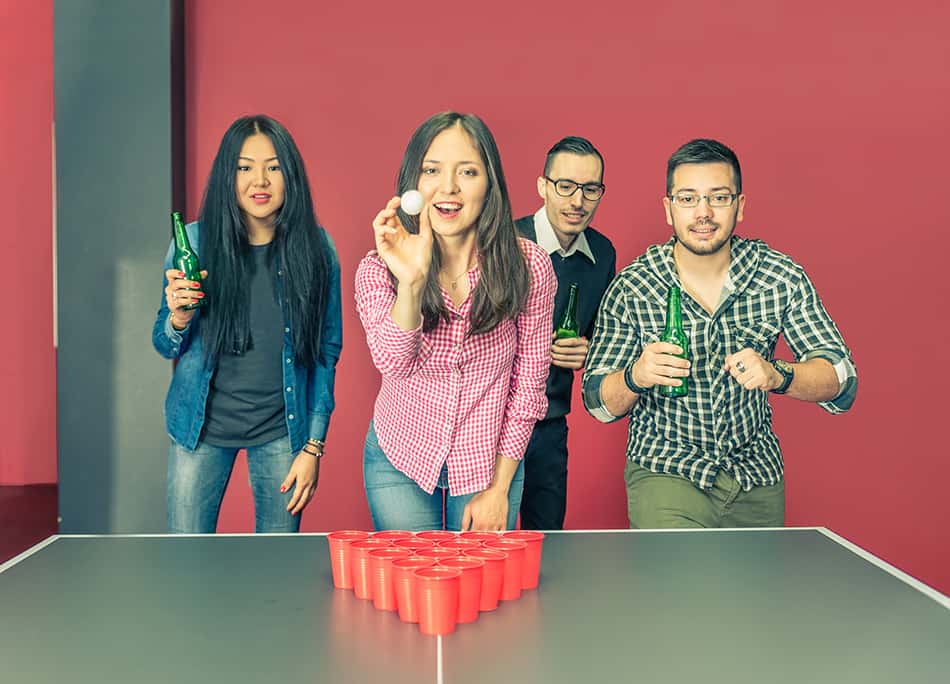 Beer pong is a popular game amongst students and freshers, commonly using red fraternity cups as the cups in a pyramid shape in the game.

Originally this game was to be played as a 1 versus 1 game; however, it has been socially adapted to implement a team game aspect with each team having an equal number of players and rotating taking it in turns to attempt to throw the beer pong ball into the other team’s cups.

There are no official, definitive ways to decide which team goes first; however, with many reproduction versions of the game, there is the “eye contact rule,” which decides which team gets to shoot their ball first. To decide this, each team must designate a person to shoot for them. This teammate must then shoot a ball into one of the opposing team’s cups whilst maintaining full eye contact with their opponent. This makes the process even more difficult and semi about luck as well.

Whilst the game is called “Beer Pong,” there have been many variations of this due to the fact the game usually comprises of several ping pong balls and between 12 and 20 cups. This allows the players to decide which alcohol they place in the cups. There have been variations such as wine pong, shot pong, and various other alcohols.

Beer pong, or any other variant of alcohol pong, is a fun game that can be enjoyed at parties, get-togethers, or gatherings and is widely played globally, first originating in The United States as a college game. It has spread globally and is a very popular game in the UK. It is an affordable and adaptable game that is not only used as a form of “getting drunk” but can be a fun game when the cups are filled with soft drinks or other forms of forfeit.

Some versions of beer pong have the rule which is called “the death cup” this means that if a team manages to land two ping pong balls in a row in the opposing team’s cups, this is then called a death cup, this means that the opponents of who’s cups the balls land in automatically lose and therefore have to drink all of their cups in quick succession and the other team win.

There are as such no rules which state whether a ball should be thrown under or over armed; however, a lot of people consider overarm to be easier and therefore use the rule of over armed only to ensure a quicker game.

When there is only one cup remaining, there is a rule regarding spillages, if the defending team knocks over their cup, then they automatically forfeit and lose the game; however, if the offensive team knocks over the defender’s last cup through either throwing the ball or simply through rowdy behavior then the cup must be refilled, and the game continued.

Another popular rule variation is the rule of “island cup,” this means if one of the cups is a lone cup and not in contact with any others, henceforth the name island cup, and the opposing team manages to shoot the ping pong ball into it then they can also pick an additional two cups from the opposing team’s line-up for them to have to drink. This rule may only be used once per team per game to stop the game from becoming too short.

Of course, If you don’t want to pay for an official version of the game, that’s still okay because this game can easily be recreated at home, all you need is 12 – 20 equal-sized cups and a minimum of one ping pong ball, although several are advisable, lastly you need to have a table, ideally the sizes aforementioned above, but as long as the cups are equally space apart the game is very easy to recreate on a budget.